I’ve had a big crush on wreaths lately. I think they’re such a fun way to dress up your front door for various occasions, and I think they’re especially festive around Christmas. I’ve never really had wreaths before, but this year Corey and I decided that we really wanted one for our home. The only problem? We’re cheap, and cute wreaths are super expensive.

But, you know us – we’re never afraid to try to tackle something ourselves! So, when a 50% off sale hit the Christmas section of Hobby Lobby, we loaded up on supplies. We grabbed a wreath for a whopping $5.00, some pinecones, holly berry branches, and some faux snow. We ended up spending maybe $15 on the entire project. 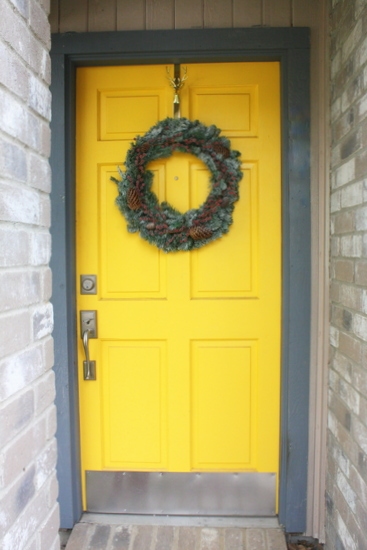 I’ll admit – I was pretty nervous about how this would turn out. I love wreaths, but I’m more than a little picky when it comes to how they look. I’ve seen a lot of homemade wreaths that look obviously homemade, and I didn’t want that for ours. And, I absolutely loathe the look of the super fake, cheap-o wreaths they sell at Hobby Lobby (you know, like the one we bought). So, I really didn’t have high hopes for this project. I kind of figured I’d give it a shot and if it completely failed I would only be out $15 and would have an entertaining post to write.

But I was wrong. It was super easy and turned out SUPER cute. I started out by plopping myself down on the floor with all of my supplies and playing around with it to see what arrangement I liked. I had absolutely zero plan going into this, so I really just started randomly placing things on the wreath until I landed on something that I thought looked good. At first I considered cutting up the holly berry branches so I could put them kind of randomly throughout the wreath, but in the end I decided that I liked them much better if I left ’em intact. After about 5 minutes of playing around, here’s what I ended up with: 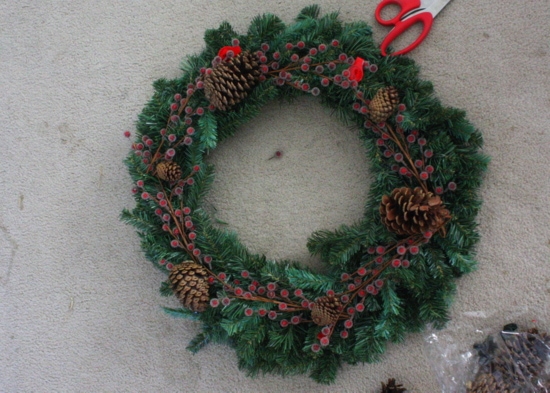 It’s a super simple arrangement, but it manages to cover up the majority of the fake greenery, and I had a good plan to disguise the rest of it, so at this point I was feeling a bit more hopeful about how this project would turn out. Next, it was time to head outside and try out my fake snow. Once again, I totally didn’t have high hopes for this stuff. I’ve never used it before and I had no idea how it would look – I was pretty worried that it would turn out super cheesy-looking, but it actually looked kind of amazing.

I got a bit too excited about the snow and totally forgot to snap photos while I was doing it, but I did take a ton of photos once I’d finished spraying everything down with fake snow, hot-gluing my pieces on, and hanging it up on the front door. 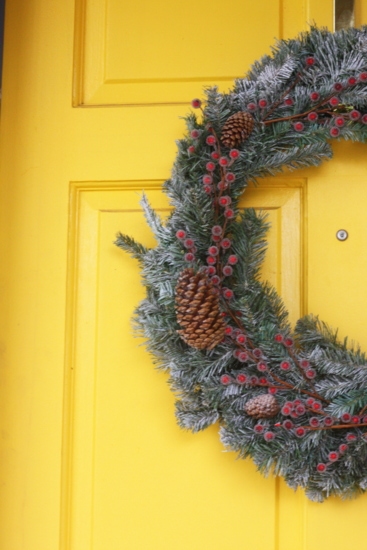 I absolutely love how this turned out, and it makes me smile every time I open my front door now.

Anyone else make any wreaths lately? I think I want to make one for every room of our house now!