There’s just something about an organized home that makes me really happy. Maybe it’s actually being able to find things without having the contents of an entire cabinet fall onto my head, and maybe it’s just the peace of mind of knowing that behind my pantry doors things look nice and pretty. I don’t know what exactly it is, but it’s a wonderful feeling.

That happy feeling I get when things are organized is exactly why I put together this little Organize-A-Thon – and I’m excited to be back this week sharing what we did to make our home a little less cluttered. I’ll give you a hint – it involves those pesky, impossible-to-keep-clean bathroom drawers. Is it just me, or are the bathroom drawers the hardest place in the house to keep organized?

But, before we dive into that, let’s do a quick recap for anyone who isn’t all caught up with the good ol’ Organize-A-Thon. I started this last year as a way to help me get some clutter under control at the beginning of the year, and I loved it so much that I decided to make it a tradition. It’s a pretty simple concept – each week, Corey and I tackle a new area of our house that’s in need of some organizational love. Then, I come back here to report how we did. It’s a great way to keep me accountable and motivated to get things done, and hopefully it can provide a bit of inspiration for those of you who need to get some de-cluttering done in your own home. I hope that at least some of you are playing along at home, because once it’s all said and done I’m going to set up a link party so all of you can link up with the amazing projects you did to get your house organized, too! It’s not too late to join in – even if you don’t get something done every week for the whole month, one organizing project is better than none, right? So far, Corey and I have taken on the paper clutter in our house and several spots in our kitchen.

Okay, now that we all know what’s going on, let’s get to chatting about what we did this week. Like I said before, I’m awful about keeping my bathroom drawers organized. There are so many things I use on a daily basis and I’m constantly grabbing stuff out of them, and for some reason I just can’t be bothered to keep them nice and tidy. What’s worse is that over the last year and a half that we’ve lived here, my drawers have slowly become more and more stuffed-to-the-brim with things that I don’t even need. Which means that when I was first starting this project, this is what I was working with in my bathroom: 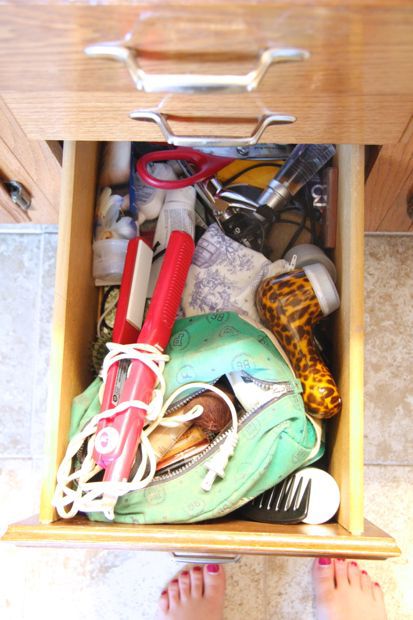 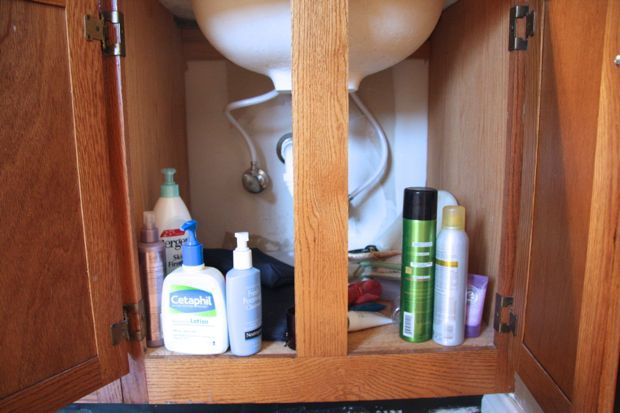 I’ve gotten embarrassingly complacent about the insane mess in these drawers and cabinets mostly because I really only have a few key things that I use on a daily basis, so I would just grab what I need, use it, and close the drawer as quickly as possible without thinking about the mess. But, luckily, this Organize-A-Thon is just the kick in the rear I needed to get this mess under control, so it’s looking a lot better now.

Before I got started, I gathered up all of my organization supplies. I had a few extra baskets and containers laying around the house that weren’t being used, and I also bought a couple of cute blue baskets from Target and a roll of shelf liner to keep things nice and clean (and cute!)

Then I, of course, dumped everything out of the drawer and onto the ground. Only way to see what you’ve got, right? I decided to take it one drawer at a time rather than tossing it all out at once so it didn’t get too overwhelming.

Because, um, one drawer was overwhelming enough. 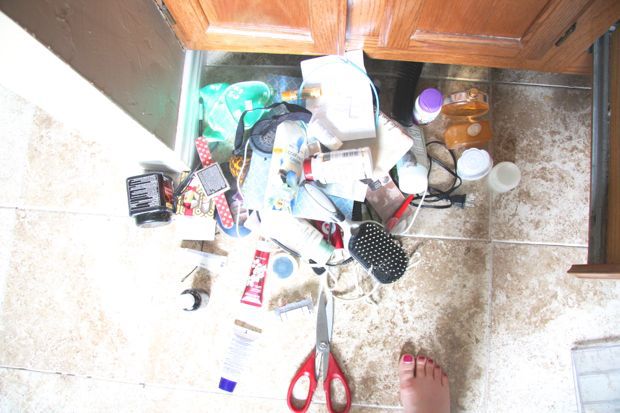 Once I had everything on the ground, I went ahead and lined the bottom of the drawer with the shelf liner. Then I got to organizing. I was able to toss out quite a bit of the stuff that was in the drawer (a lot of it was trash, including a couple of completely empty containers. Seriously. I’m that lazy, apparently).

Once I had the stuff I didn’t need out of there, it was a pretty quick process to put things back in the drawer in an organized manner. I used a long, skinny container that used to be in our pantry to corral my curling iron and straightener, then I just put in the rest of the stuff for this drawer! I decided to use this drawer for the things I use on a daily basis (like my makeup, hair stuff, etc.), and it was pretty easy to finish it up since my makeup and hair supplies (like bobby pins, headbands, etc.) were already in bags. I used one of the blue baskets to keep a few other things like my Clarisonic, perfume, and deodorant from just floating around in the drawer. 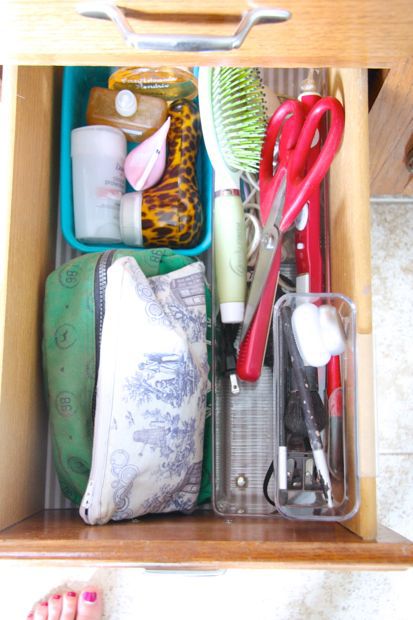 Ahh, so much better!

One of my favorite parts of this drawer? That little hanging basket – I got it from Ikea, and it hangs perfectly on the edge of the drawer (the drawer has no problem closing with it there) and keeps some of my smaller stuff grouped together while still saving room in the bottom of the drawer. Love!

Then, it was time for the other drawer. This was pretty much the same routine as before: dump it out, line the drawer, and put it back in! 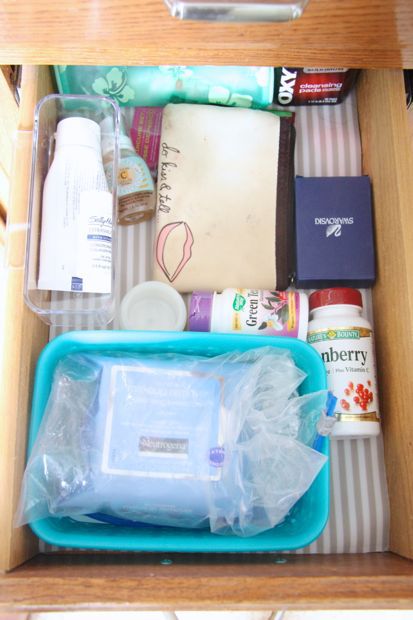 As you can see, I was able to take a lot of the stuff that had been in this drawer and move it to a different place in the bathroom (our linen closet). I had a few different jewelry boxes in there that weren’t being used at all (because I try to keep my jewelry on display now so I wear it more!), so I tossed them into the closet where I can still access them if I need them, but they aren’t taking up valuable drawer space.

Finally, it was time to tackle the space under my sink.

Once I had everything dumped out I pretty quickly realized that what was under here was mostly extra makeup bags that aren’t being used right now. I didn’t want to get rid of any of then (they’re fabulous to have around!), so I just tossed all of them into the biggest one and zipped it up, so they’re nice and contained but still easy to get to. Then, I just put everything back into the cabinet in a slightly-more-organized manner. 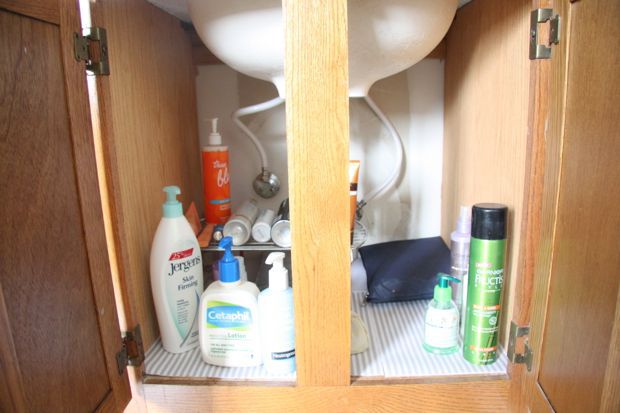 I used one of those wire shelf things in the back, not because I really need the extra space, but so all of my bottles and cans are easier to access. When you have a ton of little bottles in a cabinet like this it can be really difficult to see them all, so I’m hoping that having a few of them elevated will make them easier to see and easier to get to. We’ll see how it works!

And with that, I’ve got a much more organized bathroom. It’s made it much easier to get ready in the morning, and I’m hoping that I actually keep up with keeping it like this!

Anyone else find it impossible to keep your bathroom drawers organized?