Remember when I showed you guys this super cute vanity we scored on Craigslist? And how it finally (!) filled up that empty space in our bedroom?

I even had a nightmare about it the other night.

But, let me explain. I was seriously in love with this guy when we bought it, and I couldn’t wait to get it painted and back in the room. Corey and I waffled back and forth for weeks about what we wanted to do with it,and we finally ended up settling on black. It’s a neutral color (which was important, since our wall color is so bold) but it’s a little more fun and bold than a plain white or gray. We don’t have any black in the room yet, and I’m a strong believer that every room should have a bit of black in it…so black it was.

But, there was a problem.

As you can see, the vanity was still just plain wood and hadn’t been painted. There was a very thin coat of poly on it, but nothing else. I decided to forgo sanding it (a step I skip any chance I can get), and go straight to priming and painting. Only, when I painted it the top looked terrible. Apparently it was a thicker coat of poly than I thought, because it completely messed up the texture of the paint and looked completely ridiculous.

So, I had Corey sand it down for me so I could repaint it.

And when I did? The paint cracked.

This has only ever happened to me once, and I knew what I did wrong that time (put a top coat on before the paint had dried fully). But this time? There was nothing on the vanity, it had been sanded and cleaned, and there was absolutely no reason for it to crack.

This was the first time I considered burning it.

But I forged ahead, Corey sanded it down again, and I gave it another shot.

It looked much better the second time around – I thought we had finally found victory! Until…the next day when Corey (who was genuinely trying to be helpful) sprayed another coat on the top.

For those of you who don’t know, if you wait more than an hour-ish after painting with spray paint, you should wait at least 48 hours before painting again…or it will crack

And crack it did.

(This would be the second time I wanted to burn it.)

I sanded it down (yet again) and tried one last time.

It didn’t crack this time, but there are still some spots on the top with a really weird texture. I have no idea why. I’ve just given up.

But, if you don’t look at the top too closely, it still looks cute! 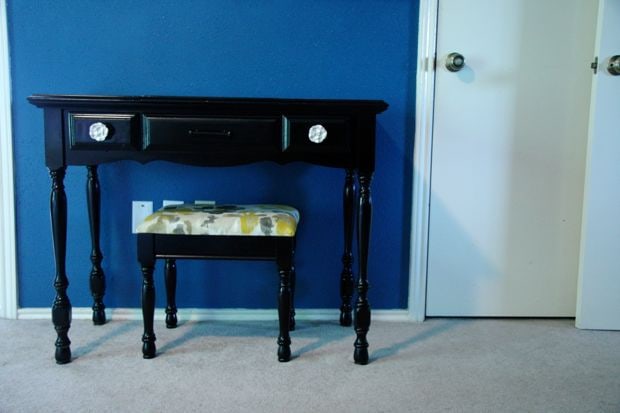 I love the black in the room, and I am SO happy with how it looks in this space. I just try really hard to ignore the weird parts on the top…because I don’t know how to fix ’em and I’m just mad about it. And when I’m mad at things, I ignore them. It doesn’t make the problem go away, but it sure does make me feel better.

I added some fun fabric to the stool (which gave us ZERO problems, by the way) and decided that the vanity itself needed a little bit more fun – so I grabbed a test pot of coral paint from Lowe’s and painted the inside of the vanity for a fun surprise. It’s not something most people will see, but I know it’s there and it makes me smile. 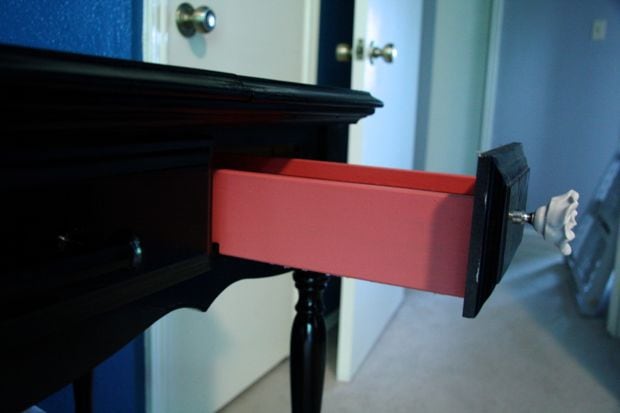 And, with the addition of some super cute flower pulls (that I’ve been lusting after for months but Corey hasn’t let me use them yet because they’re “too girly”), I think I’m hating this vanity a little bit less now.

Maybe once I live with it a little longer I’ll even come to like it. 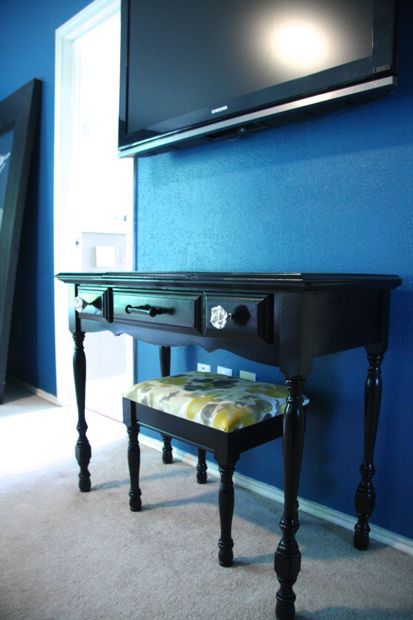 Have you had any projects give you a really hard time lately?