We showed you a lot of really fun projects over the last several weeks as we were a part of Creating With the Stars. I had an absolute blast coming up with everything and Corey and I adore all of the projects we did.

When we showed you photos of them, they were the photos we used for the competition. Which means they were staged like crazy and had to be anonymous, so you basically just saw the project and nothing else.

So today, we’re taking a quick little tour of the four projects we did for Creating With the Stars and checking out what they look like in a real-life setting. Because I like to keep it real around here and some of the projects look pretty different in use in our home than they did in the competition (let’s face it – if I kept all of those cute accessories in the bookcases, I’d have NO accessories anywhere else in my house!).

Let’s kick it off with our week one project. Here’s what it looked like in the competition… 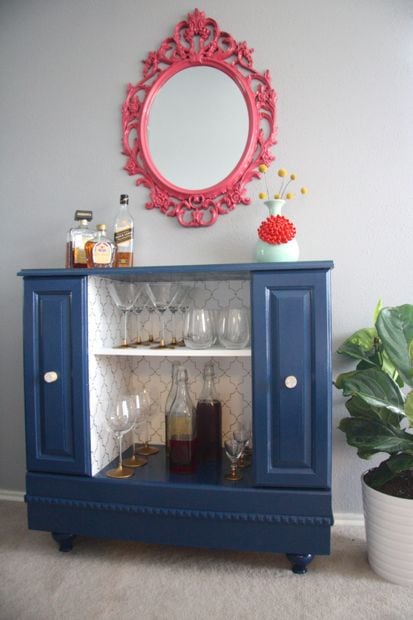 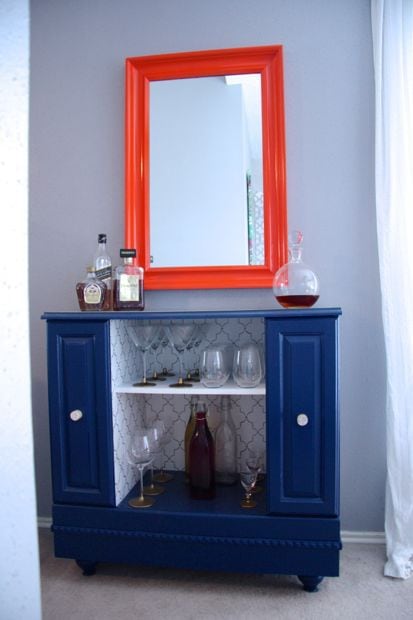 It’s pretty much the same, with just a few changes in the styling. We hung a pink mirror over it for the competition, but in reality the pink looked absolutely crazy up against our curtains, so we switched it up for something a little more suited to the room. I’d like to add some more cute accessories to this guy (so it’s not quite so bare), but I absolutely love how it works in the living room.

Corey and I had been going back and forth on what to put in that spot for a while – it was pretty awkwardly empty beforehand, but we weren’t quite sure what would work best there. Now that we have this here, I can’t imagine anything else. It’s right in-between the dining and living rooms, which makes it perfectly suited to making both drinks to go with dinner and drinks to go with, you know, sitting on the couch and watching television. Love it.

Week two was shot in our bedroom (as I’m sure many of you guessed), but we actually had a different plan in mind for it while we were making it. Here it is in the competition… 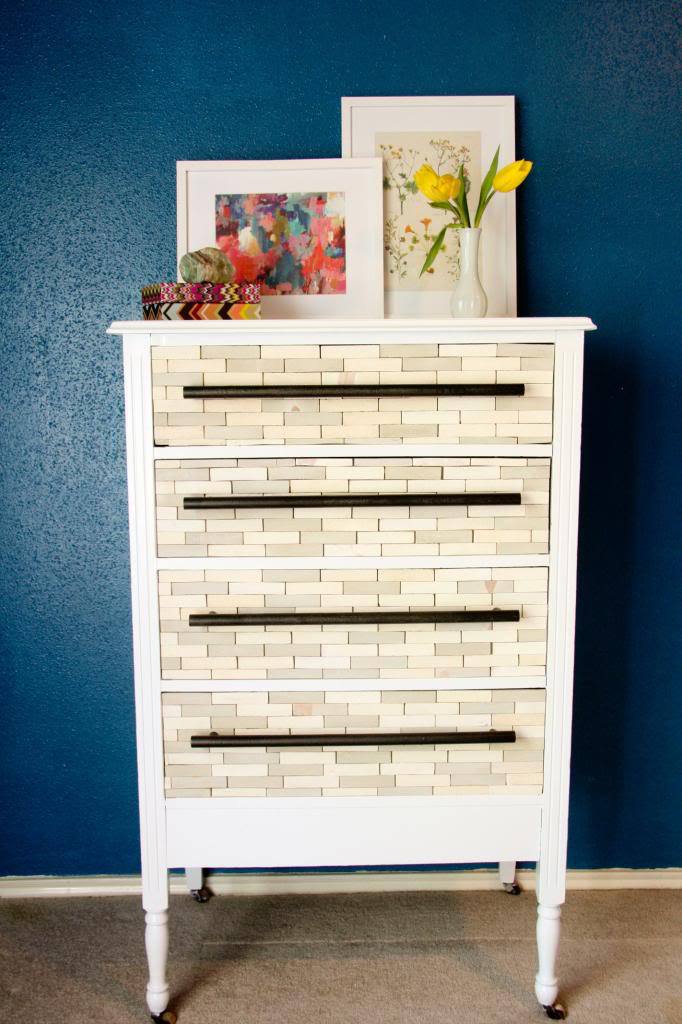 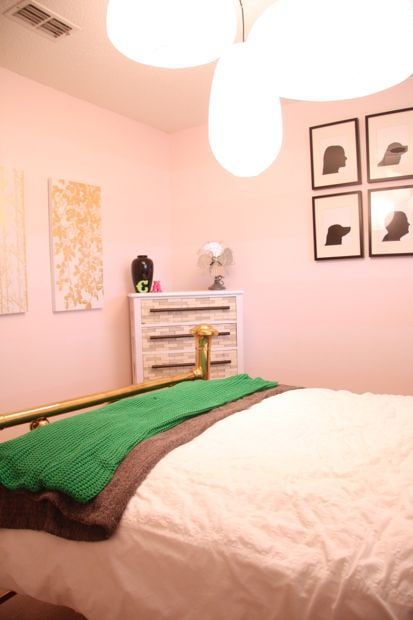 It fits perfectly into our guest room and I love how it goes with everything else (though, it’s pretty clear I need to learn how to take better photos of this pink room!). Once again, the styling is very lacking, but we’ll get there. I have quite a bit of work to do in this room – as you can see, I switched around the furniture arrangement from the last time you saw it, but I haven’t changed the art yet, so it all looks a bit funny.

I have plans for it, though, so be on the lookout for an update to this room soon!

Our third project was shot in our garage. Remember this one? 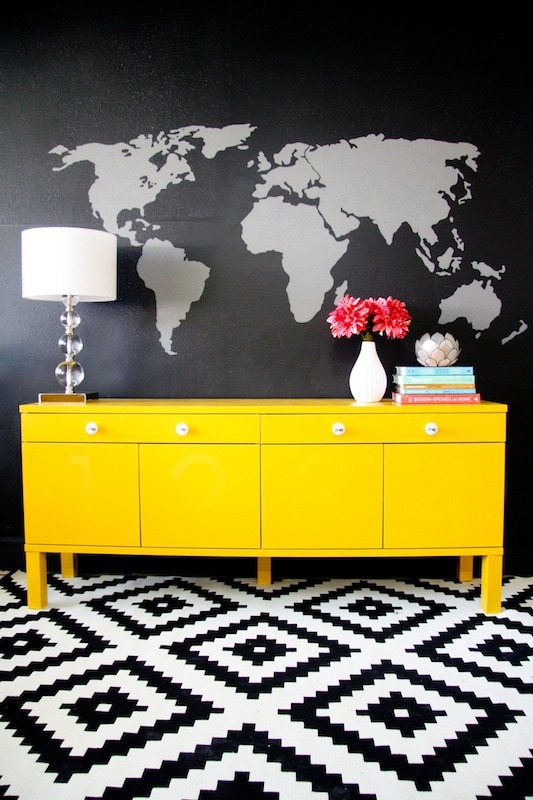 I’ve mentioned before that Corey and I have plans to turn our garage into an extra living space, and this is a bit of a preview of what it’ll look like. Of course, we haven’t actually begun the process yet (hopefully within the next couple of months!) so it’s looking kind of…crazy right now. 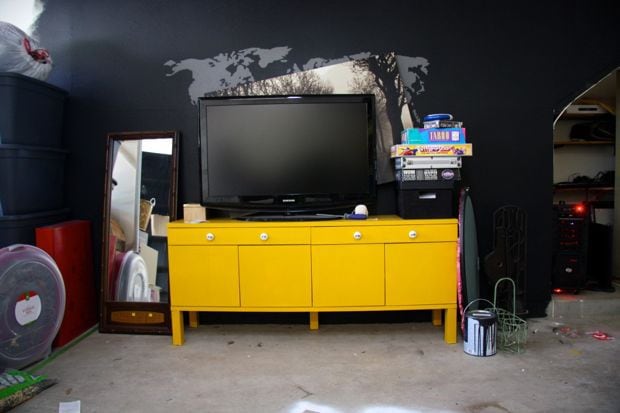 Yeeeah definitely a disappointment compared to the original, right? This room is in a transition phase as we start prepping it for the big renovation, so it isn’t cute right now. But, I have high hopes that as we get started on actually converting the room, we’ll be able to live up to the awesomeness of our competition project.

And finally, week four. The big one. 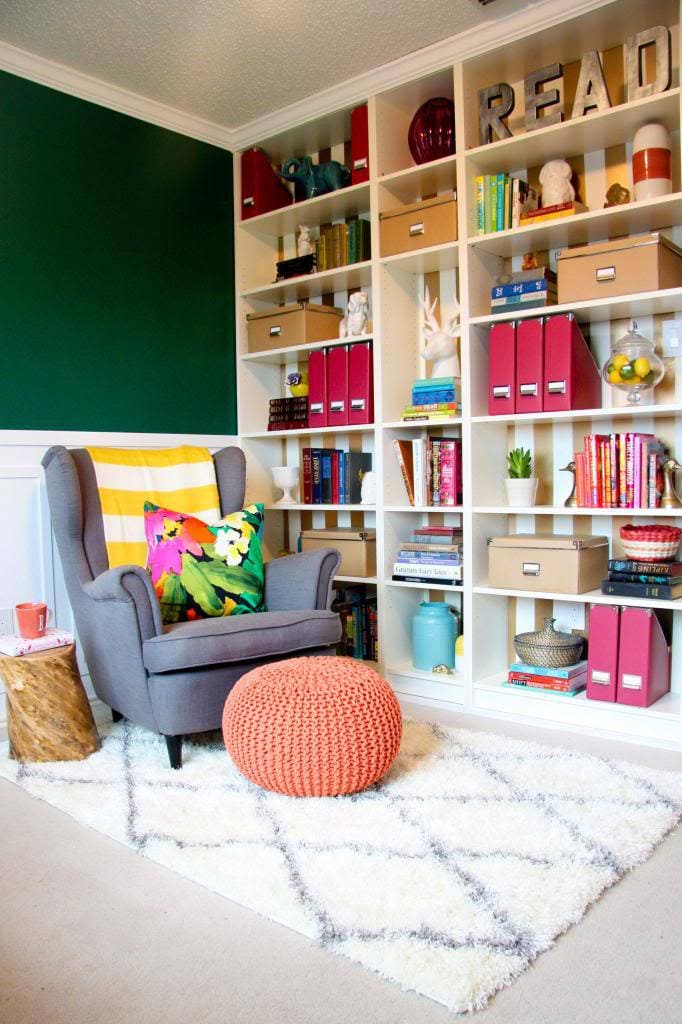 This room looks mostly the same as it did during the competition, except the bookcases have been re-arranged and our elliptical and dog kennels have been added back in. It’s a bit, um, crowded. 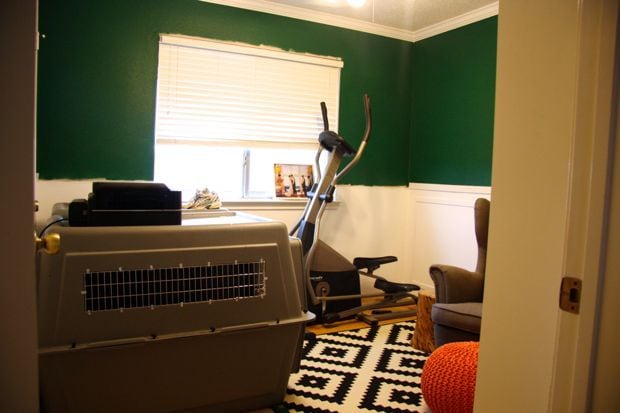 Once we get the garage done, the dog kennels and elliptical will be moving down there, so hopefully in a very short time this room will be looking quite a bit better. The rug we used in the competition photograph was actually my sister’s (as were many of the accessories from the other weeks), so once it was all over we brought up the rug from week three and put it in here.

I love how it looks, and I’m pretty obsessed with this room. It’s the perfect place to relax and read, and we’ve gotten quite a bit of use out of it already.

As you can see, we haven’t quite finished all of the trim yet – we didn’t need to complete the whole room for the competition, so we figured we’d save ourselves a bit of stress and do the rest later. We plan to trim out the entire window at some point soon, and then obviously finish all of the picture molding around the bottom. It’ll probably happen once the garage is all finished and we have a little room to actually work in here again.

And with that, you’ve officially seen all of our projects in their natural habitats. Not quite as stylish and photo-worthy as they were for the competition, but that’s real life, isn’t it? We’re head over heels in love with all of the projects we did, and I think it was a really awesome way for us to push ourselves and see exactly how creative we could get. I’ll admit, there were a few times where we thought we weren’t going to manage to come up with a good idea, but we always managed to pull through and come up with something we were proud of – I love that we got the chance to see how much we could really do!

Does anything in your house look different in real-life than you make it look for photos? Anyone else have some crazy looking in-transition rooms in their house right now?