You guys. I have bad news for you today.

If you follow along on our Facebook page, you may already know this. It’s a long, winding, horrible story but I’ll go ahead and ruin the ending: we have to get convert our media room back into a garage. Oh, and spoiler alert: you’re going to think we’re big dummies. And we deserve it. Because we kind of are.

If you don’t know what I’m talking about, a few years back we partially converted our garage into a media room and a couple of months ago we gave it a fresh update to make it even more awesome. It’s been a really awesome place to hang out and watch movies ever since. But now, it’s gone. It used to look like this… 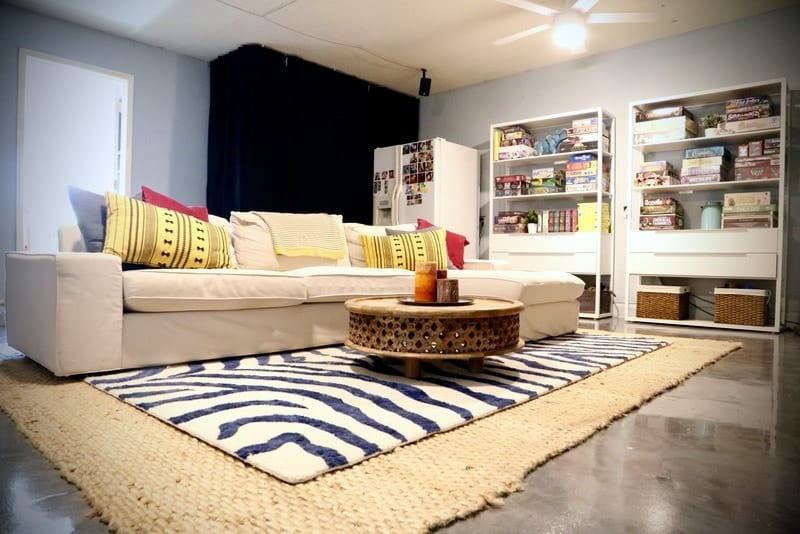 But at the moment, it’s looking more like this (get your pinning fingers ready, because I just know you’ll want to save this): 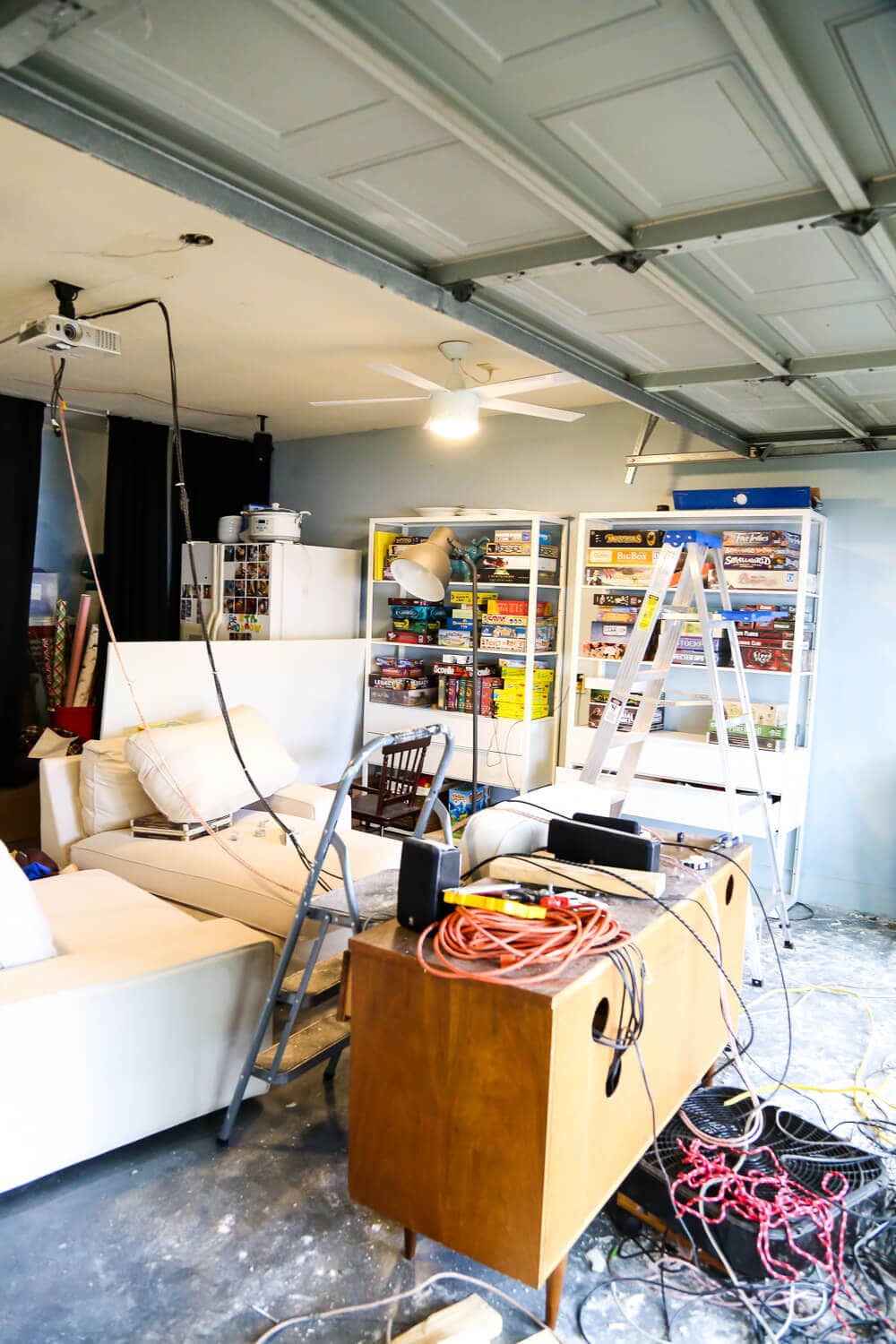 So, what happened? Well, before I can dive into the full story I need to set you up with some facts:

Why We’re Converting Our Media Room Back Into a Garage

We renovated our garage without getting a permit. We were doing the whole thing ourselves (aside from adding electrical to the wall we built, which we had a licensed electrician do because we aren’t that dumb), had no intention of selling the house with the wall still intact, and figured it’s our home and we can do whatever we dang well please.

It honestly never crossed our minds that we might need a permit to build a wall in our garage.

But apparently, we do. Or, at least, we need to apply for one so they can tell us we aren’t allowed to build a wall in our garage at all.

One day a city official was in our neighborhood handing out citations for weeds in yards (seriously, do these people have nothing better to do with their time?) and she noticed that our garage door was vented (because we had a small AC unit in the wall we built) and she got nosy. She figured out that we had a wall built and left a note on our door.

After talking with her, we learned that our city has an ordinance that each home must have two covered parking spaces aside from the driveway. Why? I don’t know. Because they can.

So, after going back and forth with her for a while, we realized that aside from building a carport in the middle of our front yard, we didn’t have a choice. The garage was a no-go. She said our only possible option would be to write a letter to the city basically begging them to let us break the rules. It didn’t matter to her that several other people in our neighborhood have done it, it didn’t matter that we don’t use our garage as covered parking anyways, and it didn’t matter that we don’t want the dang covered parking. She wasn’t budging.

We wrote the letter, made it extra sappy, and crossed our fingers. It took a couple of months for them to get back from us, but they finally did. And they denied it. No garage media room for us. The lady would be coming back in a couple of weeks to re-inspect and make sure we had complied with the rules.

Now, we know technically we have options here. Our friends kept telling us to rip the wall down, have her inspect it, and then re-build it but be sure not to vent the garage door again so we won’t get caught. We had people suggest using curtains instead or re-arranging the room so that we could still use it even without the wall. But for Corey and I, it was over. We didn’t want the room to feel like a garage, and with anything but a wall, it would. And we aren’t rule-breakers, so we weren’t about to risk spending all the time and money to re-build the wall and then getting caught again.

So, the room is going back to being a garage.

But! Since we are so used to having this room act as a fully-functioning extension of our home, we aren’t just going to have any old garage. It’s going to be a pretty, organized, and totally useful garage. I’d be lying if I said I wasn’t excited about getting some storage space back and having an entire room dedicated to things like small projects, storing my off-season decor, and keeping all the junk that doesn’t fit in our house. It’ll also be great for the workshop since we currently store a lot of that sort of thing in here.

Basically, we’re looking on the bright side, and we’re determined that this is gonna be a good thing in the end.

So, here’s where we are at as of right now: 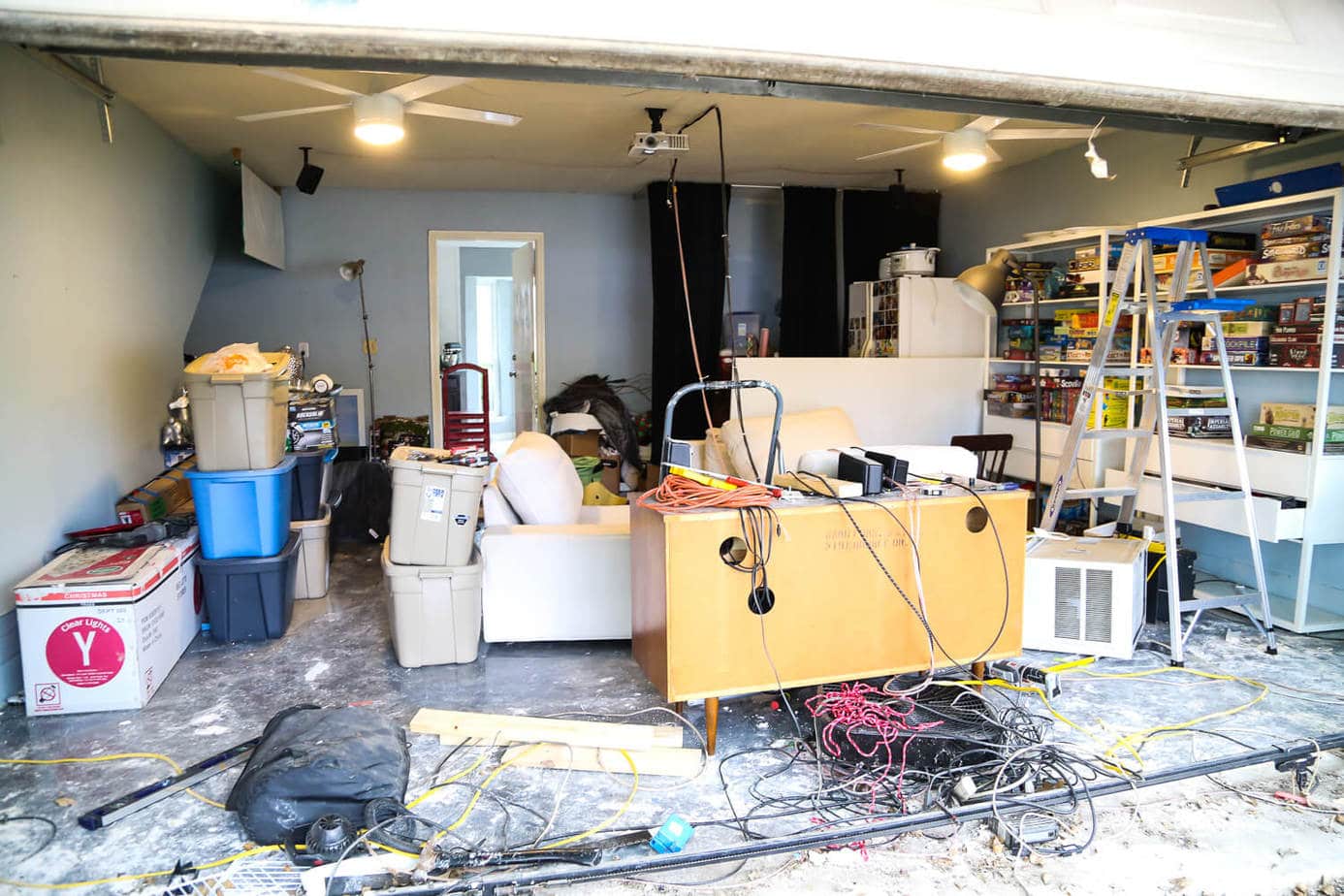 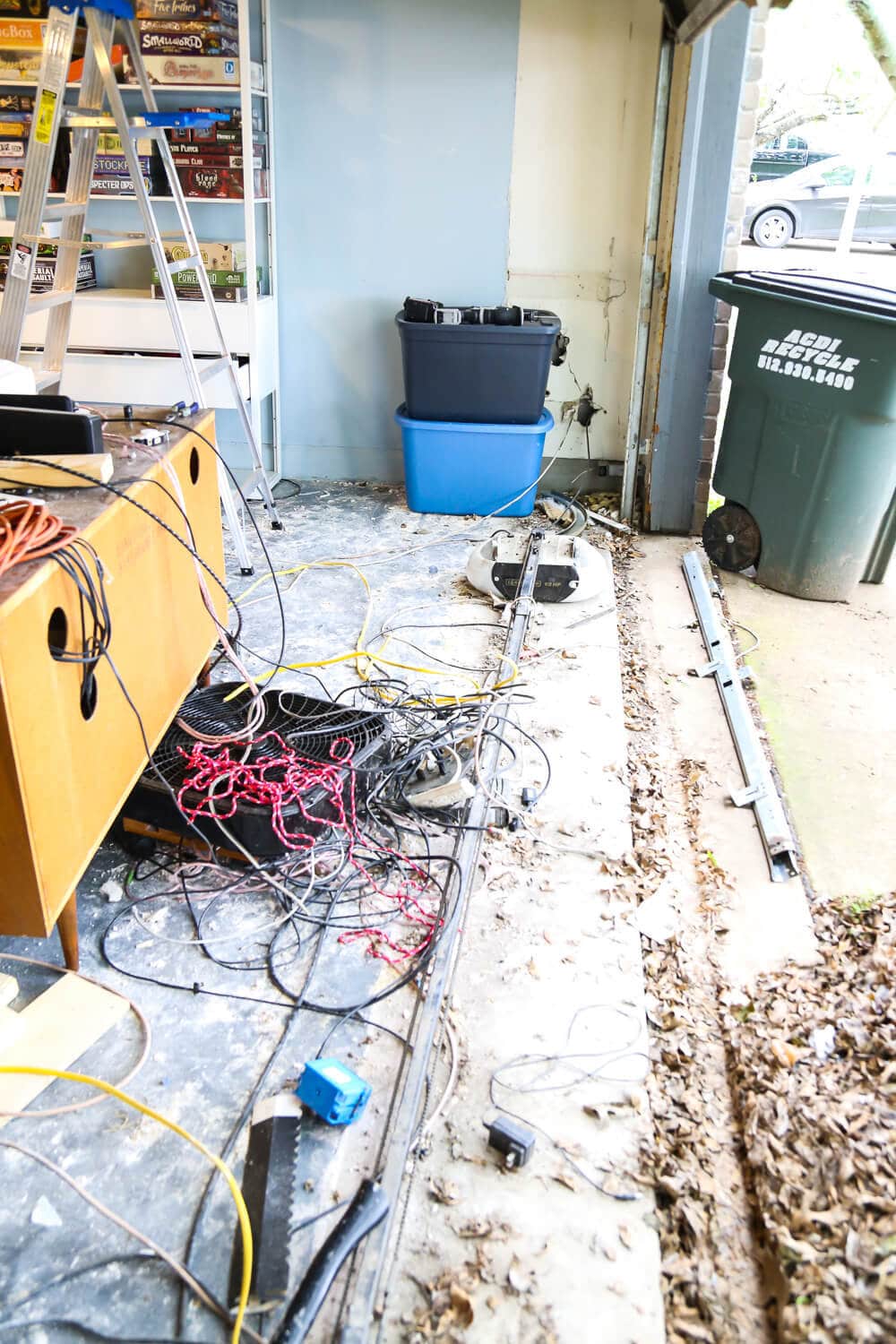 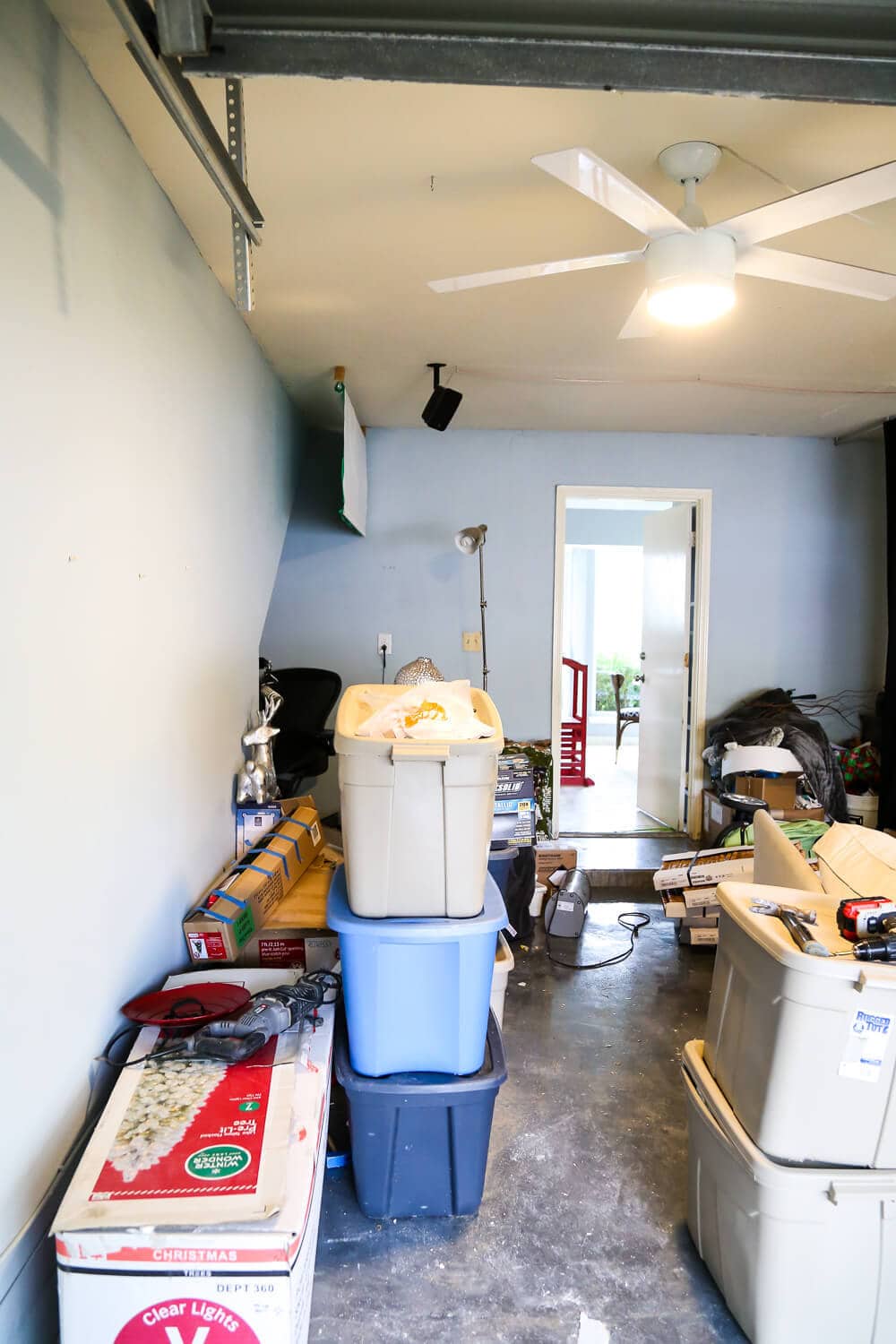 The wall has come down and we’ve repaired the tracks on the garage door so that it functions again. We’ve already got the stuff to make the flooring match the rest of the room, and I plan on finishing painting the walls this weekend (as long as I can track down the paint we used…). We’ve sold most of the major stuff that was in here, but we’re still crossing our fingers that the couch sells soon so we can get it out of here.

The room is desperately in need of some serious organization. We’ve got some plans for how we’re going to get that done, along with a few ideas for how to make the room as pretty as possible without sacrificing functionality. We’re really sad to lose this as a room to hang out in, but it’s really going to be nice to have this storage space back when all is said and done. 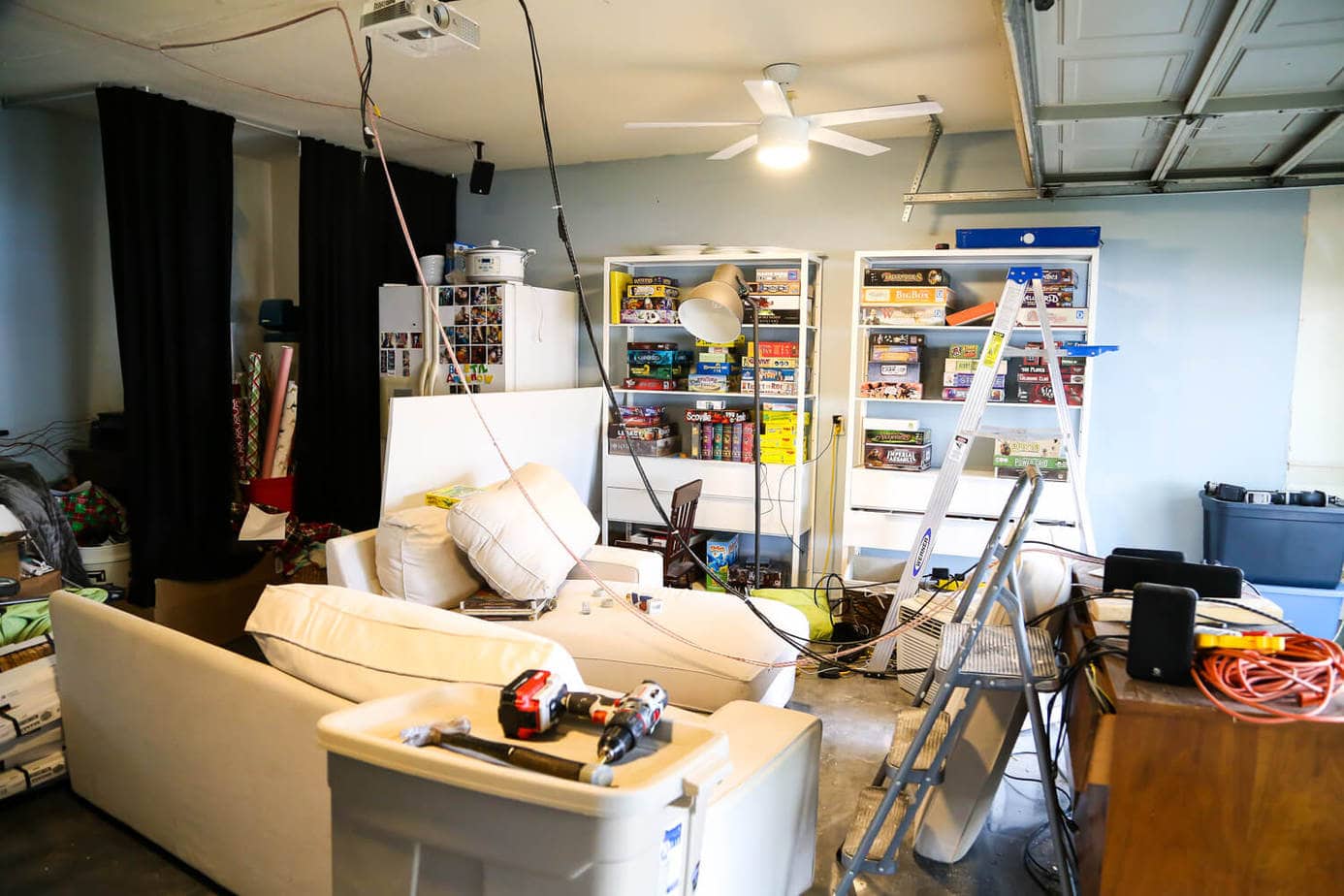 Moral of the story? Get a dang permit.