Most years right around this time, I like to do what I call the February Organize-A-Thon (see 2013 here and 2012 here). It’s a very effective way to get the house back in order for the new year, and I always have a lot of fun with it.

But, um this year there’s a new addition in our home that puts organizing a lot lower on my priority list. But I can’t let the entire month go by and not even MENTION organizing, because I like traditions and hate to break one. So today, we’ll be chatting about the organization in the nursery. It’s a tiny, tiny room so it was quite a challenge figuring out where to put everything – but I think we did a pretty good job getting it all arranged! It’s too soon to tell if this set-up will really work for us, but it’s a good start if nothing else.

Let’s start in the closet. 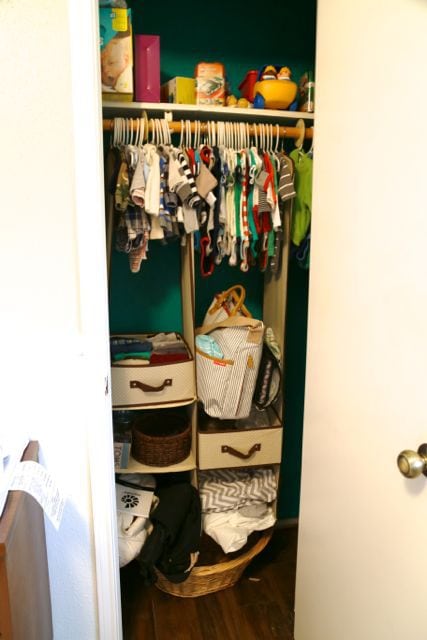 We’ll work from top to bottom….

The shelf at the top of the closet is currently a bit of a dumping ground for things we don’t need yet. We have an extra stash of diapers (the next size up from what we are currently using) as well as a few random toys and toy containers that we aren’t using yet. It’s not particularly organized at this point, but it keeps this stuff out of the way, so I’m happy.

Then, of course, we have tons of adorable baby clothes. Love. I have some clothing size separators that came with our closet organizing kit (more on that in a second), so that’s what I’m currently using to keep the sizes apart. I haven’t figured out what will work best for us long term in terms of storing clothes (do we keep them all in here? Just the ones he currently fits into? Where will we put them when he outgrows them?) but for now we have everything in here and are going to play it by ear. I’m sure I’ll come up with some sort of a system eventually.

Now we’ve got the heart of the organization in here. We got this closet organizing set from Target (it’s not sold online, but it’s found in their baby section and it’s the most awesome thing ever) and it came with this hanging system, those cloth boxes you see, some velvet hangers, and the clothing size separators. It’s not the prettiest set-up ever but it’s totally functional and I love it. We had originally planned on building some shelving into the closet, but in the end this was much cheaper, and it was temporary which is a perk – the little Monster’s needs are going to be ever-evolving as he gets older, so it seems silly to put something permanent in now.

We’ve also got a little bit of room on either side of the hanging organizer – for now, we have extra shelves for the bookcases on one side and his play mat on the other side. As with everything else, I’m sure this will all evolve as his needs change!

Next up we have the bookcases. 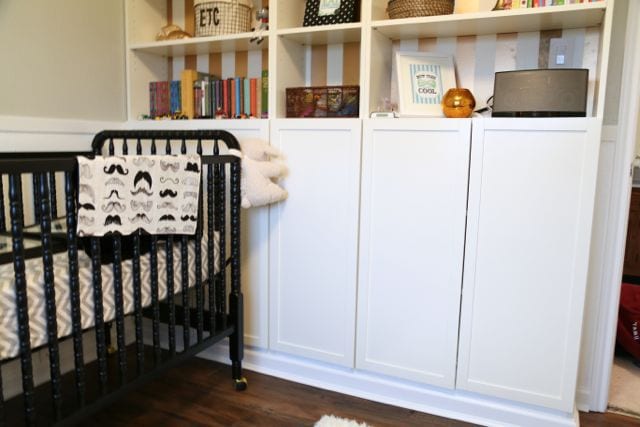 We have quite a bit of covered storage in these guys, which is awesome, but I have to be at least slightly careful about what we store in here because it won’t be too long before he’s able to get into the doors. This is still a work in progress and we’ll probably not land on an official organization system for this part of the room until we actually use it for a few months, but we have a solid start!

We have a bit of stuff hidden in the open part of the shelving – those three brown boxes you see at the top are a perfect storage place for some of his larger clothes (like pants and pajamas he doesn’t fit into yet) – one box is for clothes up to 9 months, and the other is for 9 months and up. Neither of them are very full yet, but we have them ready to slowly fill up over the next months! The third box is a memory box with things like cards from the baby shower and letters Corey and I wrote to him in the weeks before he was born. I can’t wait to watch that box fill up! 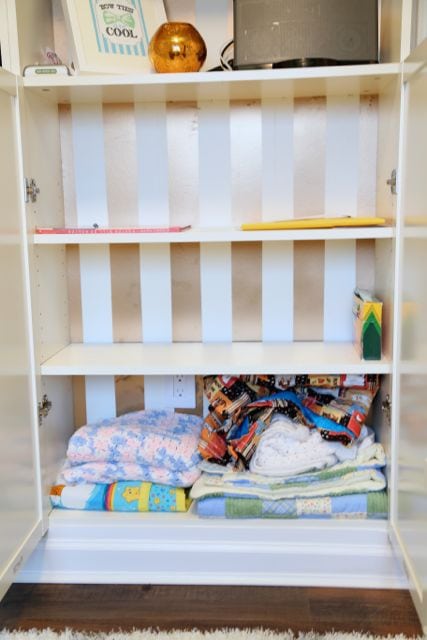 This is the far right section of our bookcases. Not much in here for now – the top two shelves are pretty much empty, and the bottom one has been designated as the place we keep all of the hand-made blankets he has. I’m shocked at how many we were given, and I think these will all be special to him! I love that we have some room to grow here – I’m sure this will end up being a place we store toys and things we don’t mind him getting into, as it’s the most easily-accessed section of the bookcases. 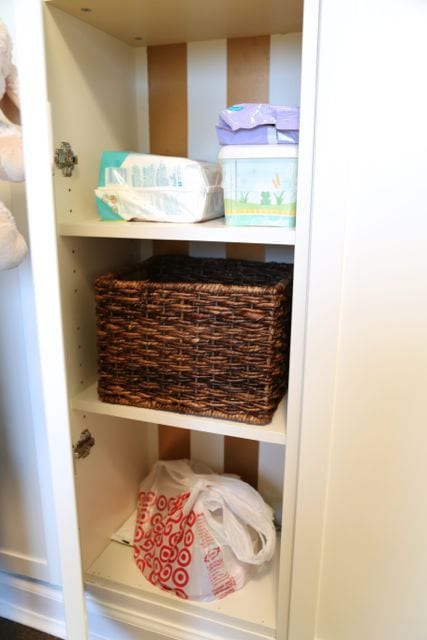 This is the middle section, and I’m not in love with how it’s “organized” but I’m waiting to do much to it until I really know how we’ll use it. For now, the top shelf has extra wipes, the middle has a basket with extra hangers for the closet, and the bottom is a bag with lots of extra little toiletries and hygiene products for when we run out of what’s in the changing table. I doubt this will stay like this forever, because I’m sure we’ll need these shelves for other things as we accumulate more baby crap, but it’s a start! 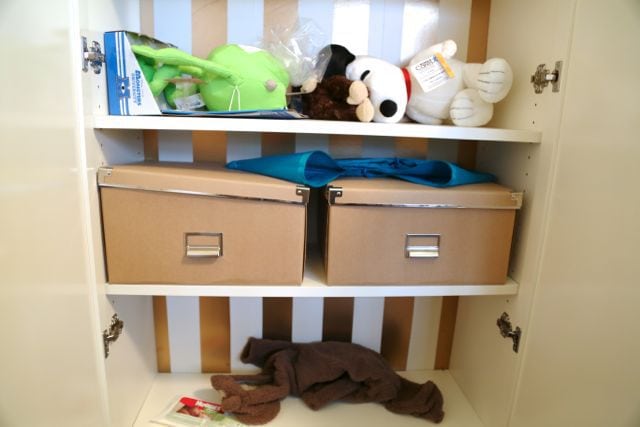 And here we have the last section of the bookcases, the one that sits behind the crib. This is the one that’s the hardest to access and will be used mostly for stuff he doesn’t need yet or that we don’t need to use very often. For now, we’ve got some random stuffed animals on the top shelf (though I’ll probably end up moving those over to the side with the blankets, so he can play with them once he’s a little older). On the middle shelf are two boxes with diapers – they’re size 2 diapers that were made into a diaper cake for one of my showers, and I figure we won’t need them for at least a couple of months (let’s hope), so they’ll stay here until he’s big enough for them. And the bottom shelf just has a couple of random things that should probably find a different home – basically, more room to grow!

And that, my friends, is how the nursery is organized (for now). I spent a lot of time throughout my pregnancy thinking of what the best ways to keep everything organized would be, but I’m sure a lot of this will go out the window as we adjust to this crazy new life. If nothing else, I feel like this is a good start and at least Corey and I know where everything is and we can live with it like this for a while until we figure out what really works for us!

What have you been organizing in your home lately? Anyone willing to carry on the Organize-A-Thon tradition since I can’t this year?

Previous Post: « What to Pack in Your Hospital Bag
Next Post: Room Reveal: A Serene, Neutral Nursery »