Can we talk about my bathroom again? I know, between the big reveal a couple of months back, our spa-like update, and the jewelry organizer I shared last week you’re probably tired of seeing it.

But, I have one more quick update to share and then I’ll shut up about it. For now.

Anyways. We absolutely love our bathroom and I’ve said more than once that I could basically live in here if it was socially acceptable. But the one thing I didn’t love about it? The closet. You know the one – I think it’s some law of nature that everyone has one in their house. That closet that seems to emit horror movie music every time you open it and where all of your stuff goes to die? Yeah, this closet was that one for us.

(Okay, let’s be real. We have a few of those closets. But this was one of them.) 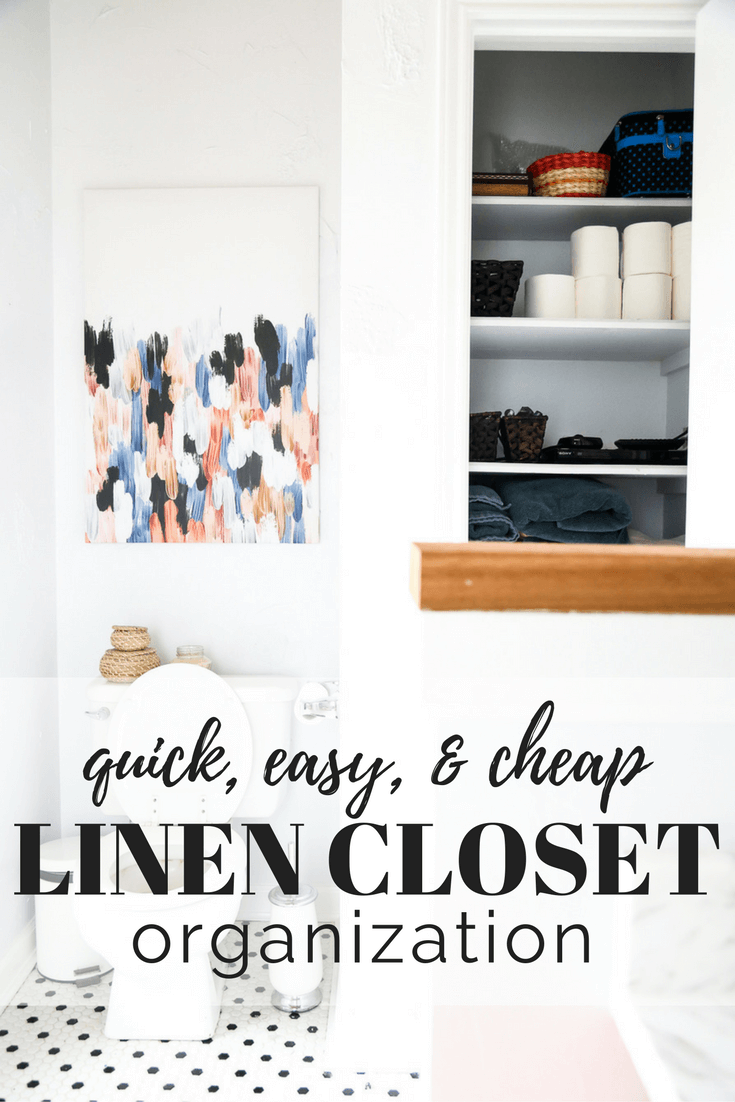 I’m almost embarrassed to share this as a project because it’s so easy it’s a little silly.

And this? This is the epitome of easy.

Let’s chat about how it looked before I got started, though. This linen closet has been a hot mess since we moved in. We’ve never really done anything with it, we’ve always just thrown things on the shelves. And after our bathroom renovation? Forget about it – I basically just kept the door closed as much as possible and pretended like it didn’t exist. 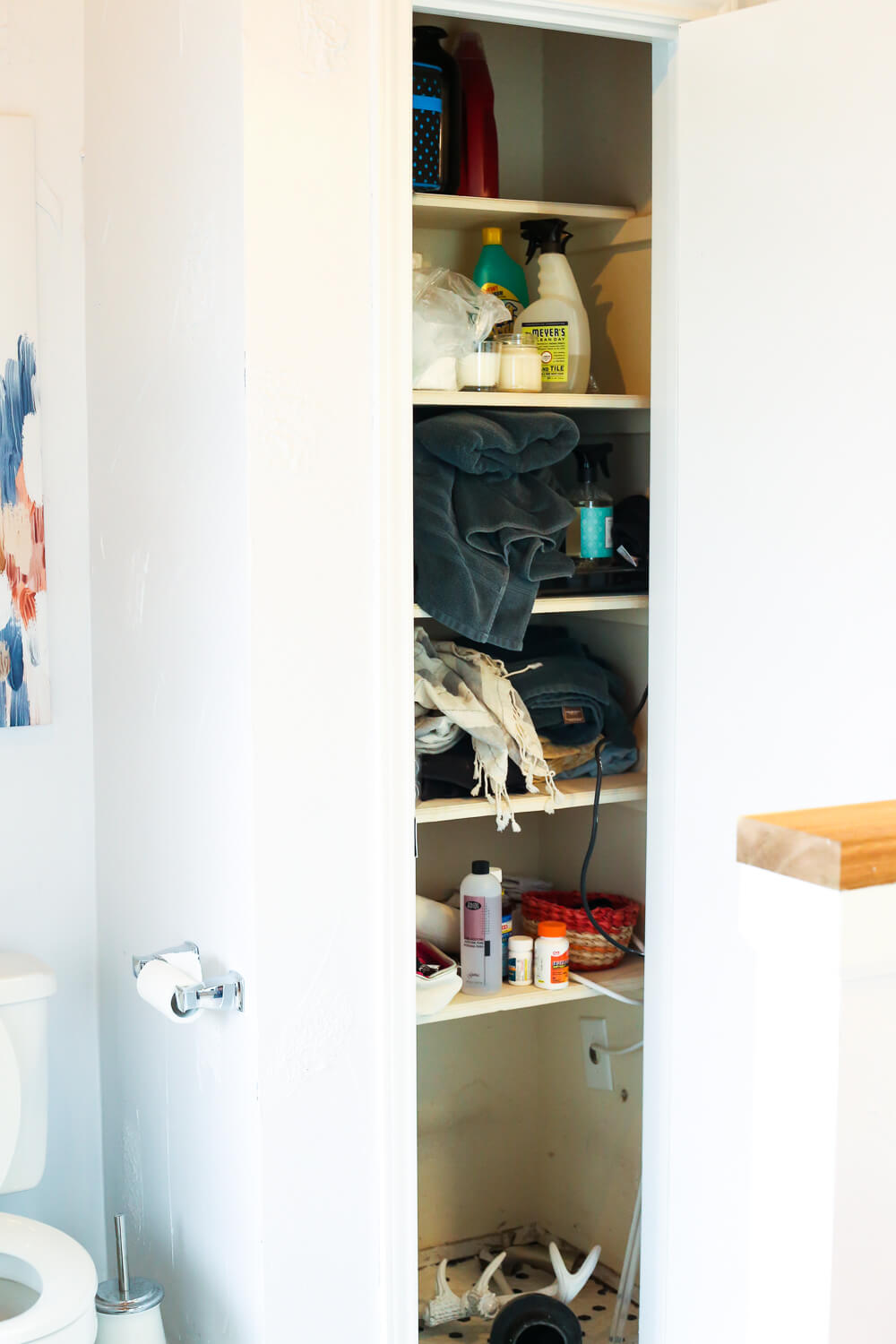 Seriously –  not functional. And can we talk about those dingy, dirty walls in there?

But, despite how awful it looked and despite the incredibly amount of time I spent avoiding doing anything about it, this was probably the simplest organization project I’ve ever taken on. On a whim one day, I decided to hit up the dollar store to see if they had anything that would work – I found these wood baskets for a total steal, grabbed a ton of them, and spent a whopping $25 to get this entire closet organized. 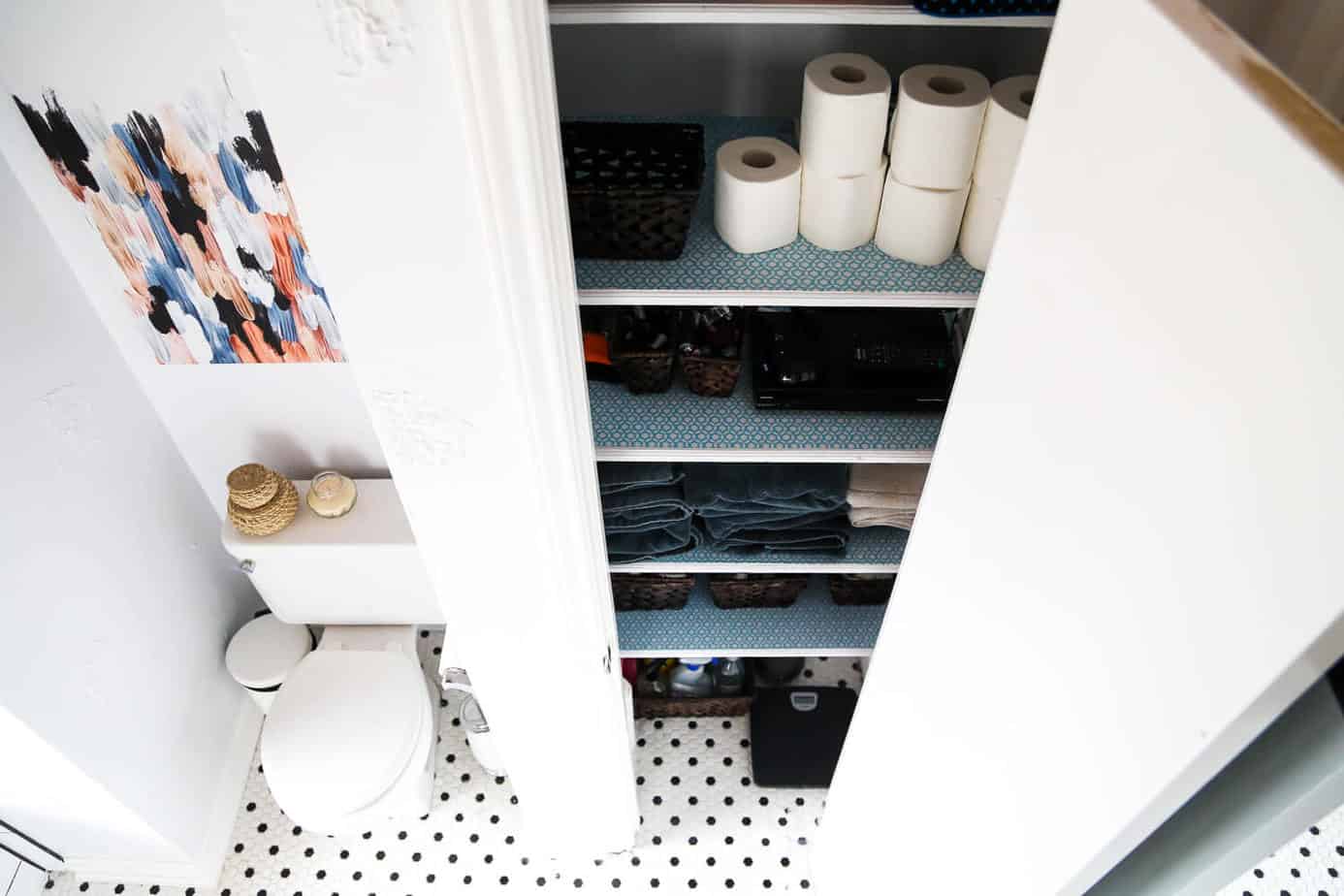 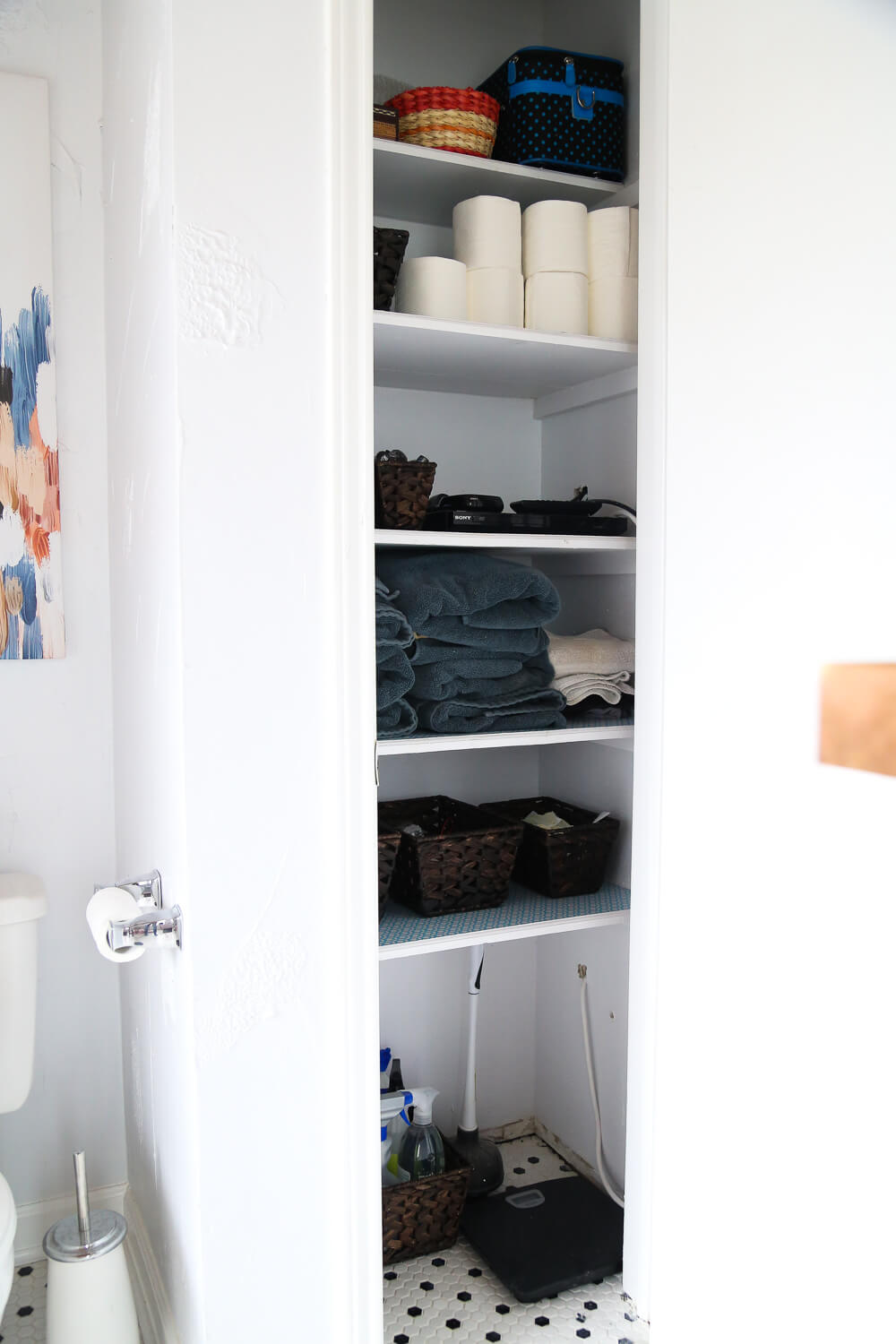 So basically what I’m saying is, baskets are the secret to getting your entire life organized. It sounds ridiculous, I know, but it’s kind of mind-blowing how much of a difference it made to just add some baskets, toss things in them, and actually fold the towels.

Because I’m not exaggerating when I say that’s all I did in terms of organization for this space.

What else did I do that made such a big difference? Well, for starters I painted the closet and the shelves. I was really tempted to skip that step because it seemed like a lot of extra work for a space we don’t look at all that often and that barely has any wall space anyways. But I had plenty of leftover paint from the bathroom renovation, so I figured I’d take the extra time. I’m so glad that I did – the closet feels so much cleaner it’s absurd, and it really feels like a part of the room now and not just this disjointed, awkward place to keep our towels.

Once the paint was dry, I also added some shelf liner to all of the shelves. Contact paper is seriously one of my favorite products in the entire world for making storage areas feel a bit more luxe. It instantly makes spaces feel cleaner and more organized, and it’s way prettier than a plain ol’ shelf too. I have a ton laying around my house thanks to my sister (she was going to throw a bunch out but offered it to me first, and I never turn down free stuff) and while I didn’t originally think it matched the rest of the bathroom, when you see it together with the art above the toilet it draws out the blues nicely and fits right in.

And even if it didn’t…who really cares? It looks better than before and that’s what matters to me. 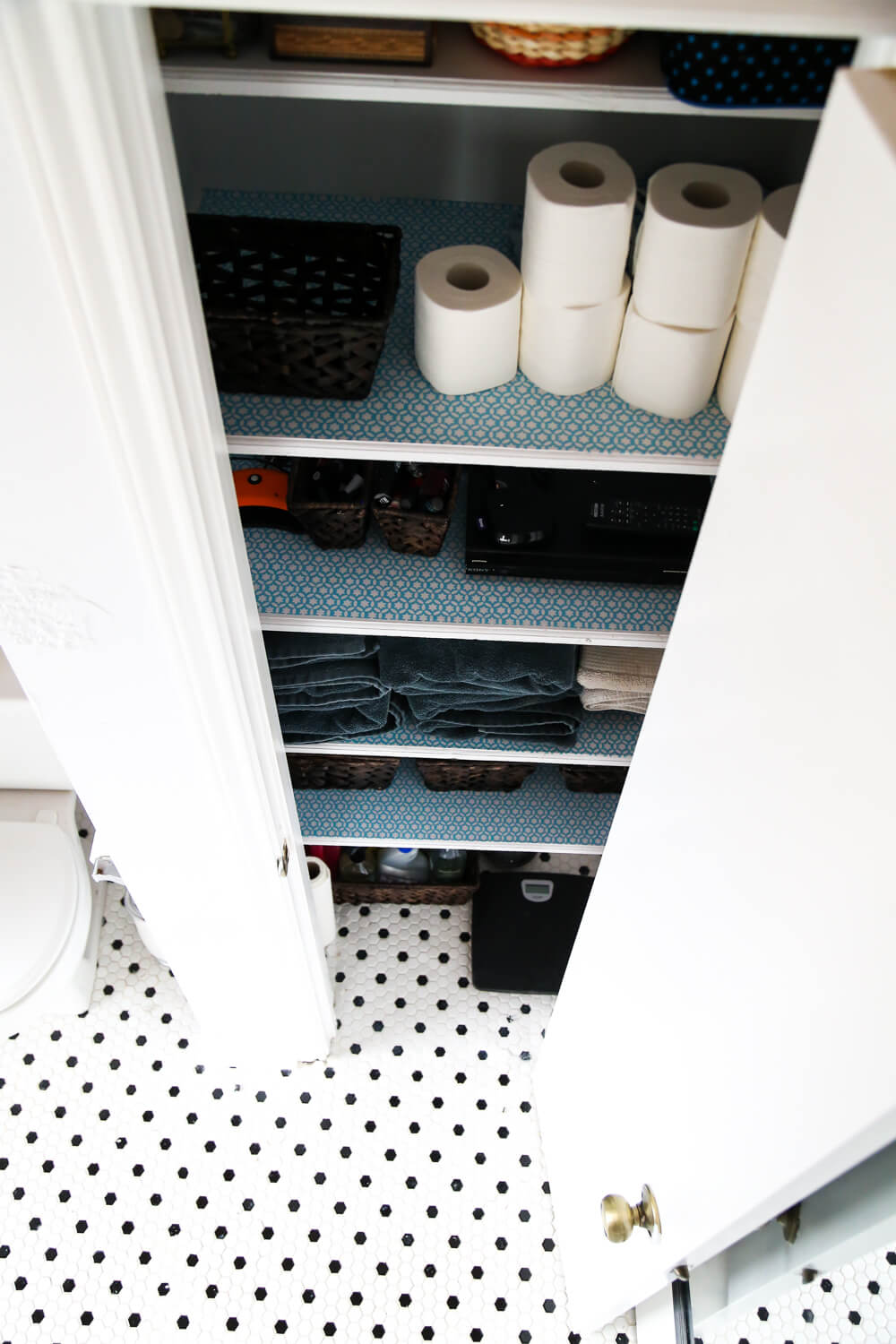 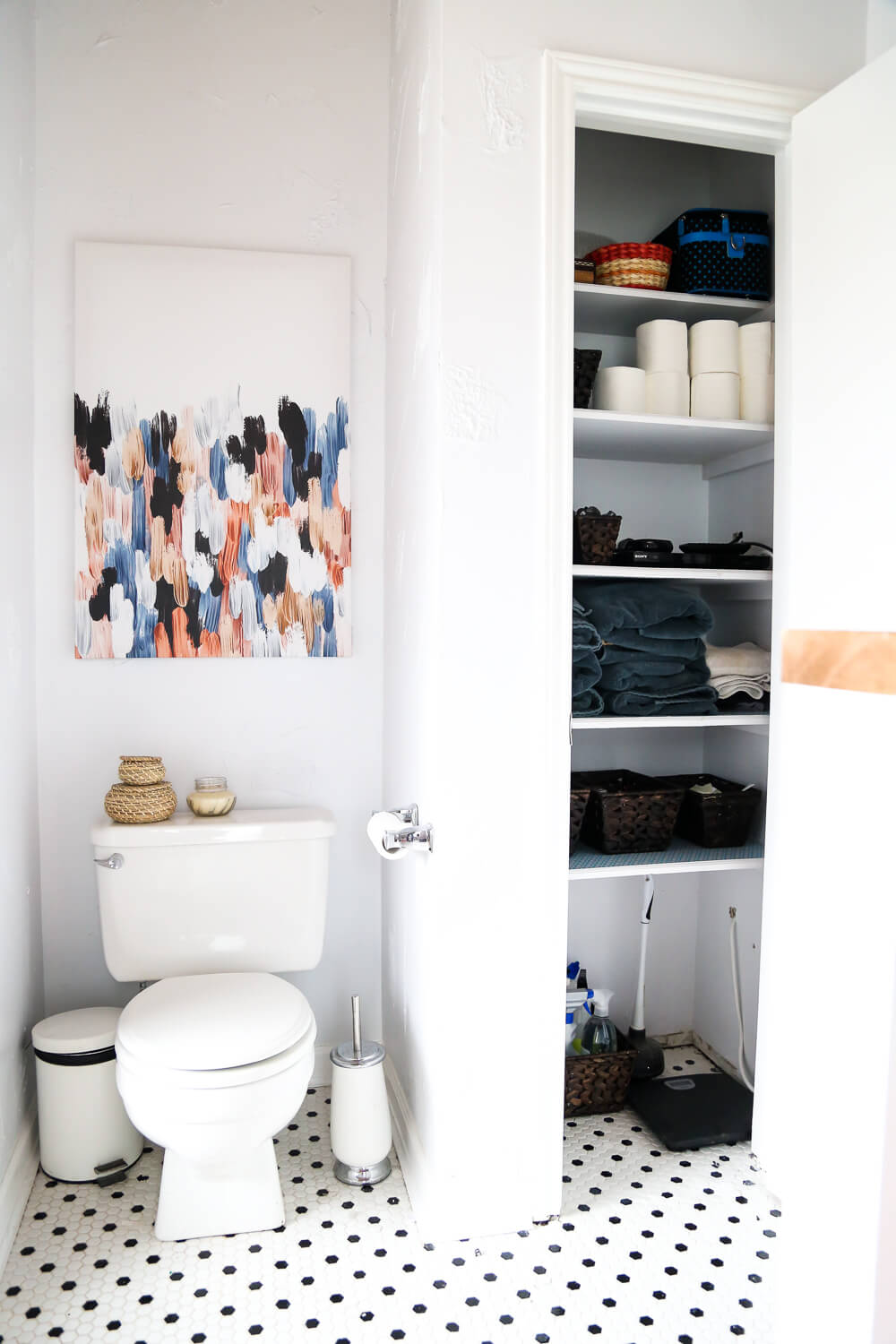 We still have a few tiny little finishing touches that we need to knock out in this bathroom. We haven’t installed the transition piece between the tile and the vinyl in our bedroom, and I’d still like to replace the mirror that hangs on the door for something a little less college-dorm-room and get a new trash can. But those are tiny little details I can live with. Especially now that my closet is this pretty and organized. I can’t even tell you how wonderful it is to be able to actually find the things I’m looking for!

Oh, and I know a few of you are curious about our Turkish towels, so I figured I’d do an update. If you don’t know what I’m talking about, a while back we had a discussion on my Facebook page about how Turkish towels are all the rage and I was curious if anyone had tried them. The general consensus was no, but everyone was curious. So I decided to be a guinea pig and buy a few for our bathroom when we were renovating it. They look gorgeous in photos if nothing else, and everyone seems to rave about ’em so I just had to try. I bought a few of these and, while I swear we gave them a fair shot…I’m not impressed. They’re super soft and really absorbent, which is awesome, but they just don’t feel like a bath towel to me! Maybe it’s just a personal preference, but I think one of the most wonderful feelings in the entire world is stepping out of a long shower and wrapping up in a giant, plush, clean towel. And these did not deliver that feeling. I think they’ll be absolutely perfect for beach towels or bringing to the pool, so we’re definitely keeping them, but they’ve been kicked out of the bathroom in favor of these beauties. Which, by the way, are very plush and cozy.

Just in case your local dollar store isn’t as awesome as mine happens to be and you can’t find any great baskets (or if you’re lazy and would rather order online, which is typically my preference), I’ve rounded up a few options below for affordable baskets that can help you get your linen closets organized. The key is to grab a few different sizes in a similar style, sort your stuff, and go to town. I promise, it’s revolutionary!