Have you ever heard of Round Top? It’s this tiny little down in central Texas (seriously, TINY. Like, population 90. Tiny.) where a major antique show is held twice a year. It’s become pretty famous among thrifters. Emily Henderson came (according to her blog she was there just a few days before us!), Chip & Joanna did a special little video about their trip a while back, and the Junk Gypsies of HGTV fame are located right there as well. 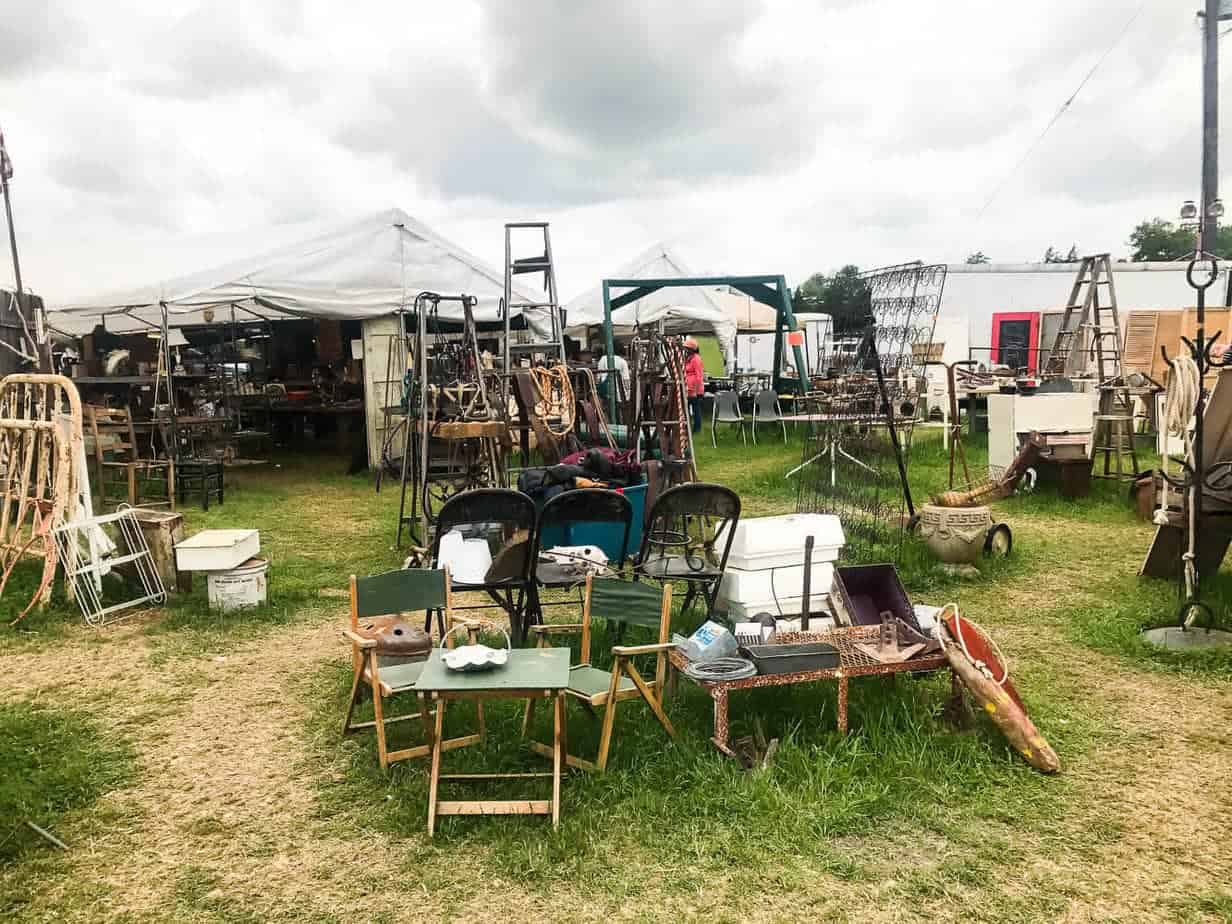 We’ve been once before and we loved every second of it, so we were really eager to go back. A couple of weeks ago, we loaded up and headed out there with my parents for a full day of shopping. I wanted to do a Facebook Live video while we were there (I’m just dipping my toes into them, and they’re so fun to do!), but there’s zero cell service there and I couldn’t get it to work, so I figured I’d just do a blog post instead.

The festival is pretty huge – it’s centered in Round Top but spills over into a few neighboring towns, and it’s basically several miles of a rural country road just stuffed to the brim with antique shops, booths, tents, and more antiques than you can possibly ever imagine in one place. Our favorite place to stop is actually in the neighboring town of Warrenton (it’s about 2 miles from Round Top) – they have a giant field full of literally hundreds of dealers. We like it because you can park your car in one spot and spend an entire day shopping without having to move locations at all – and you still won’t see everything. 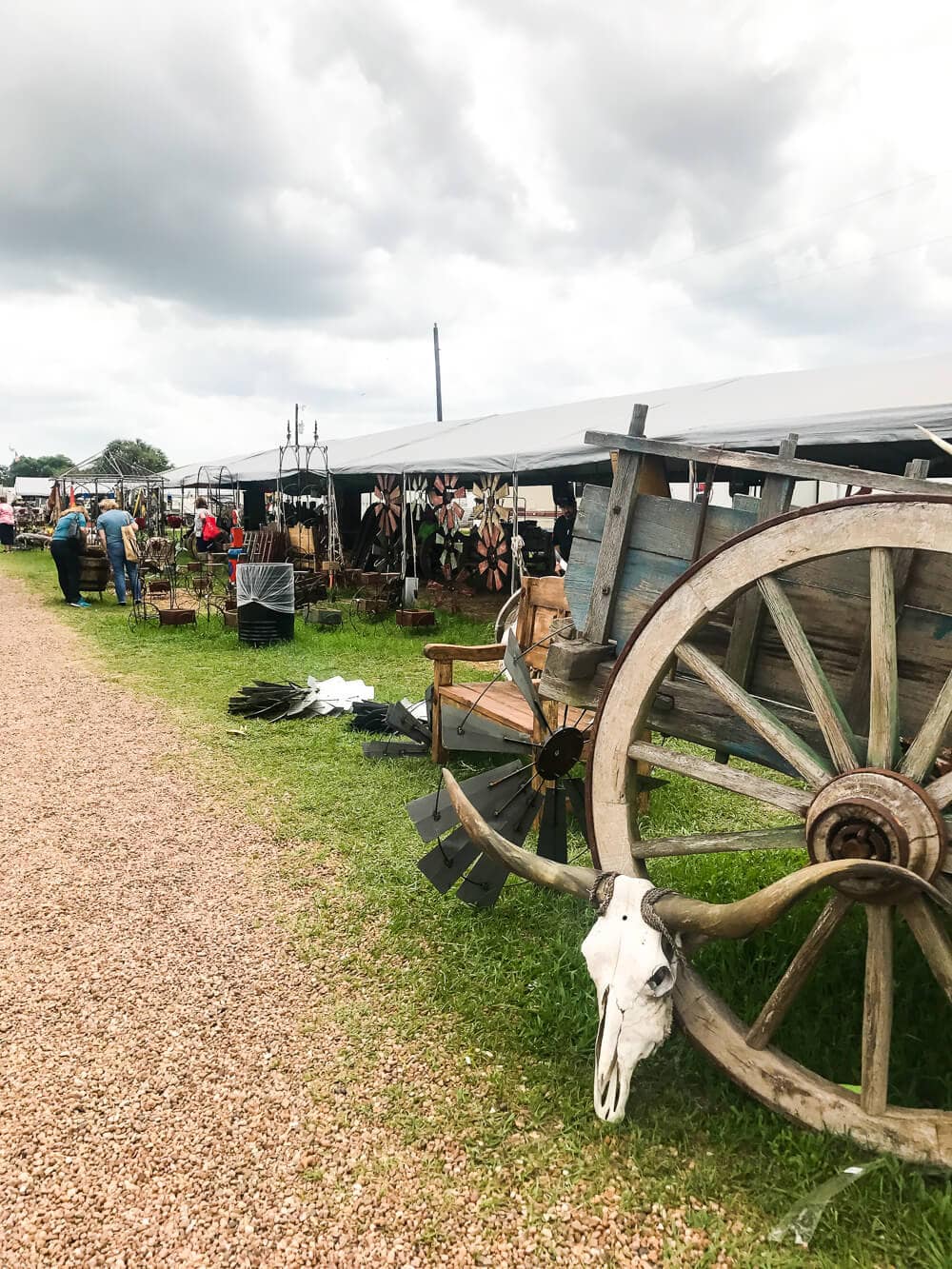 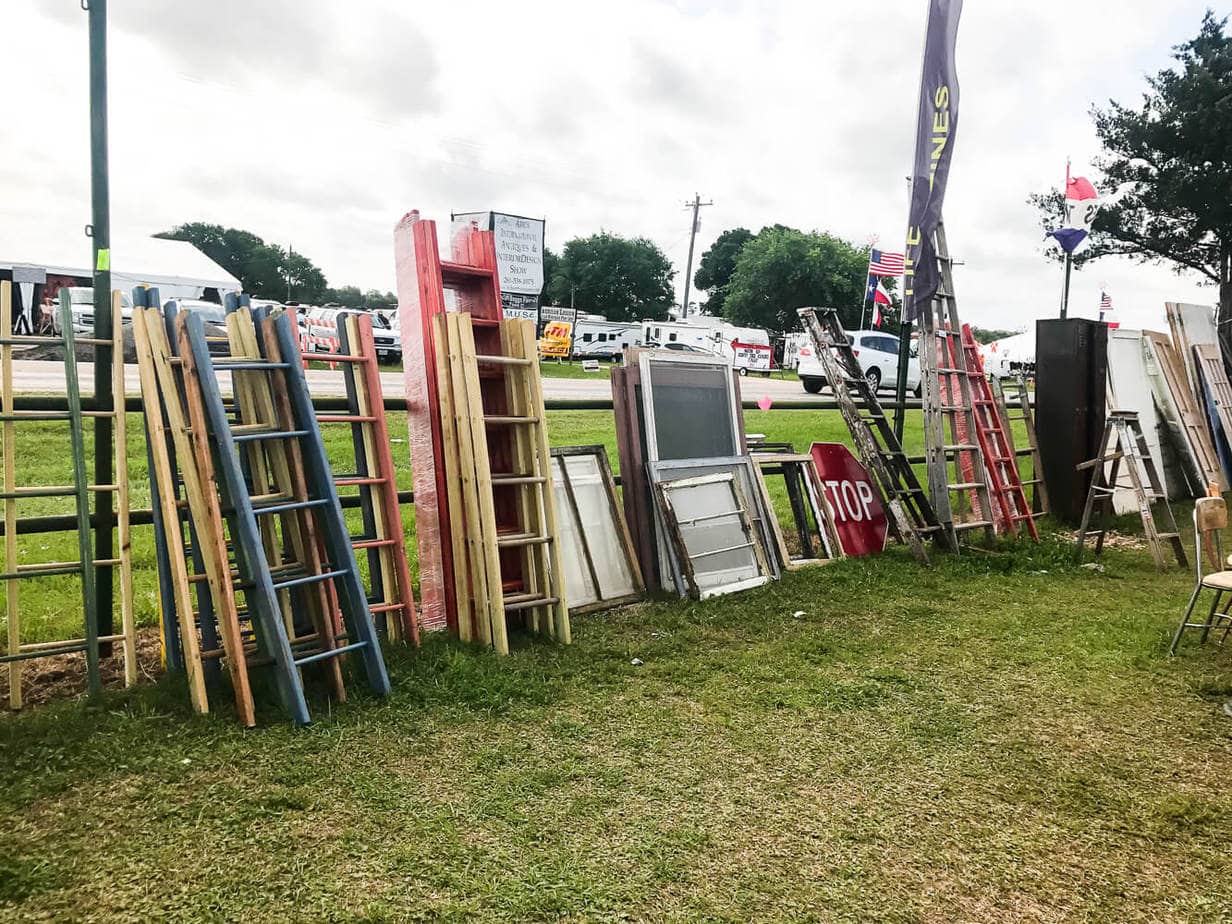 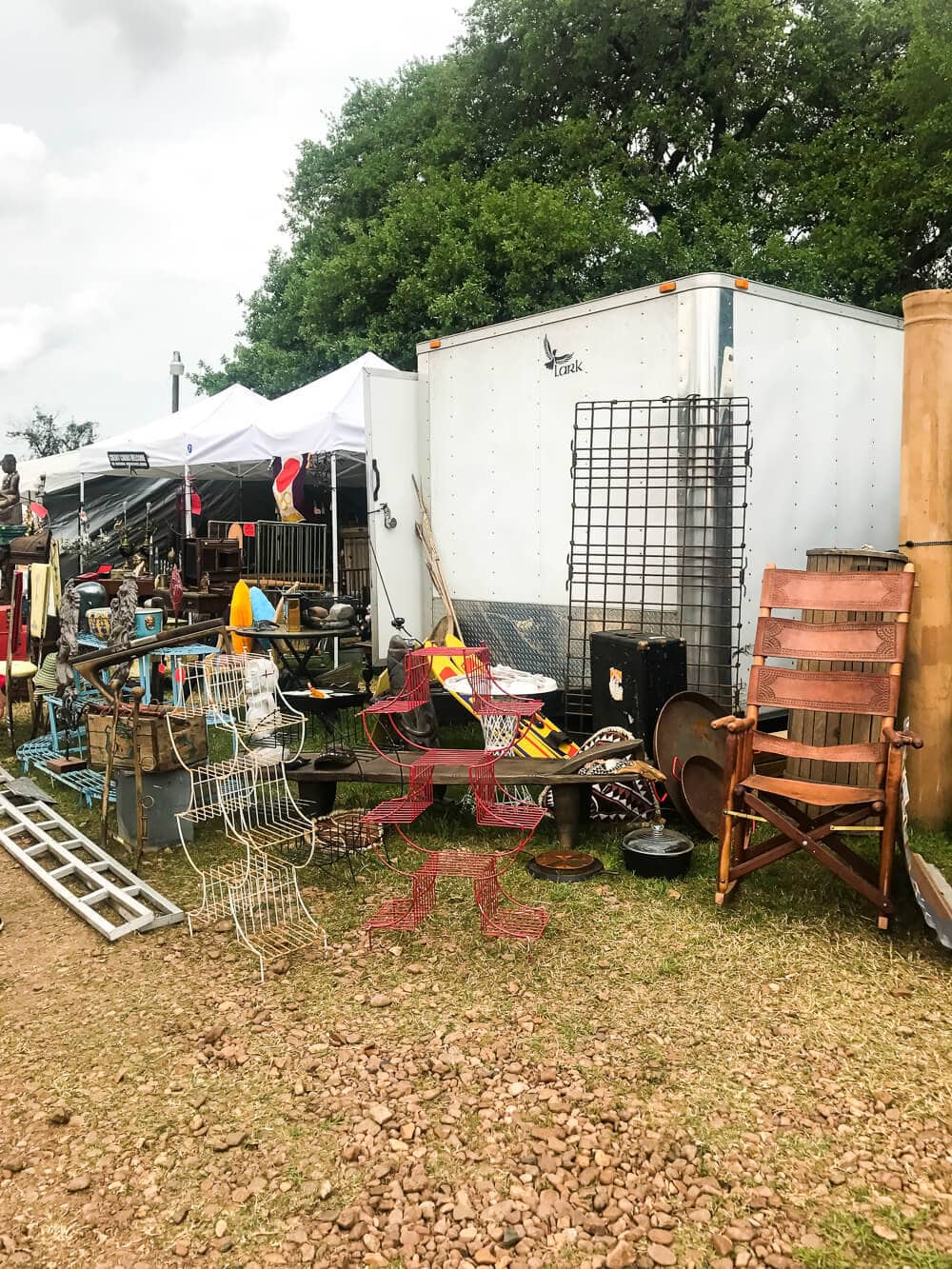 Another perk of this section is that there aren’t any permanent structures or full-time antique shops. The reason that’s so awesome is it means all the people manning the booths are looking to make a deal and you’re going to find a better price. The antique stores are there year-round and aren’t in a hurry to move their inventory…but the people in the booths have to pack up and take everything home at the end of the week, so if you go late in the festival like we did you’re likely to get a great deal because they just don’t want to haul it all home!

This is the section we shopped in a few years back, and I’d be lying if I said there wasn’t a small part of me that was hoping we’d stumble upon another antique table from A&M – we saw a few last time we were there and I still sincerely regret not buying one when we were there. But, of course, that was 6 years ago and those tables are long gone.

Moral of the story: don’t ever pass up on an antique with significant sentimental value. Even if it’s a bit of a financial stretch to purchase it. If you can buy it, buy it. Or else you’ll spend the next 6 years kicking yourself. 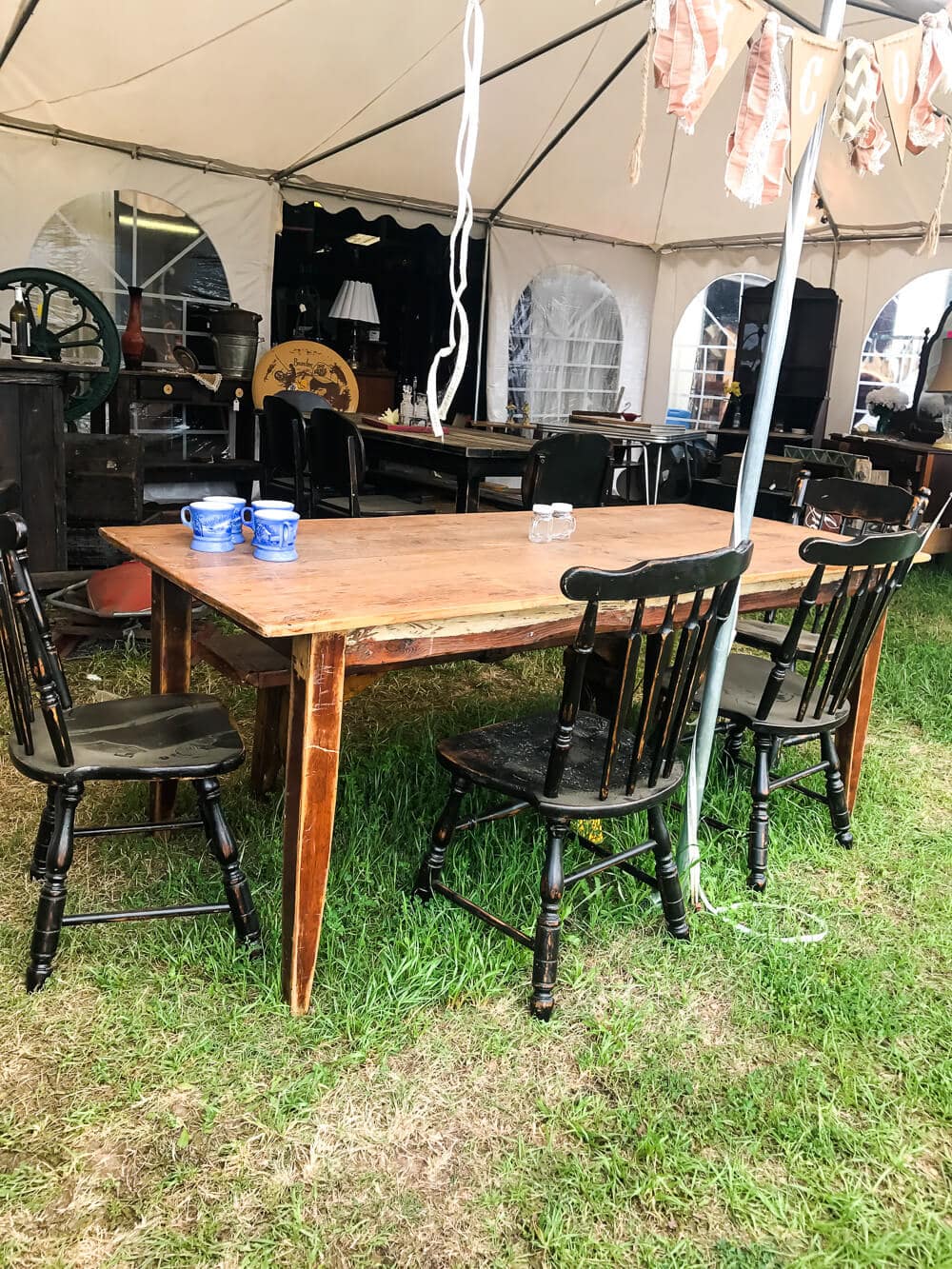 We might not have found the table, but we found a ton of other fun things. Card catalogs were all over the place (though the only one in my budget was already sold…of course!), along with tons of shelving, dressers, and tables that were so pretty I wanted to cry a little. 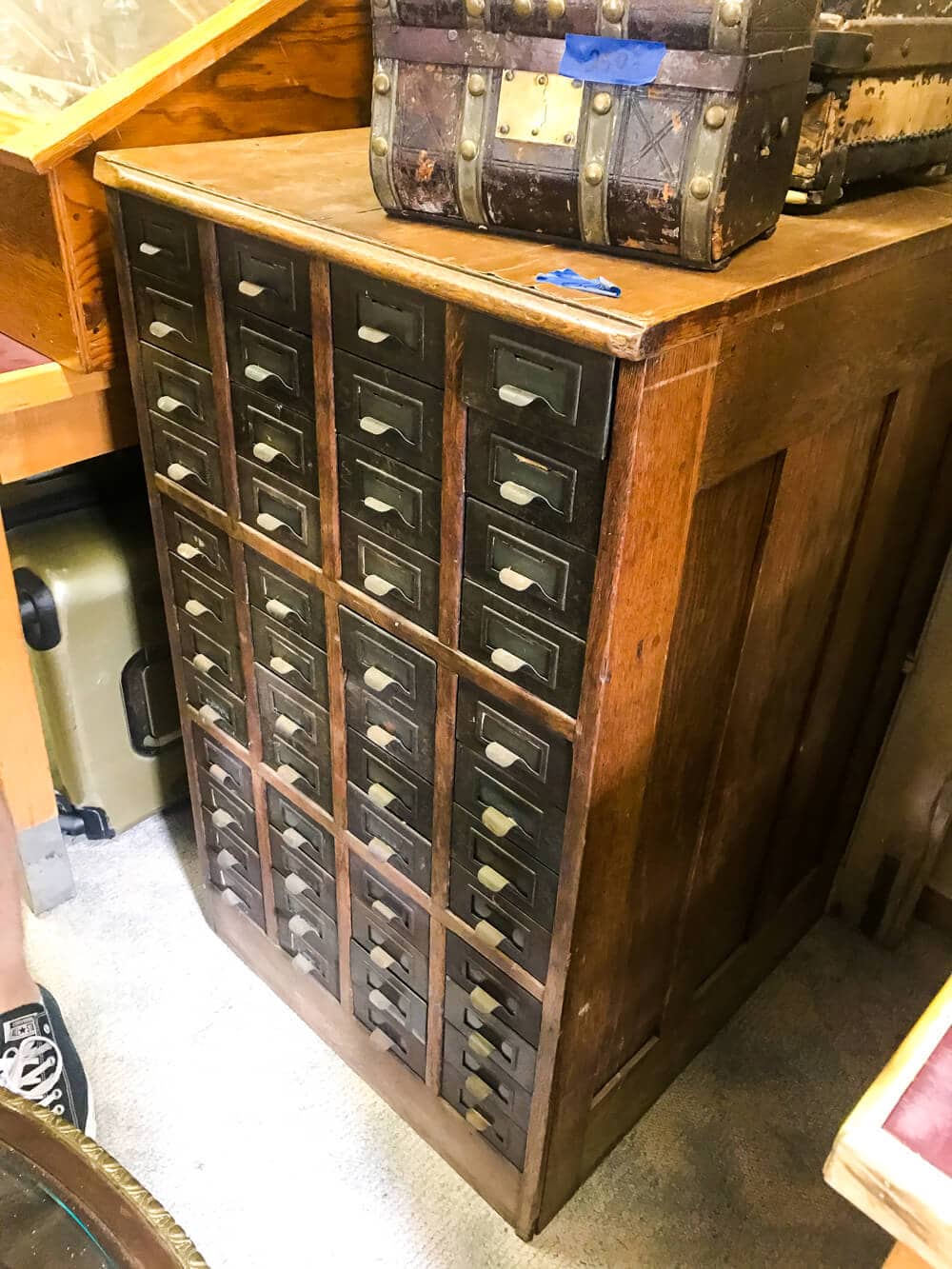 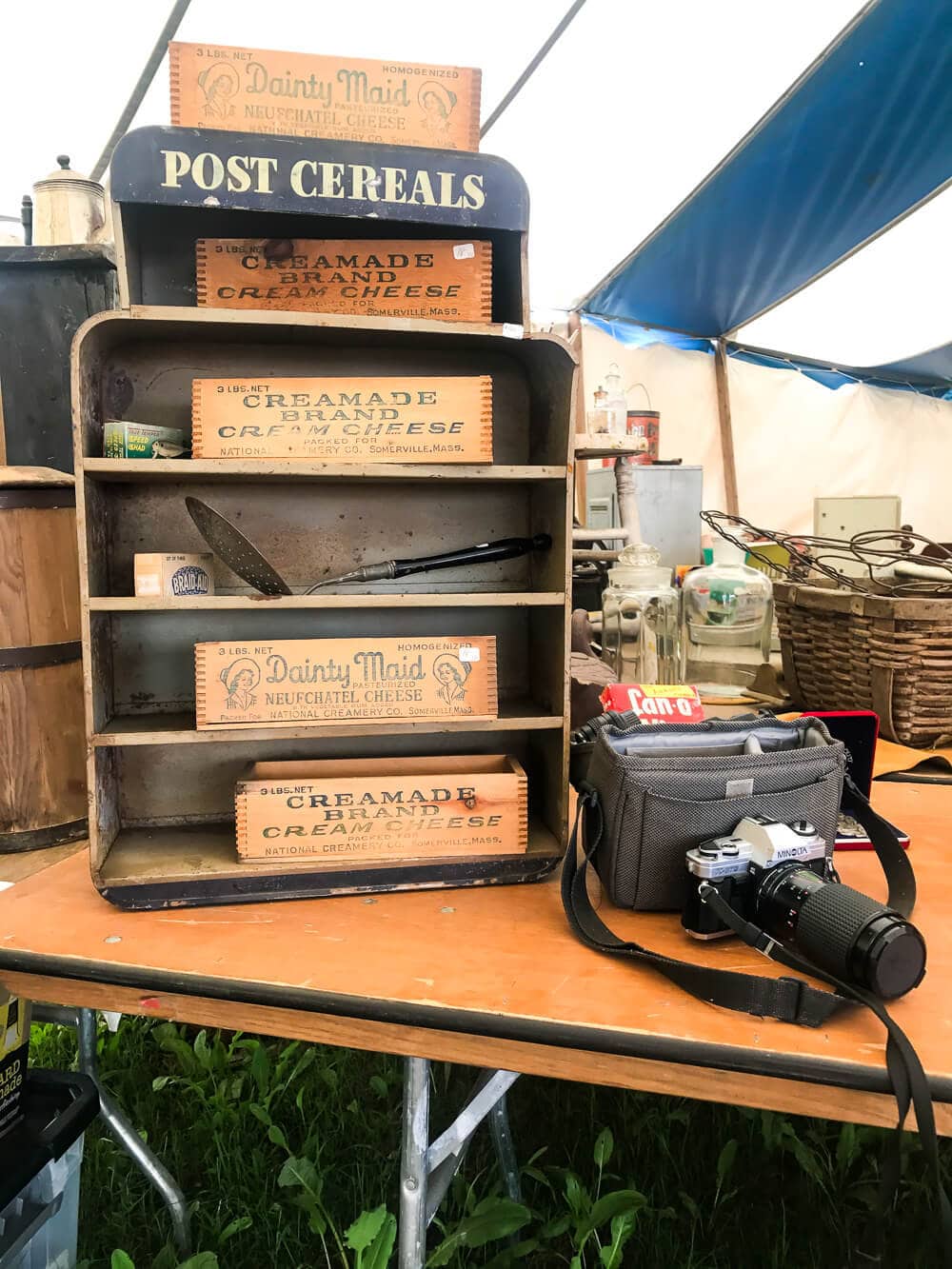 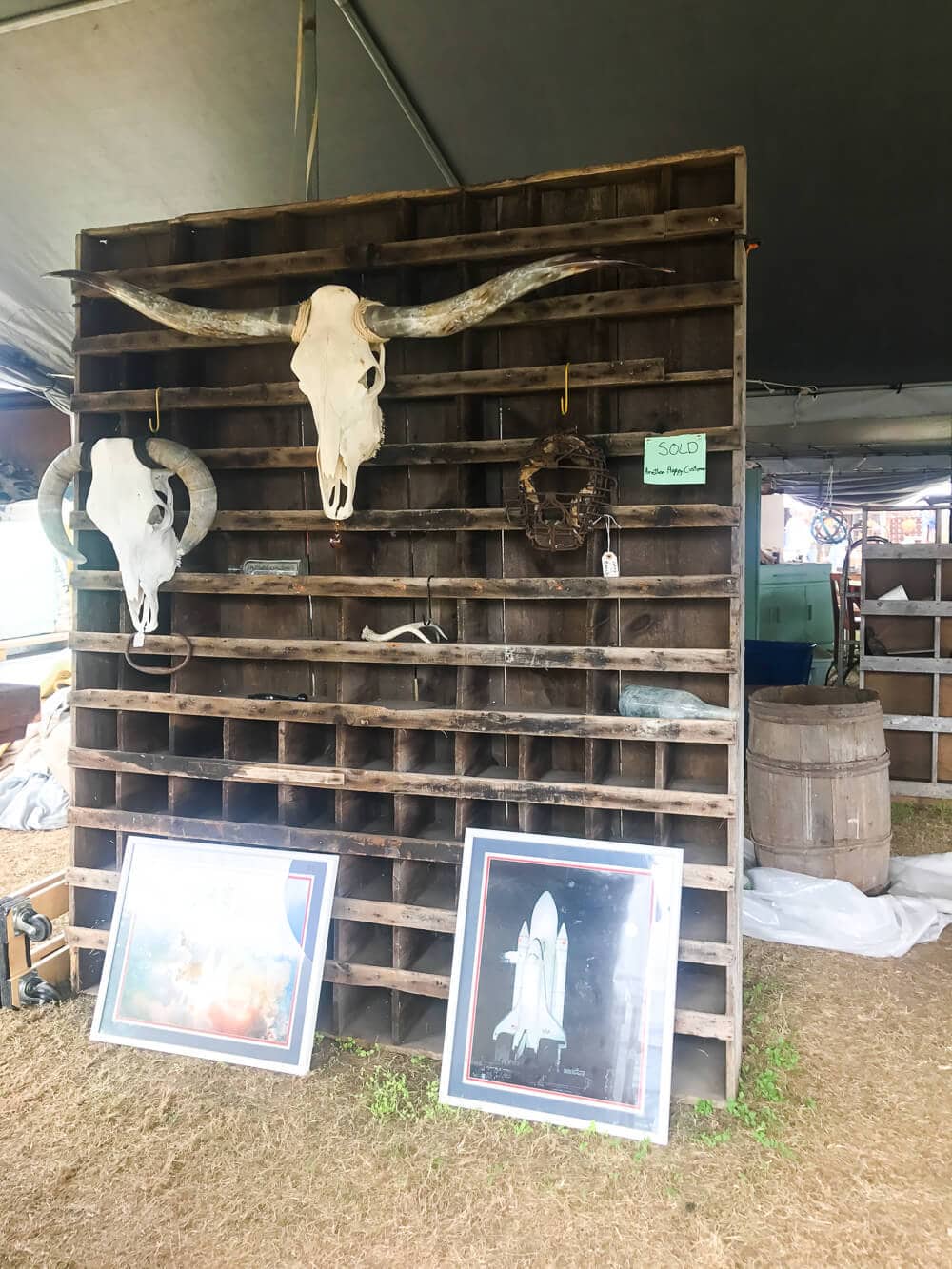 That last one was seriously well over 8-feet tall and one of the most amazing pieces I’ve ever seen in my life. It was already sold or else I can guarantee you I would have been begging Corey to bring it home with me.

I don’t even think I have room in my house for it, but that wouldn’t have been a problem. 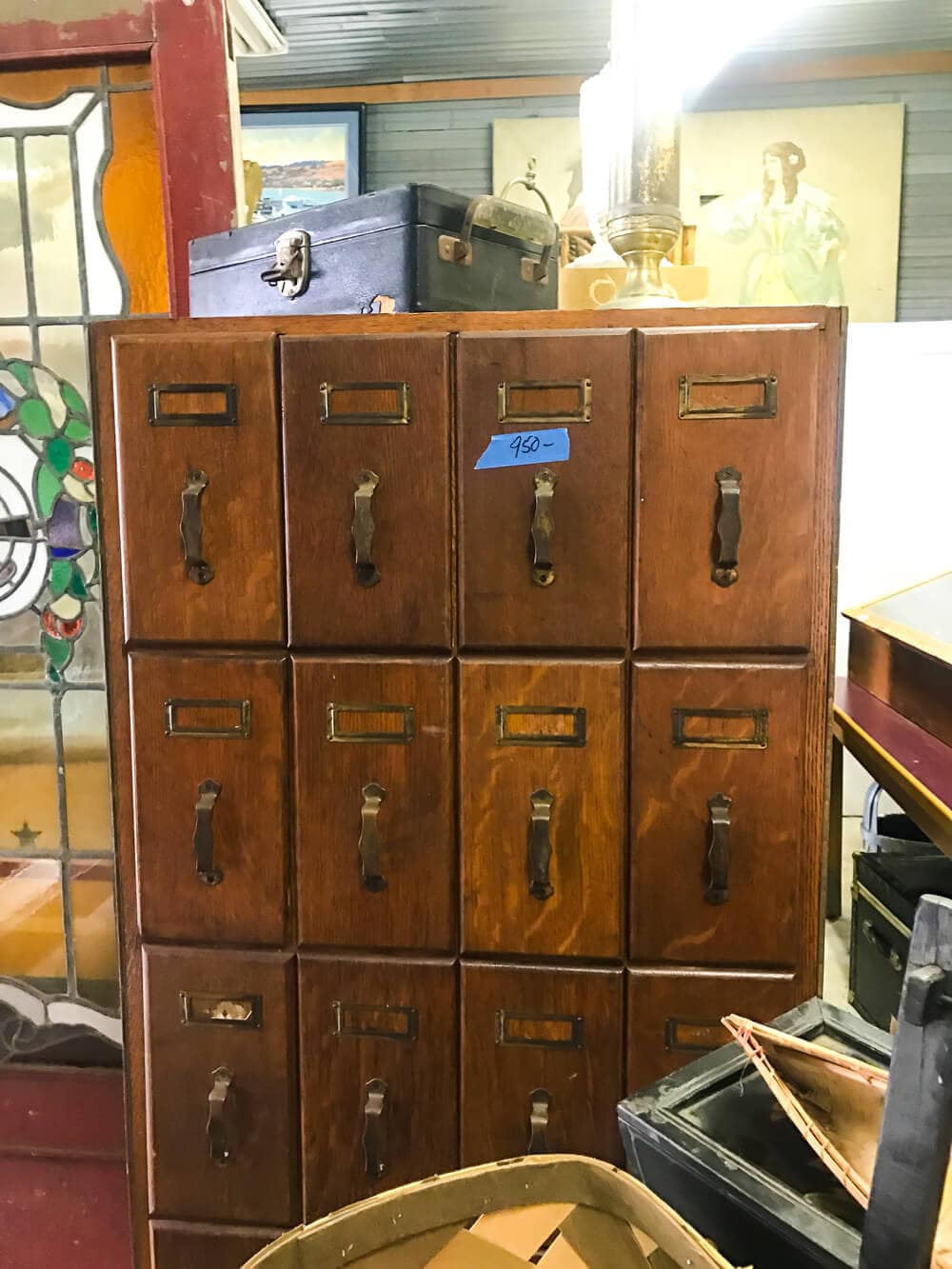 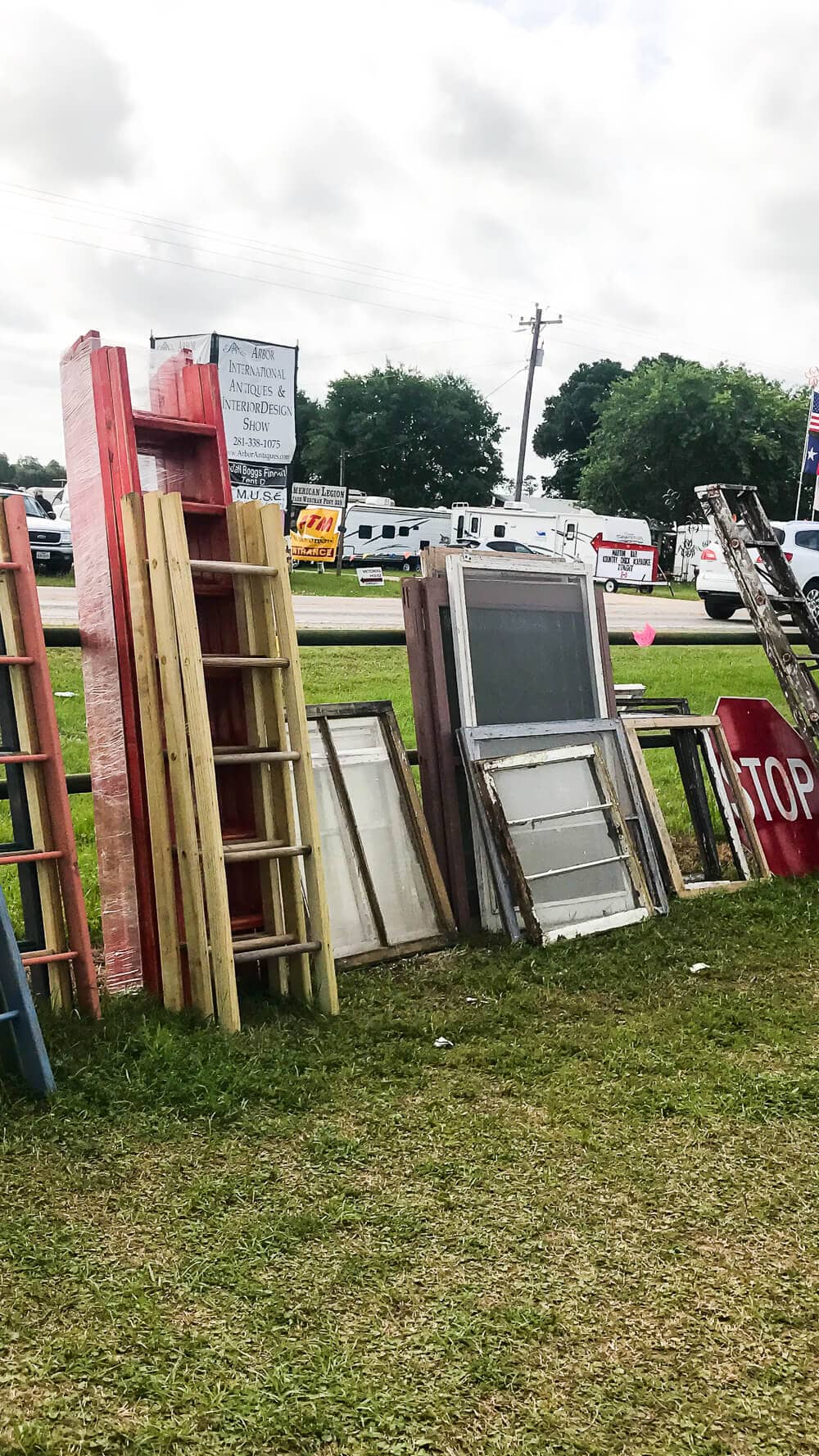 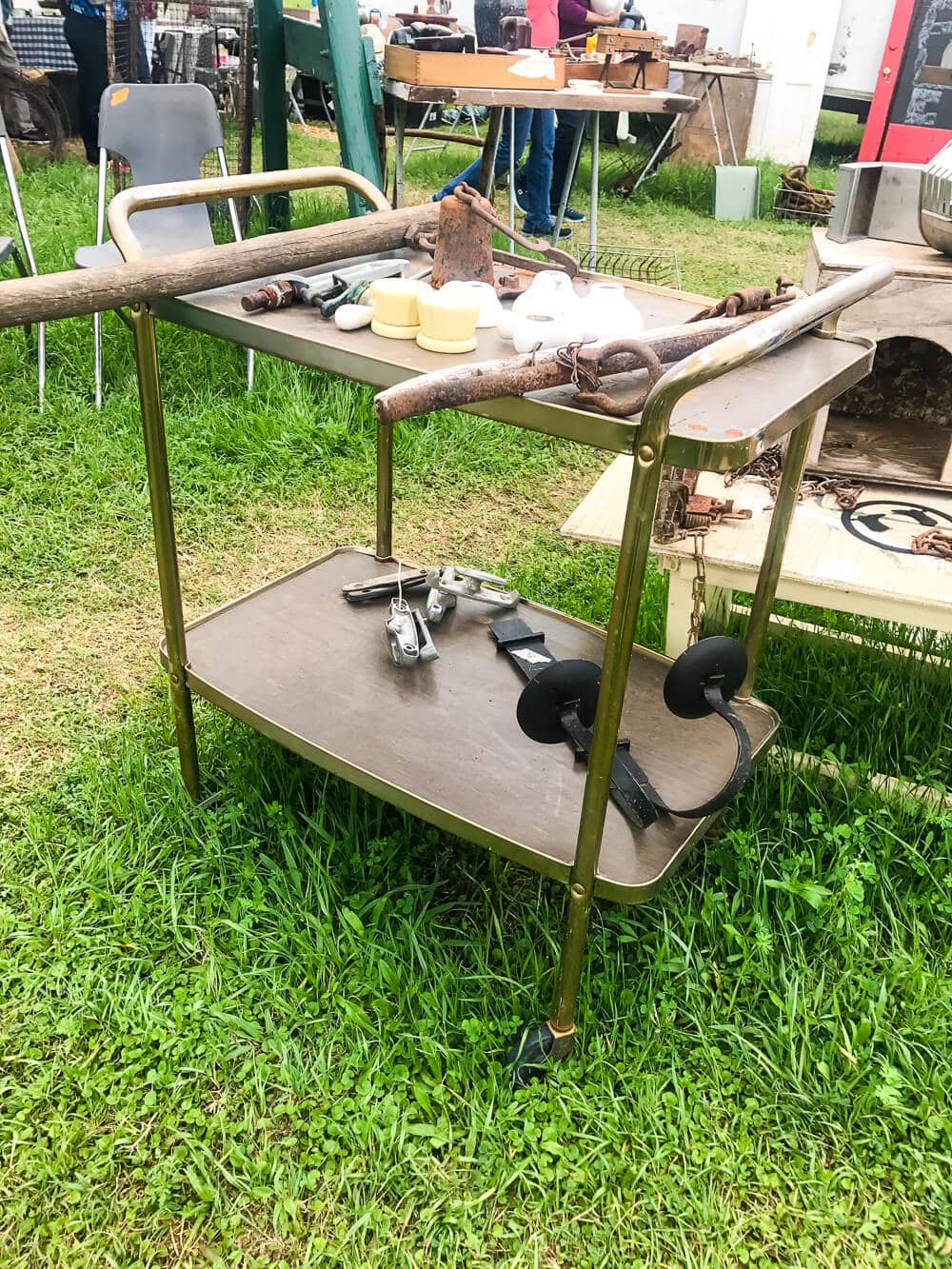 I love that there’s a great mix of really nice, already-finished pieces and things that need a little love. That bar cart above was a steal (I don’t remember exactly how much it was, but it was cheap!) and it really just needed a good solid cleaning to be absolutely gorgeous. That card catalog, on the other hand, was $950 and in absolutely stunning condition. I don’t think I’ll ever be comfortable dropping that much money on something like that, but wouldn’t it be nice if I was? 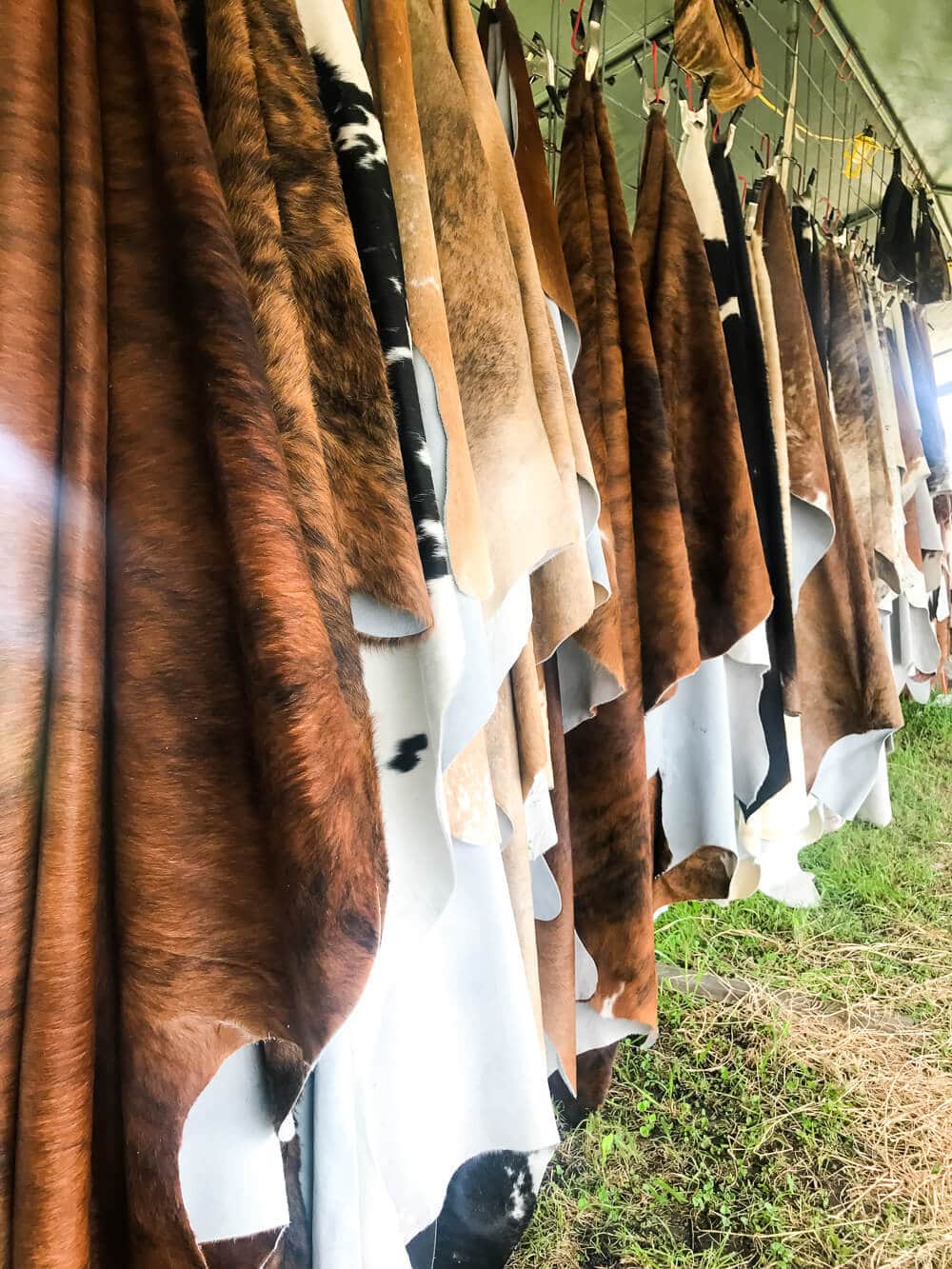 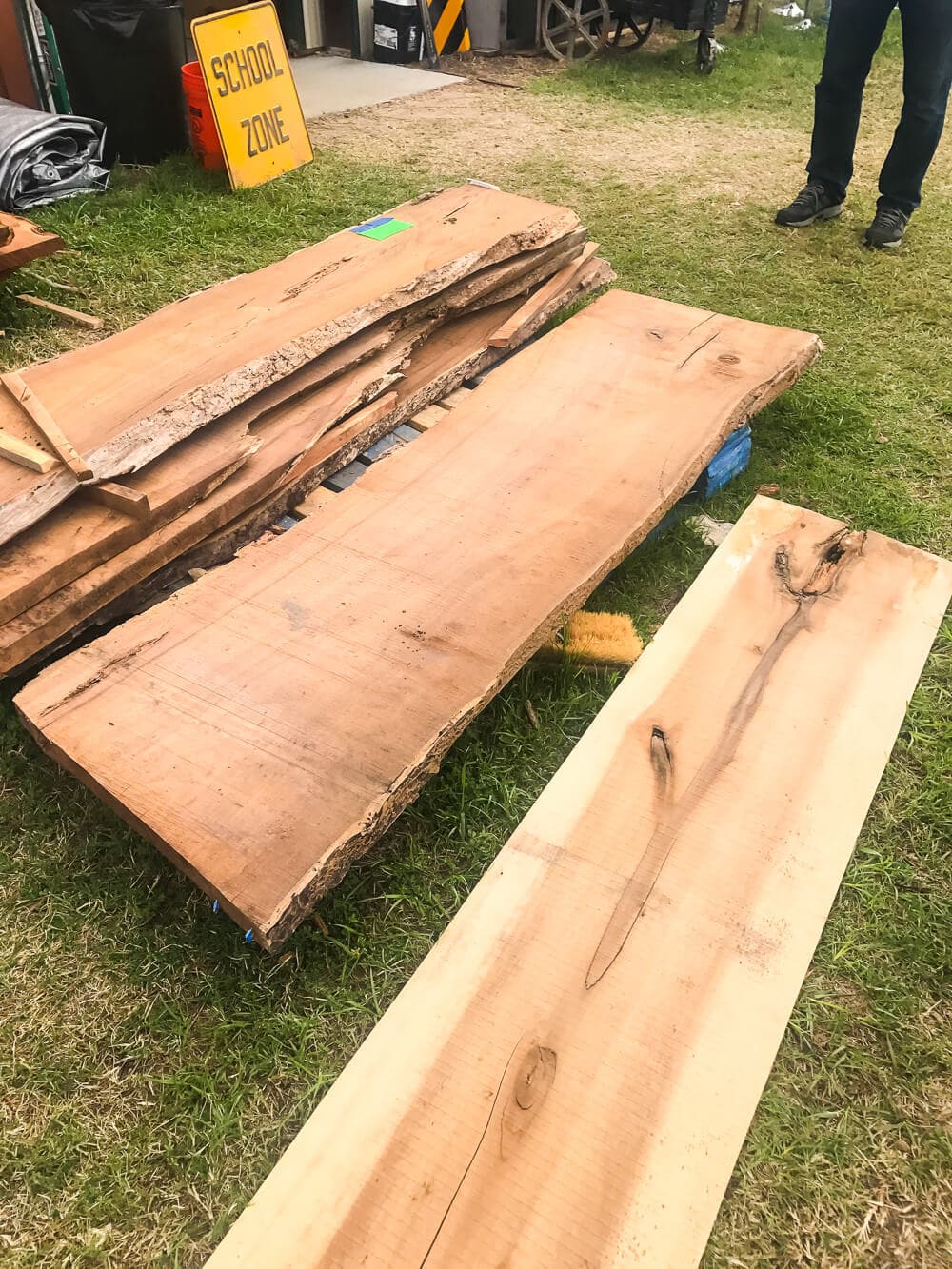 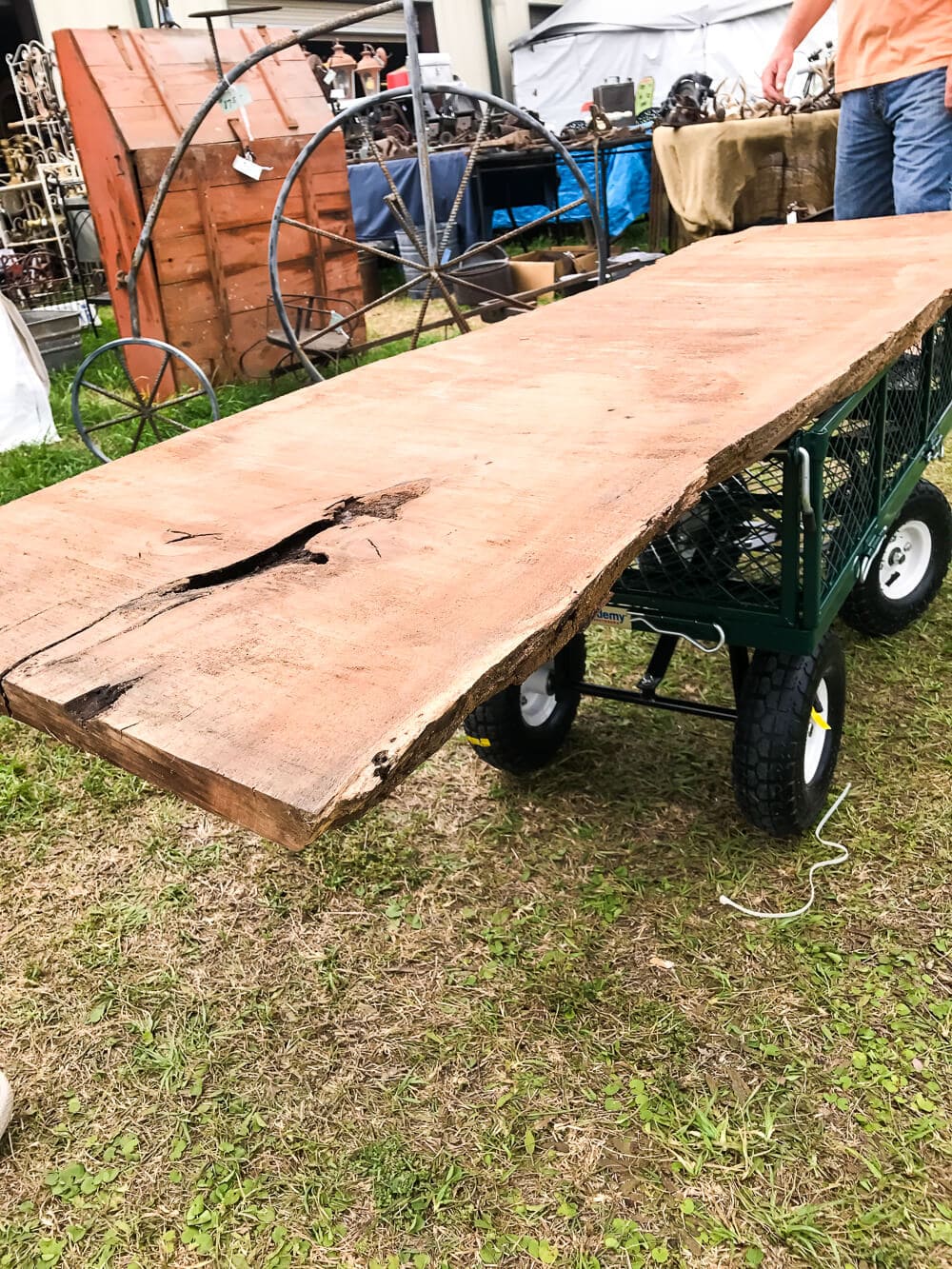 I swooned over the cow hide rugs, and we all swooned over these giant slabs of wood. We found a vendor who had several different types of wood for an absolute steal and my parents bought that gorgeous walnut slab to create an island for their kitchen. For the size, we all feel pretty confident they would have paid upwards of $1,000 at our favorite local wood supply store, but they paid under $300. I seriously had a hard time keeping my cool as they were completing the transaction because I wanted to do happy dances for them. I’m pretty sure my dad was struggling to hold it in too, considering the giant exhale he let out as soon as we walked away from the booth.

Don’t worry – you know I’ll share photos once he finishes building it. 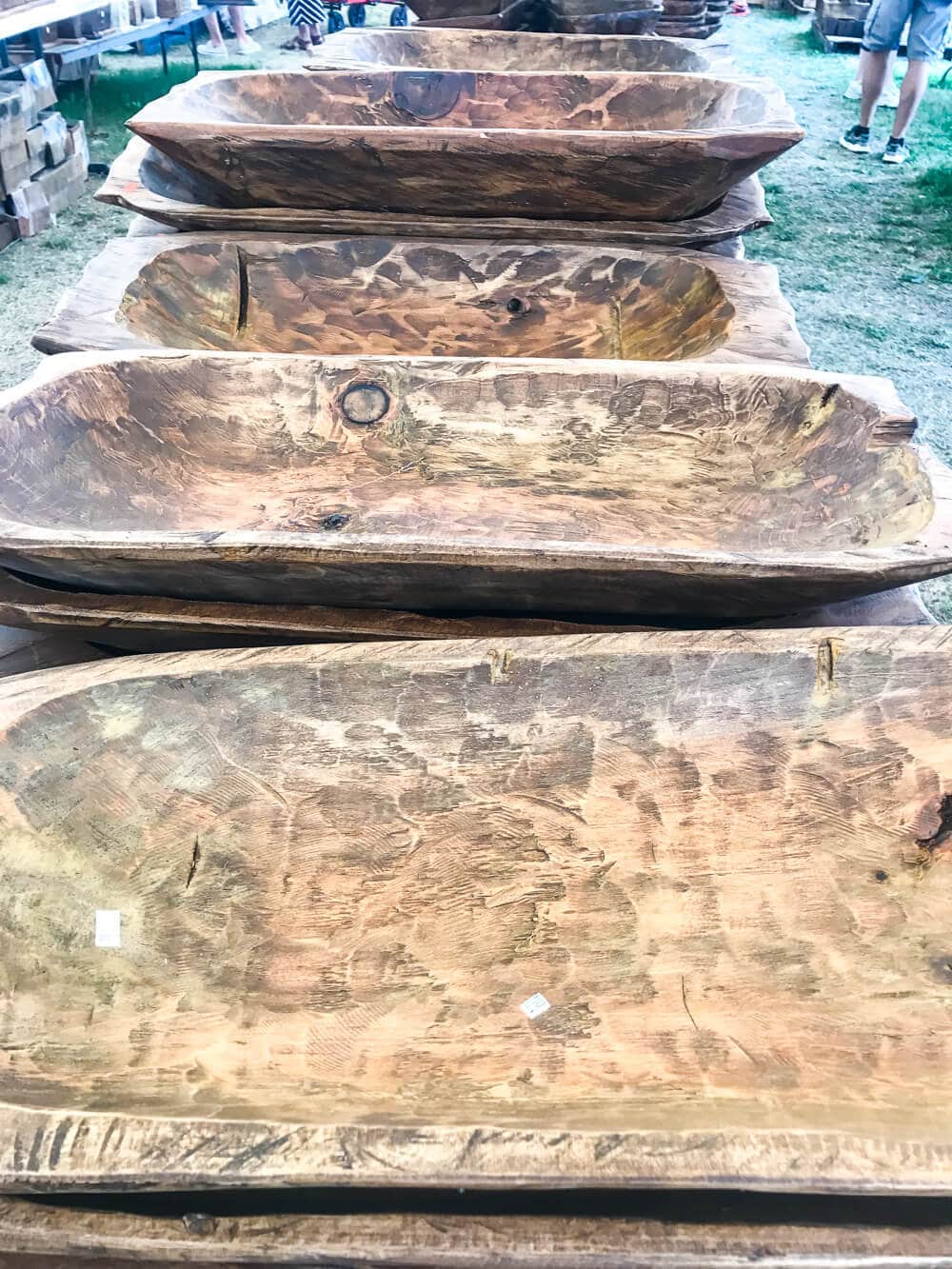 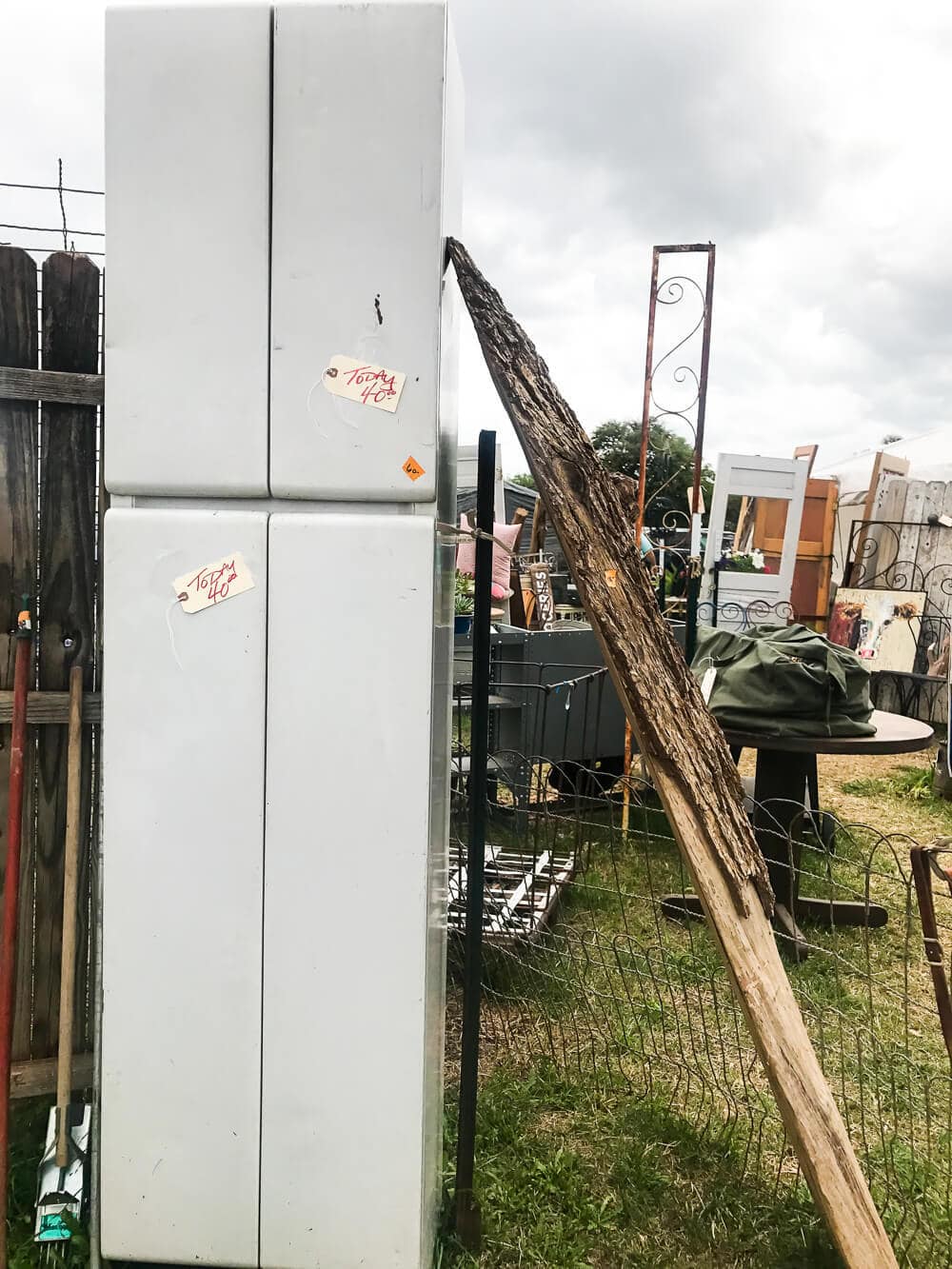 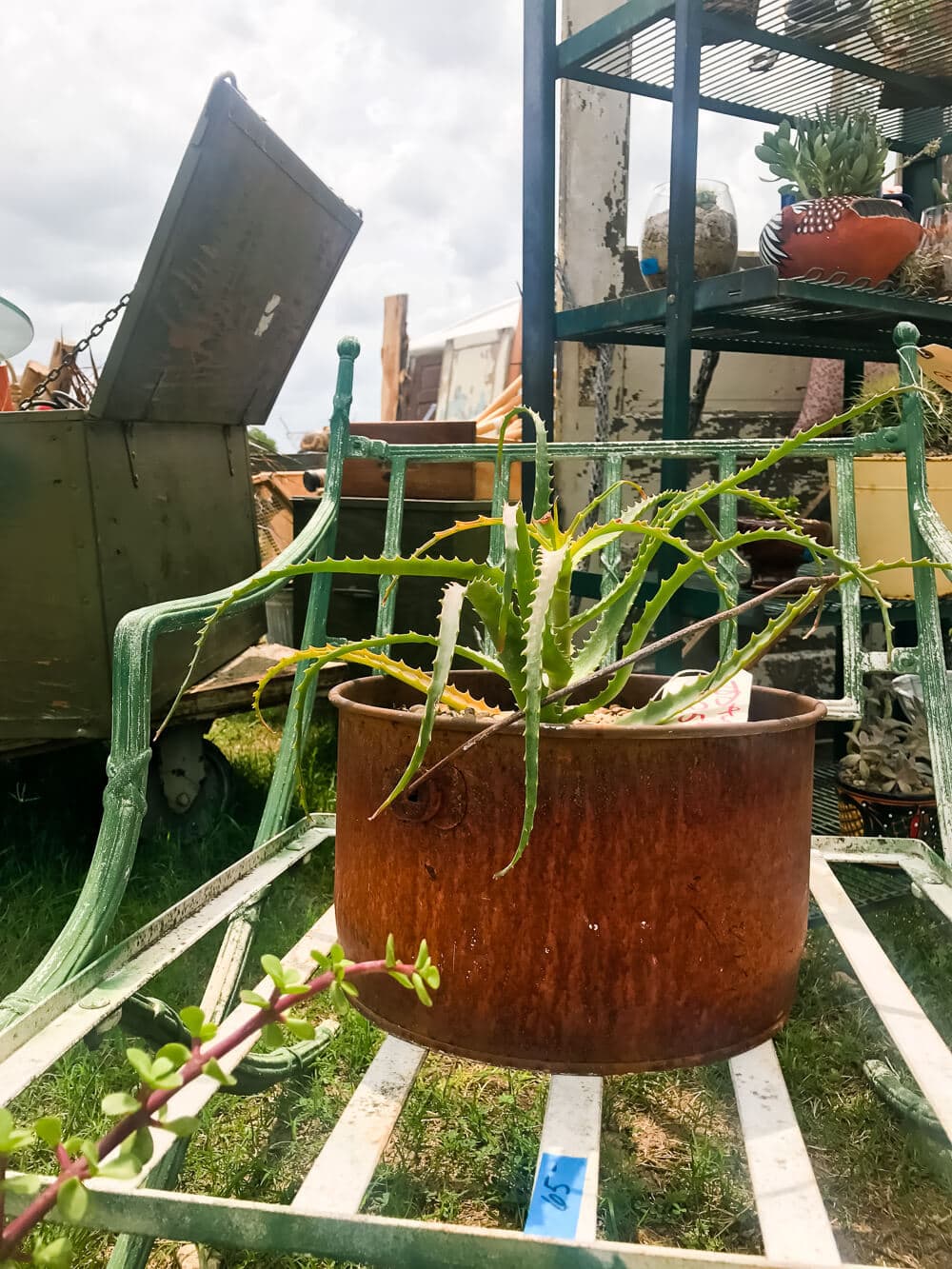 There were wooden dough bowls everywhere we looked and they were all a total steal. My mom and I both ended up buying one, and I probably could have bought at least 12 more considering they had them in just about every size and shape you can possibly imagine.

We also had every intention of buying that white metal cabinet above for our garage – it was only $40, in great shape, and would be perfect for storing odds and ends in the garage, but we had driven my car over to this section and left my dad’s truck back in a different section – by the time we went to go get his truck the traffic was so bad it would have taken us at least an hour to drive the 2 miles back to the booth. Next time, we’re just going to park right in that little section and be done with it! #lessonlearned 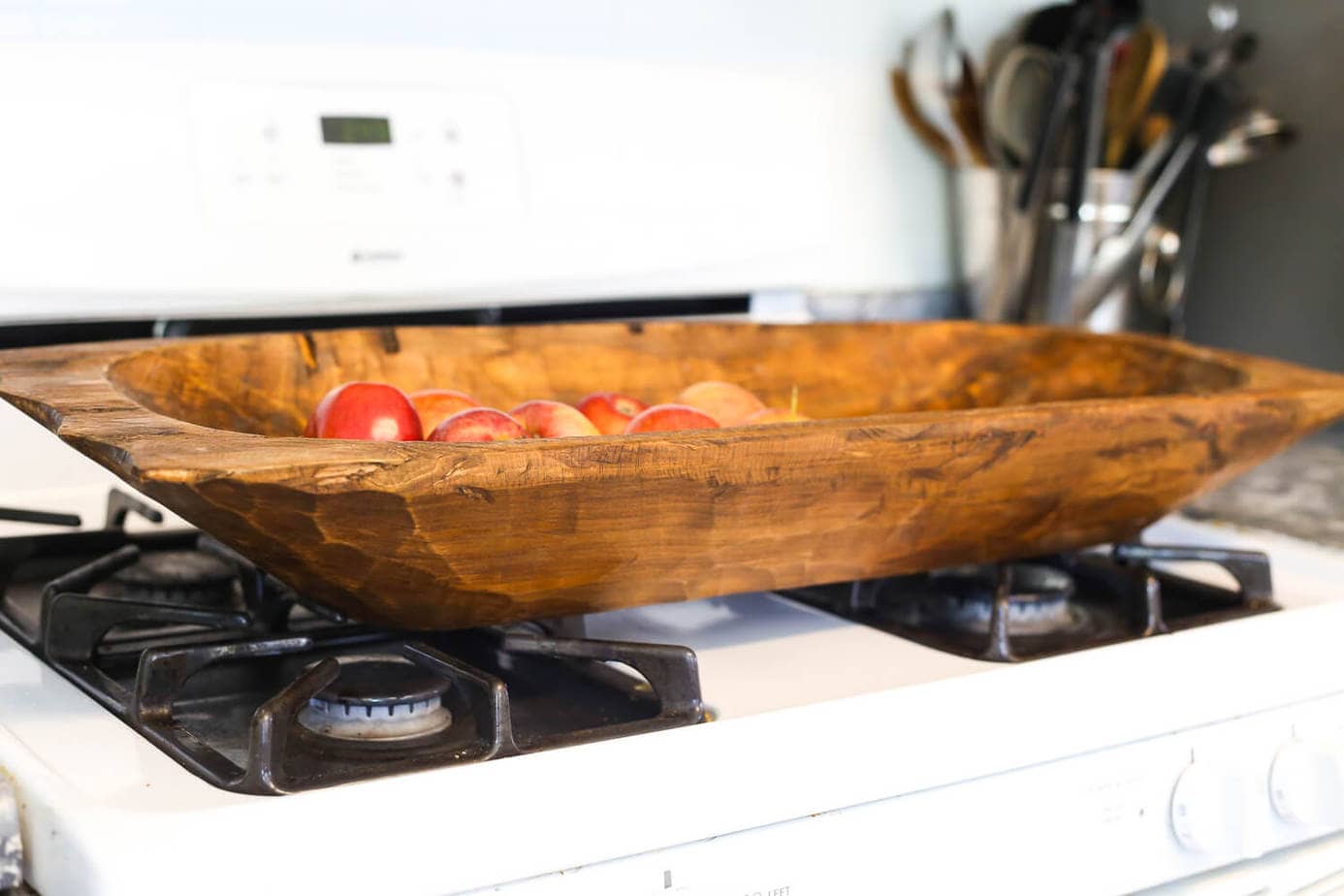 Well, I already mentioned my dough bowl. It’s seriously massive and I only spent $30 on it. I’m still pinching myself a little bit over that deal. I’m using it as a big fruit bowl in our kitchen for now, but I’m sure it’ll migrate around the house over time. It’s too pretty not to get used all over the place! I promise it doesn’t actually live on my stovetop – we had a sink issues when I was taking photos so the rest of the kitchen was a disaster. 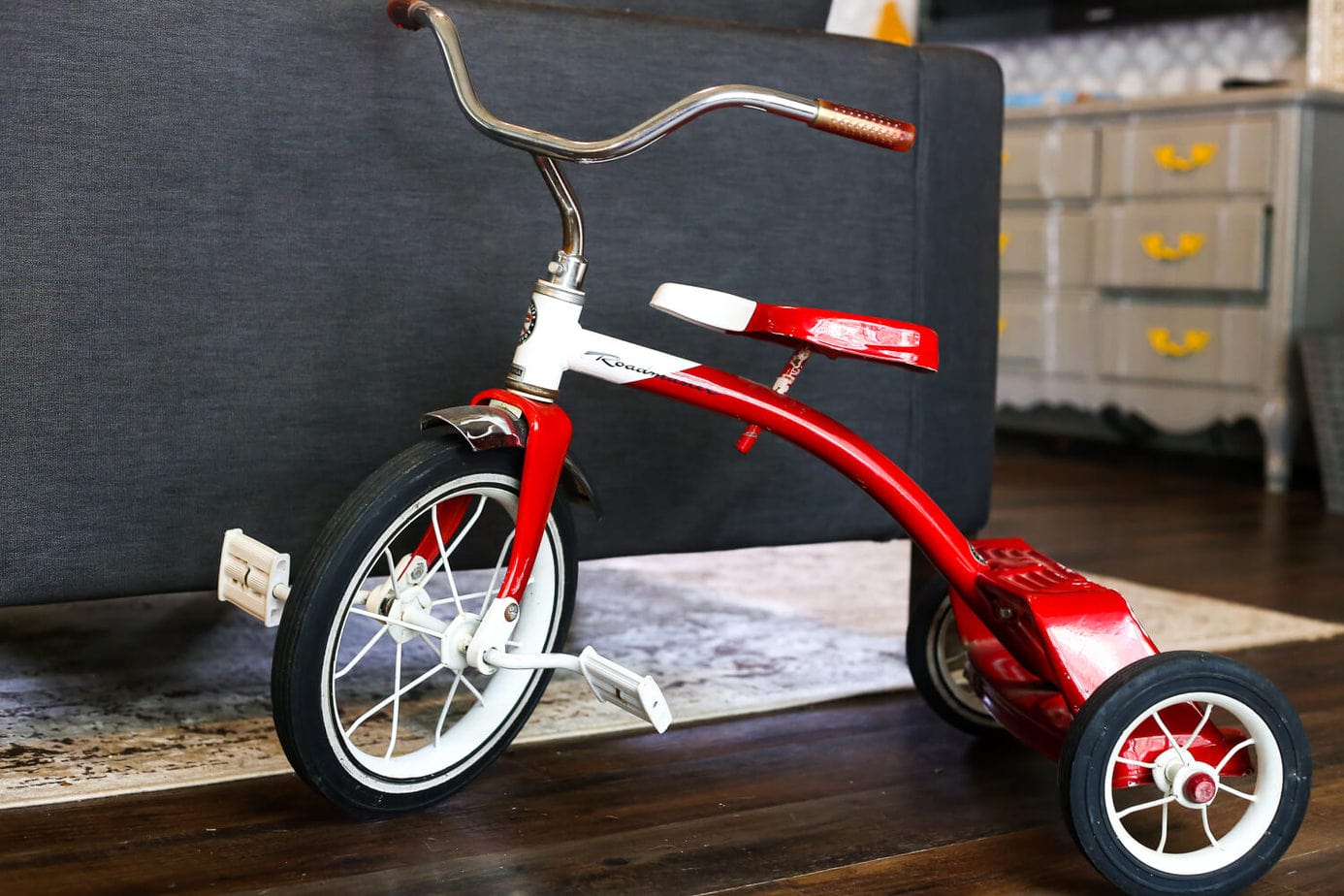 Our other major steal of the day was this adorable vintage tricycle we stumbled on. We’ve been wanting to get one for Jackson and when my mom saw this one we figured it would cost a fortune…nope – $30! We talked the vendor down to $25 and walked away giggling with excitement. Jackson was thrilled when he came downstairs and saw it the next morning, and I have a feeling we’ll be spending a lot of time outside this spring riding his new bike! 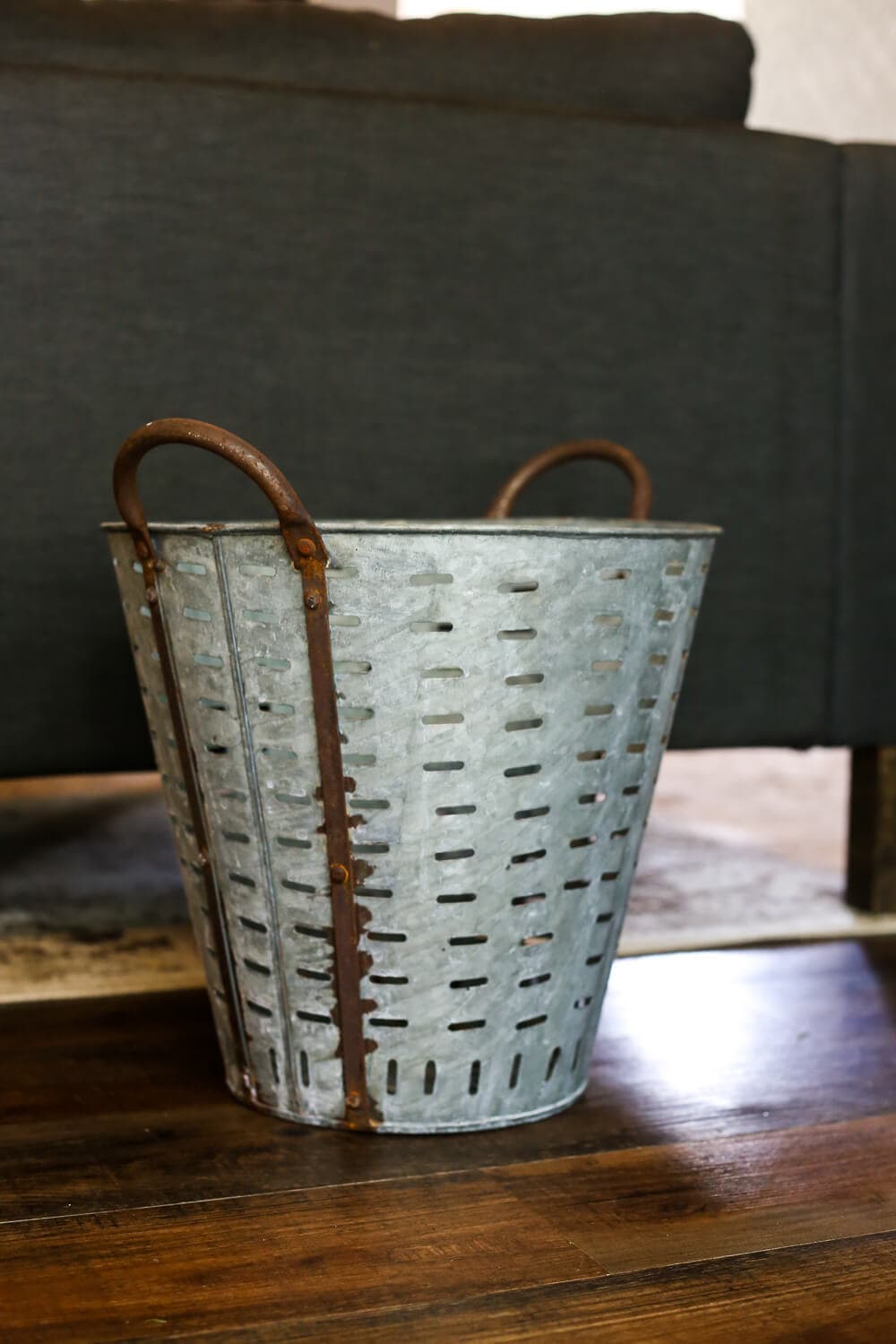 And finally, we got an olive bucket. Apparently these are a big thing right now. Did you know this? I had never in my life heard of olive buckets until we went to Round Top – they were all over the place and everyone was buying them. We saw them pretty consistently for about $25, none of the vendors were willing to negotiate on the price, and they were selling like hotcakes. Corey and I are total followers, so we felt like we wouldn’t be one of the cool kids if we didn’t get an olive bucket. I did some research when we got home and learned that we got a good deal – now I just need to decide exactly what I want to do with it!

I definitely don’t want to wait 6 years before going back to Round Top again – I’m thinking this needs to become a yearly tradition!

Maybe next year I’ll track that table down.

Previous Post: « Geometric DIY Wood Wall Art
Next Post: How to Turn a Dresser Into a DIY TV Stand »