Have you ever heard of the big antique fair in Round Top, Texas? It’s a massive antique fair that happens twice a year and literally takes over an entire small town in Texas. It’s really well-known because it’s so huge and has some amazing finds, and I’ve always really wanted to check it out.

We were lucky enough to get to go to the fair recently, and I wanted to share some of our favorite finds, along with a few tips for making the most of your trip to Round Top (or really, any big antique fair!) 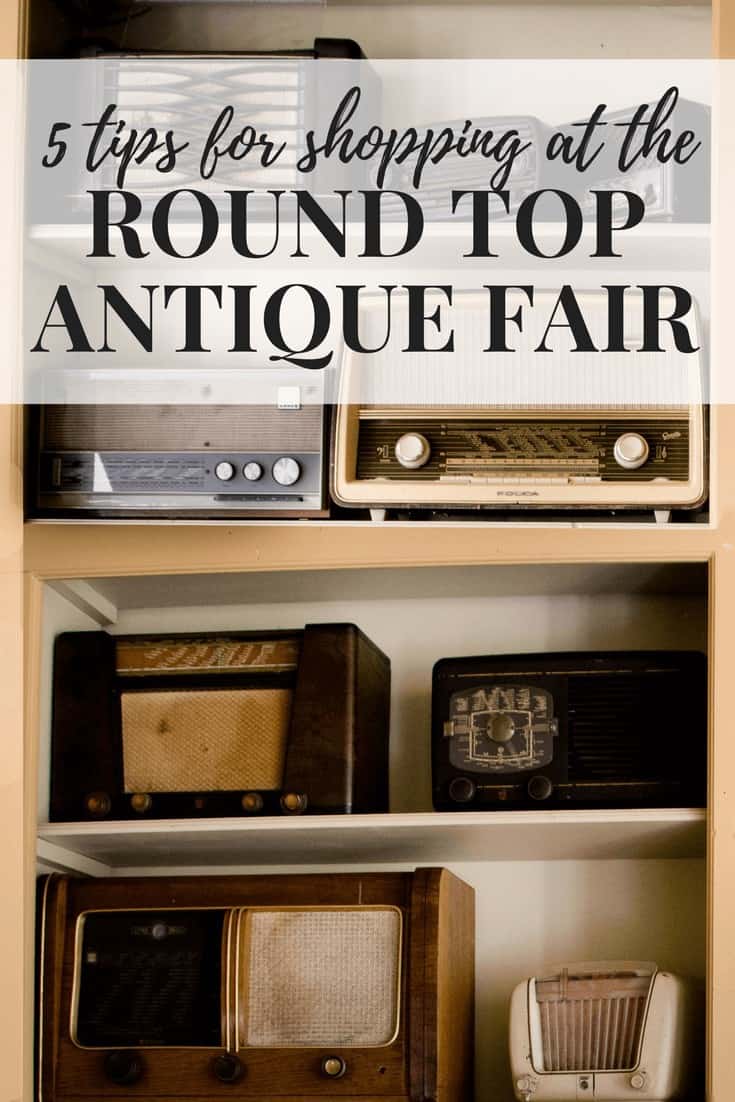 I had never visited the fair before, but I’ve heard nothing but amazing things about it. Corey and I were pretty excited to check it out, and we had absolutely no idea what to expect. We had heard it was large, but we weren’t sure exactly how large.

Y’all. It was nuts. When we were about 5-10 miles outside of Round Top we started to see areas with lots of tents set up. Apparently, in addition to the official antique fair, there are hundreds (thousands?) of antique dealers who come out to take advantage of the large crowds who’ll be there. There were miles upon miles of tents and it was so overwhelming – we had no idea where to even start!

It was nuts. When we were about 5-10 miles outside of Round Top we started to see areas with lots of tents set up. Apparently, in addition to the official antique fair, there are hundreds (thousands?) of antique dealers who come out to take advantage of the large crowds who’ll be there. There were miles upon miles of tents and it was so overwhelming – we had no idea where to even start!

When we were about 5-10 miles outside of Round Top we started to see areas with lots of tents set up. Apparently, in addition to the official antique fair, there are hundreds (thousands?) of antique dealers who come out to take advantage of the large crowds who’ll be there. There were miles upon miles of tents and it was so overwhelming – we had no idea where to even start!

We finally picked a spot and parked. The photos I’m about to show you do nothing to show how much there actually was, but let me just emphasize that this is a very small part of the section we stopped in.

And the section we stopped in was just one of DOZENS that were equally large! 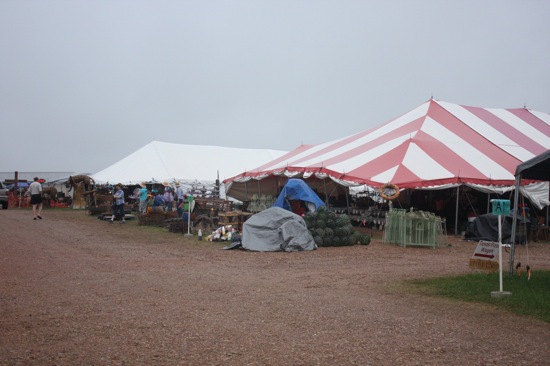 There were booths as far as you could see in every direction, along with an insane amount of things for sale. We really didn’t have any method to our shopping – we just dove in and started looking!

We’ll chat about the finds in a minute, but first let’s get to the tips.

Okay, read to see the good stuff? Let’s do it. (But, if you’re still looking for tips on shopping at antique fairs, check out this post with my favorite flea market tips!)

We found a ton of stuff, and we found that most of it fell into one of two categories: stuff we really liked and stuff that totally weirded us out. There were some things that fell into the middle, but we were kind of shocked at how many incredibly strange things we saw that day.

Let’s start with the stuff we really liked. Let’s just say it’s probably a good thing Corey and I set a limit for ourselves before we arrived at the fair, because I could have spent a serious amount of money here! 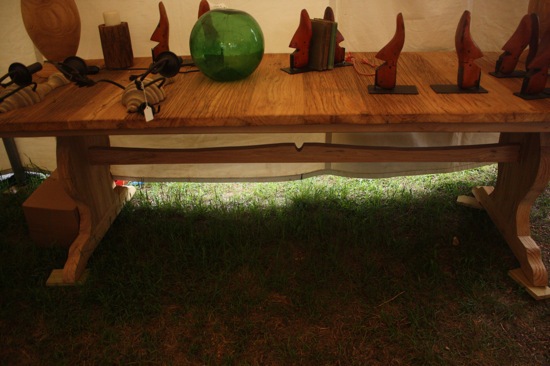 I thought this table was really cute – and it had a ton of potential if it was spruced up a bit! 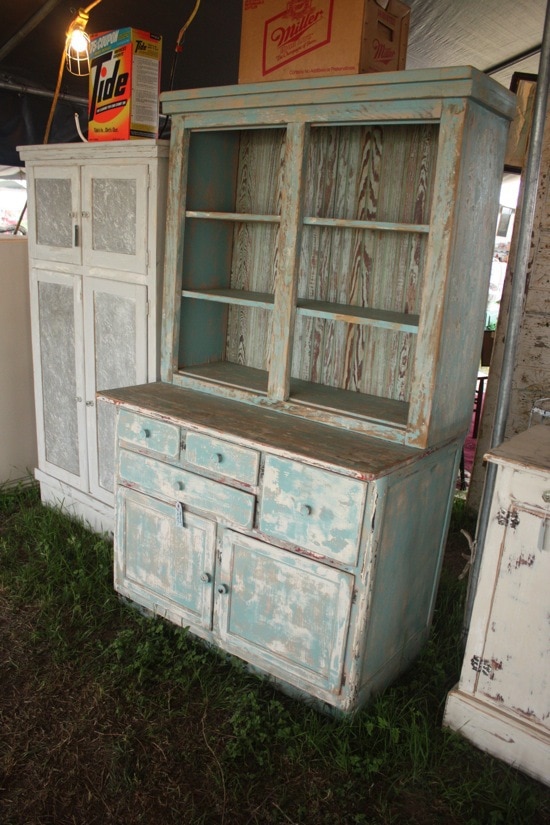 This thing makes me drool. Can you even imagine how gorgeous it would be if you sanded it down and painted it white (or stained it a nice, dark brown) and painted the inside of the shelves a fun color? Ohhh I wanted this so bad! 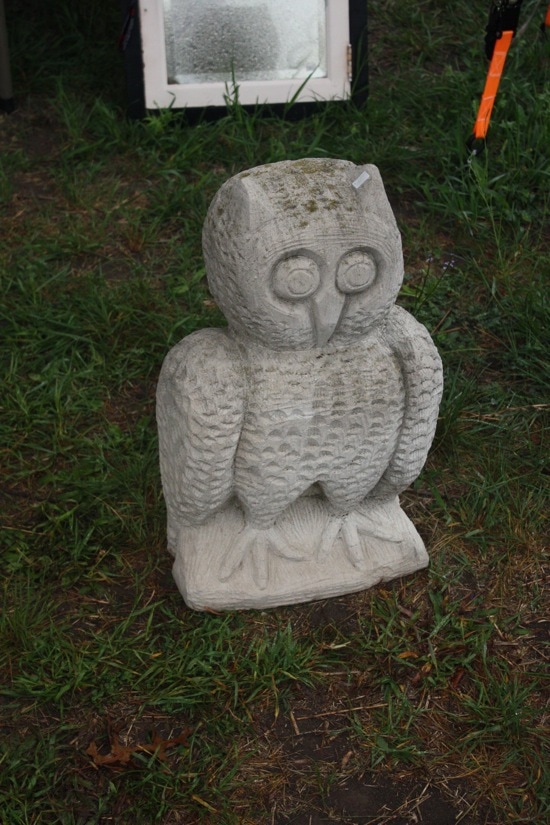 I’m not usually one for lawn ornaments, but this little guy just melted my heart. Adorable! 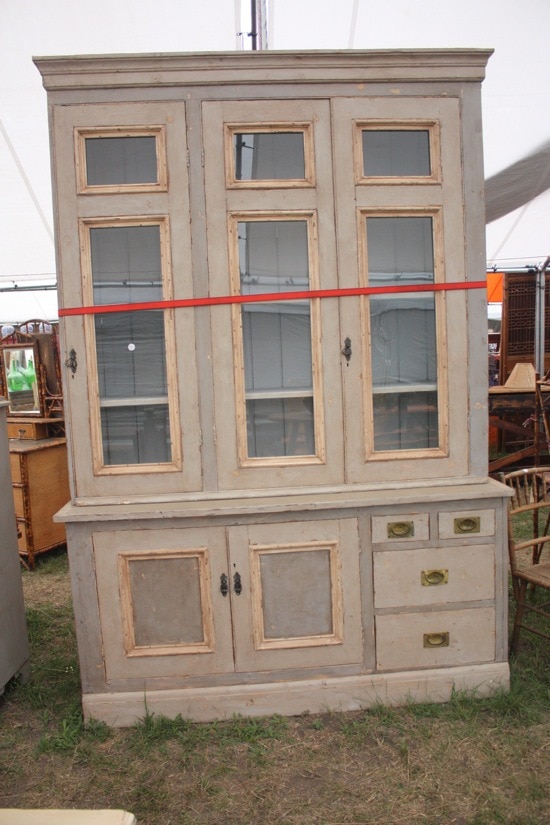 This was another cabinet that we really liked – look at the chair sitting off to the right to get an idea of exactly how massive it was. 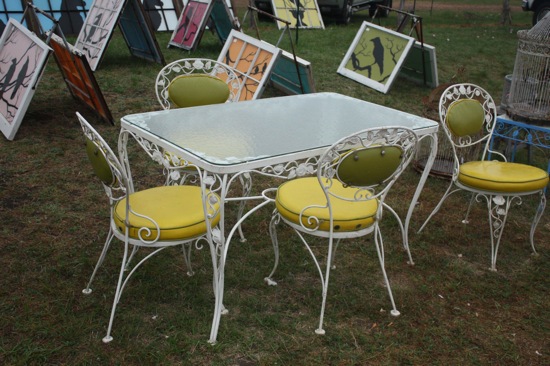 I loved this vintage dining room set. It totally doesn’t fit in with our style or anything else in our house, but it was just so darn cute! 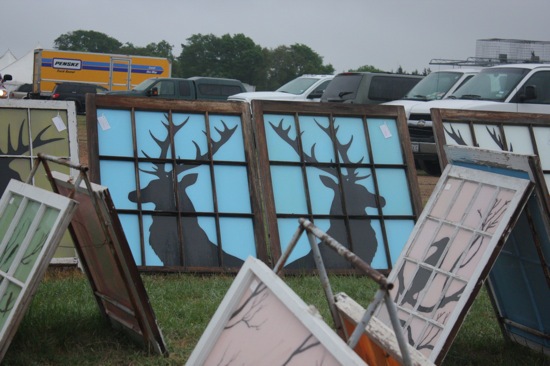 Again, these guys don’t fit in with our style at all, but I thought it was such a unique idea, and I loved the modern look of them. There were several different designs in a bunch of different colors. 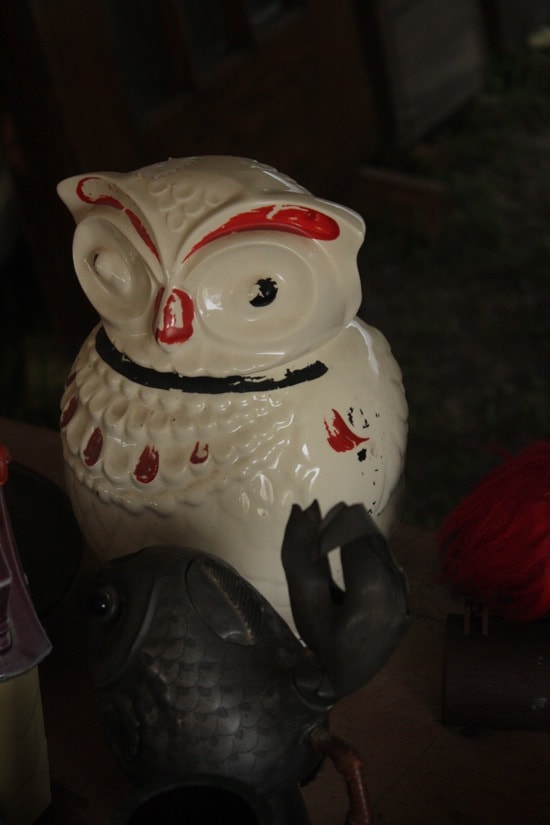 I was thisclose to snatching up this cookie jar for my sister and spray painting him all white. He reminded me of one we were recently drooling over at Anthropologie, but unfortunately he was almost exactly as expensive, so it was a a no-go. 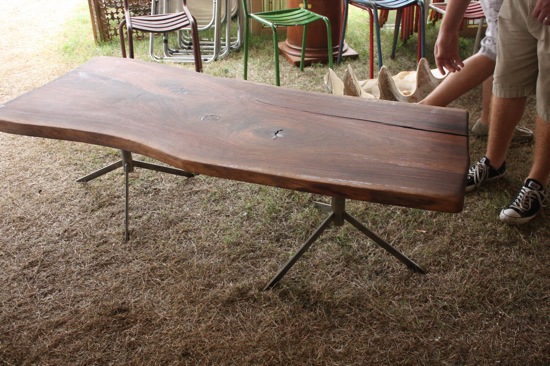 Corey and I were very seriously considering buying this gorgeous coffee table until we learned how far out of our budget it was. My dad informed us that the price was actually beyond fair, because a large slab of wood like that would cost an insane amount of money. Unfortunately, we didn’t have $750 to drop on a coffee table, so we had to pass on it.

And, I’ve saved the best for last. I am not exaggerating when I say that I still think about this next piece of furniture several times a day and am kicking myself for having to pass up on it. It almost would have been worth completely emptying out our bank account to buy it, but we sadly had to turn it down.

What piece of furniture could me, possibly the most frugal person EVER, possibly be willing to empty out my bank account for? 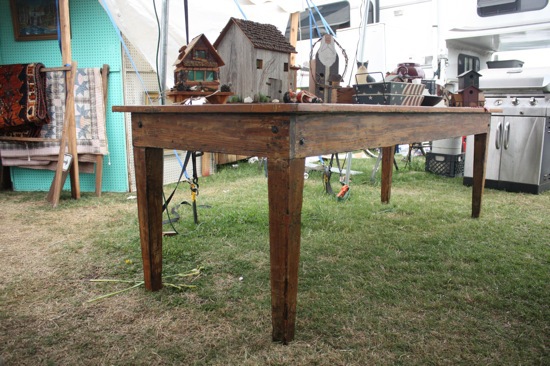 A table, you ask?

Oh, no. Not just any old table. On the side of the table is this little stamp: 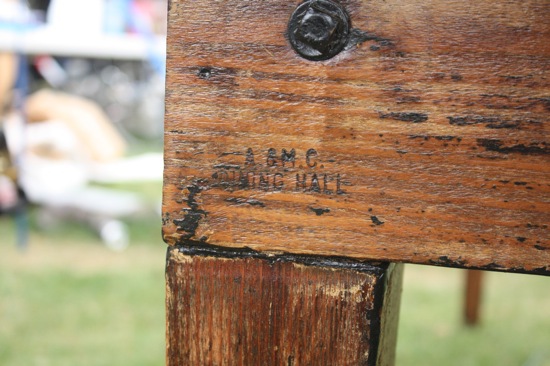 This, my friends, is a table from Sbisa dining hall at Texas A&M. It lived there from 1912 to 1926 and I want it in my home so bad I could cry. It’s an incredibly gorgeous table, and the price wasn’t actually even that bad. But, unfortunately, we are pretty broke right now and it just wasn’t in the cards.

I almost shed a tear as we had to walk away from it.

And, now that I’ve got myself all depressed over the table (again), let’s lighten the mood a bit.

Here are (a few of) the things that made us giggle, do a double take, or stop and say, “what the HELL is that?” 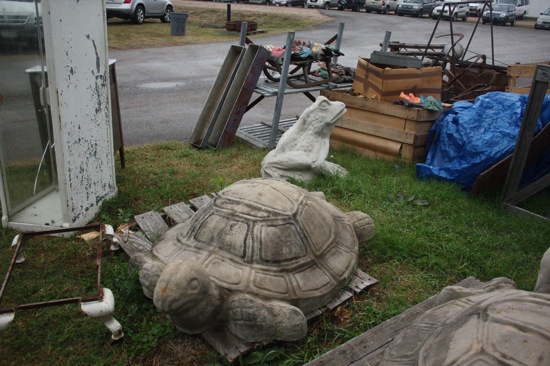 Apparently, people that frequent antique fairs love large lawn ornaments because these guys were all over the freaking place. For a bit of size reference, that turtle was probably about 4 feet long. Yeah. They weren’t petite turtles. 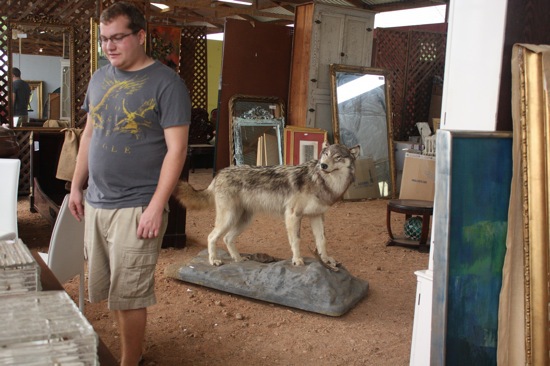 This guy almost made me pee my pants when I turned a corner and found him staring at me. Unfortunately, he and his friends are another thing that antiquers must love – there were dead creatures all over the place. We saw a stuffed porcupine, a stuffed boar, and countless bones, skeletons, animal skins, and any other dead animal product you can imagine.

Need a creepy, realistic-looking painting of a random dog? This booth is your place! 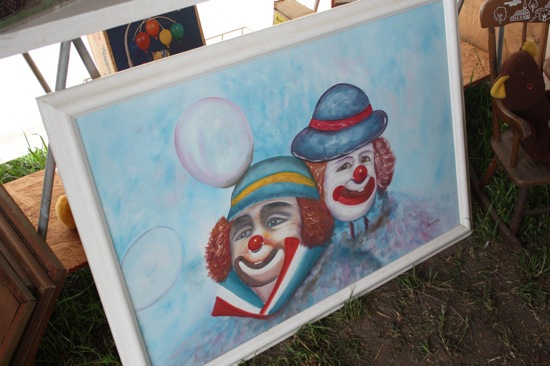 This one wins the award for scariest painting ever painted ever in the history of paintings. 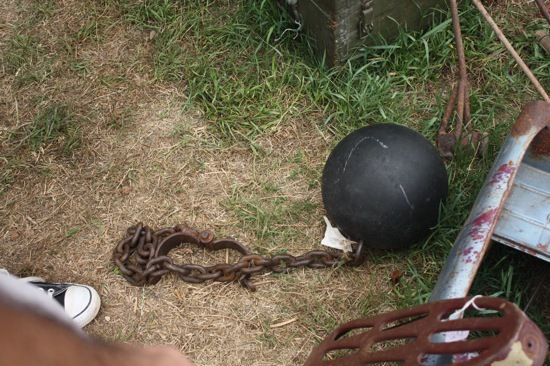 The ol’ ball and chain. 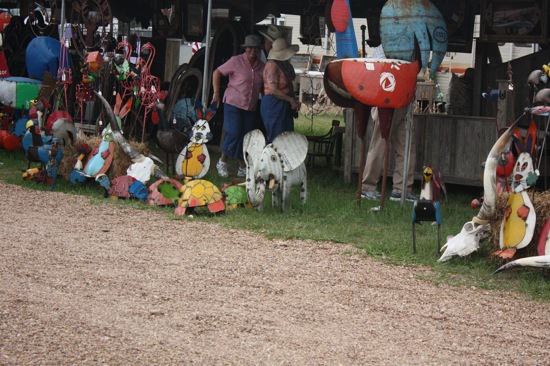 Just like the giant cement amphibians, there was no shortage of sheet metal lawn ornaments. This little elephant was actually pretty damn cute, but we saw larger-than-life cows, horses, dragons, people, and just about any other thing you can imagine that can possibly be made out of sheet metal. 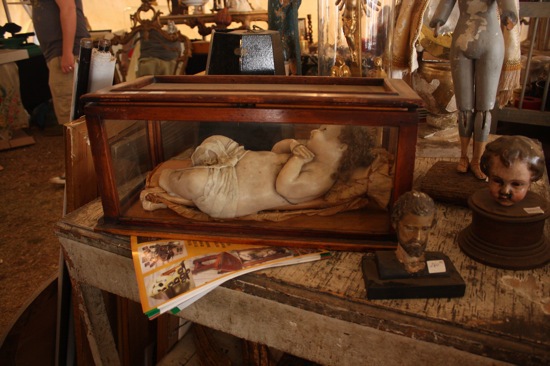 A creepy, lifelike baby Jesus hanging out in a glass coffin? Yes, please.

Oh, and guess how much he cost.

And that’s all I have to say about that.

Okay, you should probably make sure you brace yourself for this next one. It was the creepiest of the creepy when it came to this antique fair, and even though we only saw a fraction of the fair, I think it’s safe to say it was the scariest thing there (yes, even scarier than the clown painting). 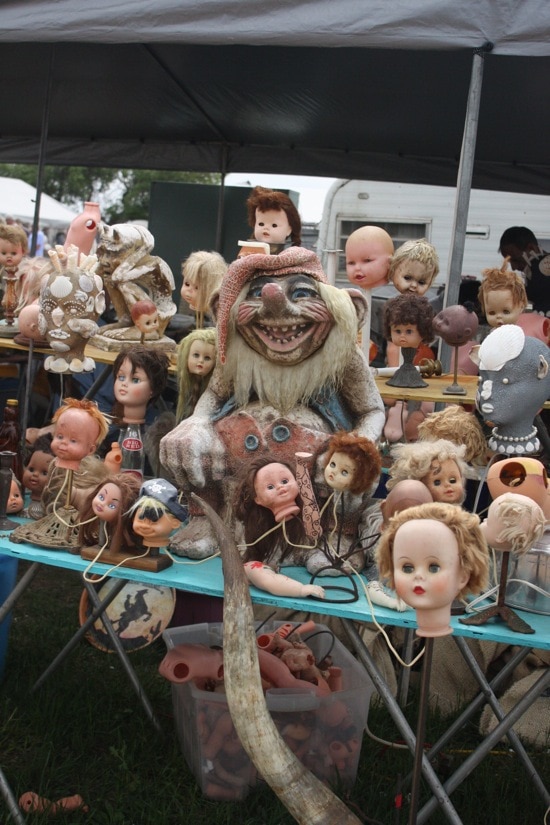 This is just a small sampling of the giant collection of doll heads that this booth has. I mean, the troll is scary enough on his own, but when you put him on a table full of doll heads, place that table next to a small Christmas tree decorated with doll heads and surround all of THAT with large glass containers full of doll heads…you have the creepiest display ever.

I apologize for not taking photos of the rest of the display, but I was too horrified to take more than one photo. And then, once the shock wore off I was laughing too hard to remember to take any more.

Have you ever been to an antique fair? Did you have as much fun as we did?!