Oh boy, do I have a doozy of a story for you today, my friends.

Seriously, you’re going to want to get comfortable for this one. Grab a cup of coffee and settle in with a blanket. I’ll wait.

You good? Let’s chat. Oh, but first…let me forewarn you that the photos in this post are not your typical pretty “after” photos. These are solid still-in-progress photos and they’re unlikely to inspire you to go make over a room. 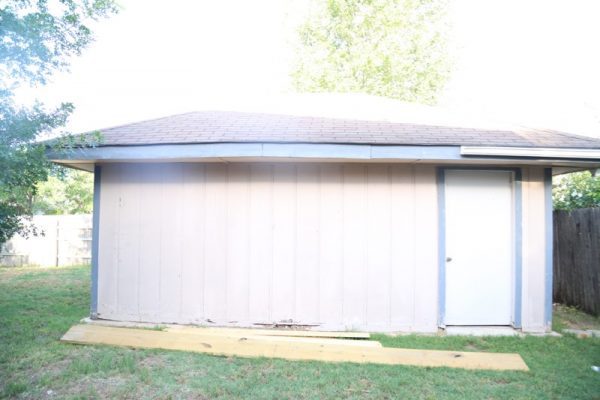 So, if you’ve been reading for a while you might know that we have a workshop in our backyard. It was one of the huge perks when we were first looking at this house, and was actually one of the deciding factors when we decided to make an offer. We have loved having the extra space in our backyard to work and store things, and we definitely feel spoiled to have it!

The shop was built by the previous owner and, as we have learned a time or two before, his DIY prowess was not exactly as extensive as he seemed to think it was. Ever since we first moved in, the floor of the workshop has had a giant bump in the middle of it – it was almost like a dome-shaped flooring, it was so bad. It was next to impossible to put anything in the middle of the room, and it made it significantly harder to get any work done in there because the entire floor was so un-level. You couldn’t even open the door all the way without a significant amount of effort, because it was bumping into the flooring.

In addition to that, the room had basically zero organization system and, rather than dealing with that when we first moved in, we put off doing anything about it. So, over the last five years the workshop has slowly spiraled into more and more chaos until it became completely and utterly unusable. 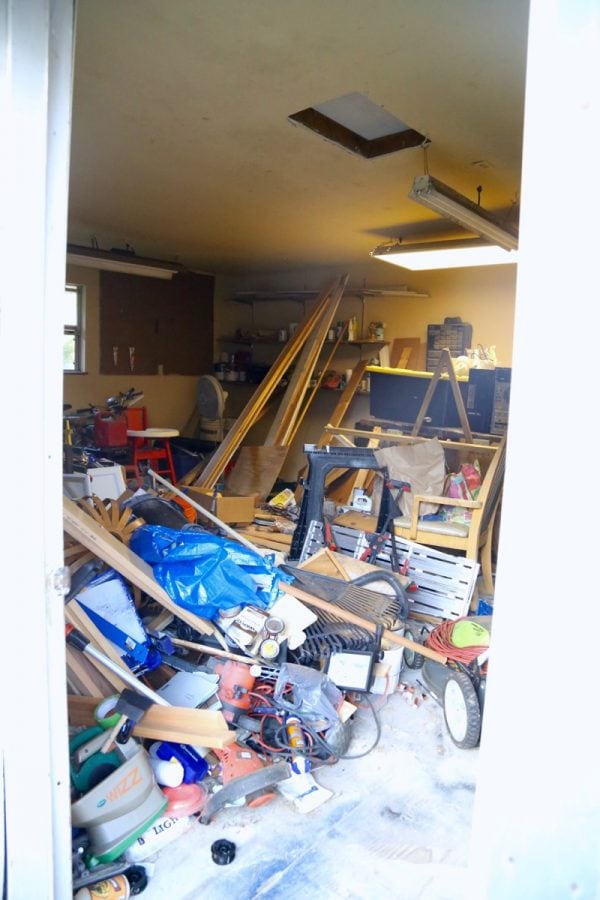 I am not exaggerating. It was like going on a great (and dangerous) adventure any time we needed a tool.

We’ve been doing a lot more projects around the house lately, and Corey has some aspirations to start building and selling a few things, so we really needed to get this situation under control. We knew the biggest part of the project would be fixing the flooring, but we assumed the boards were just warped due to lack of proper ventilation, so we figured we could just rip up the plywood, drill a hole or two in the concrete under the building to allow for air flow, replace the wood, and be done with it. Easy peasy. 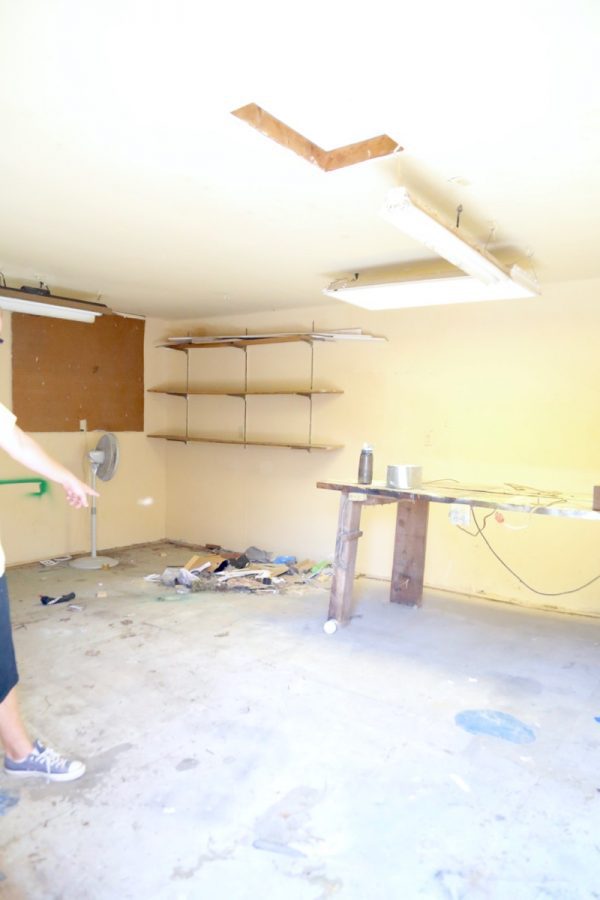 We started off by cleaning out the workshop (obviously). We removed every single thing in there, threw a ton of trash away, and tossed it all out in the yard. It was kind of appalling how much stuff we had managed to squeeze in there – seriously, for about two weeks my backyard looked like this: 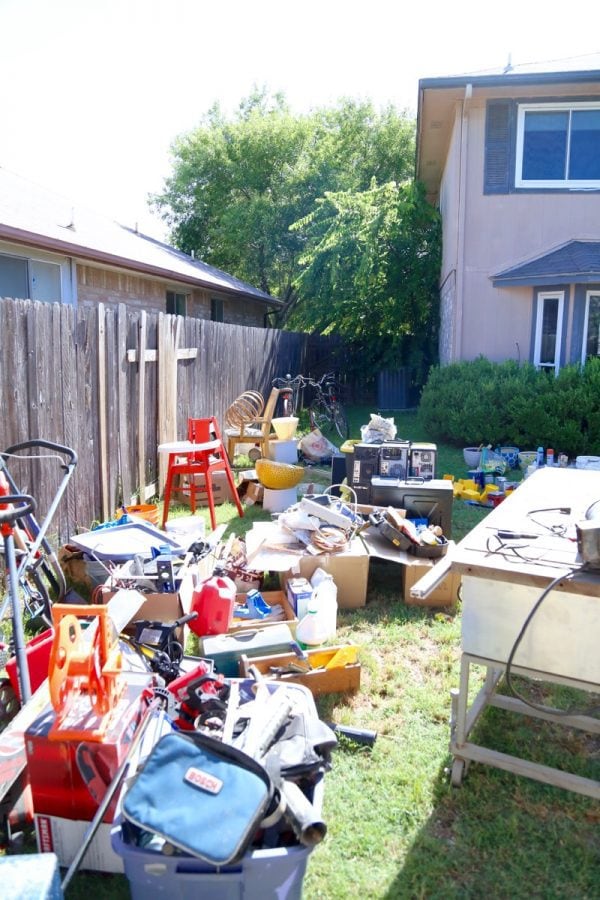 Once it was cleared out, Corey and his dad ripped up the flooring. They realized very early on that the problem was not necessarily warped wood, it was (ridiculously) poor construction. I don’t fully understand all of the issues, but the gist of it is that when the workshop was built, it was done wildly improperly – the center beam was cut in two (should be a solid piece) and was also too large, which meant it immediately buckled up towards the center of the room, and then he just went ahead and nailed the plywood onto a not-at-all-level support system. There was no warping, there was just bad building.

There was, however, a ton of wood rot, termites, and brown recluses. Fun! It took quite a bit of extra time to deal with the critters and get everything clean and ready to go, but eventually we ended up with a shell of a workshop and a dirt floor. 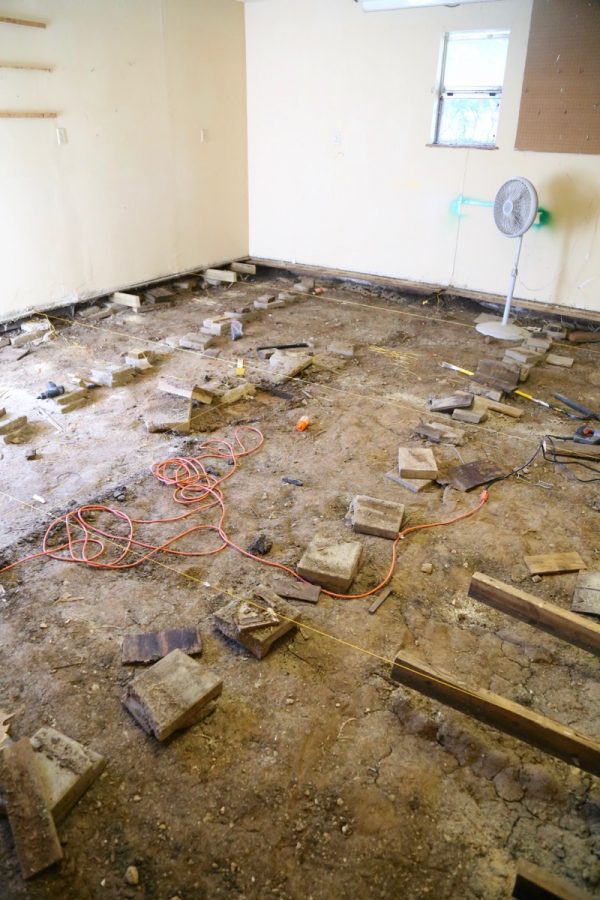 Corey was pleased to discover that the walls themselves were actually level – we had worried that the whole workshop was completely off-kilter, given how insanely bad the floor was, but the room itself was totally fine, which meant their job wasn’t too difficult. To put it all back together, they just re-built the joists underneath the flooring and then laid new plywood on top. I’m making it sound like it was a very simple job – it was not. I don’t have many pictures because I was inside taking care of Jack while they worked, but just know that it took a lot time, a lot of sweat, and a little bit of cursing. 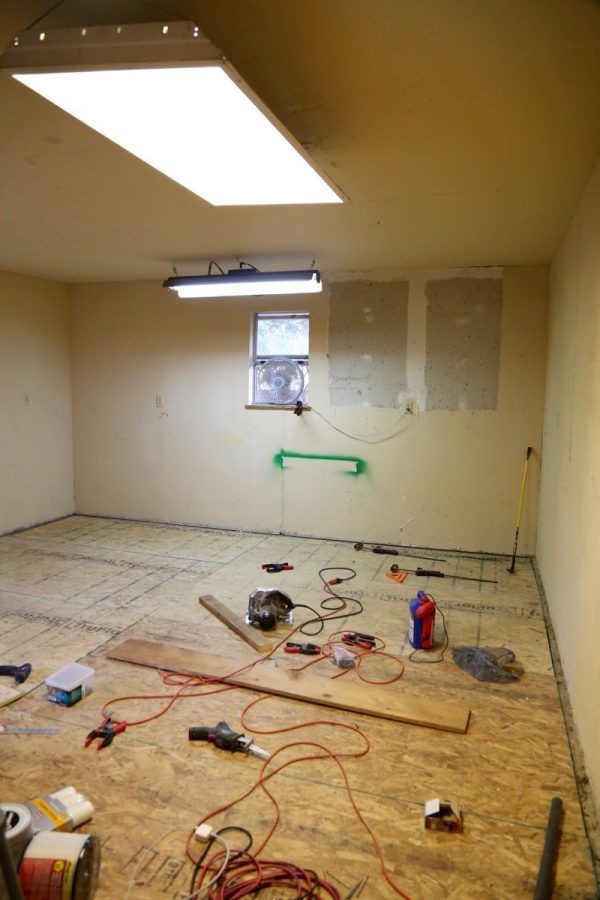 But after some work…we (finally) had a workshop again! I wanted to start with a nice, clean palette, so I grabbed some leftover white paint and gave the whole room a couple of fresh coats. The walls before were yellowed, dirty, and splattered with paint from projects over the years, so it made a world of difference to start off with a clean slate. I had planned on painting the ceiling a fun color, but as I got to work painting it I remembered that painting ceilings is probably the most horrible job in the entire world. I was not about to spend the time to get it looking perfect for the workshop, so I decided to stick with the same color as the walls. 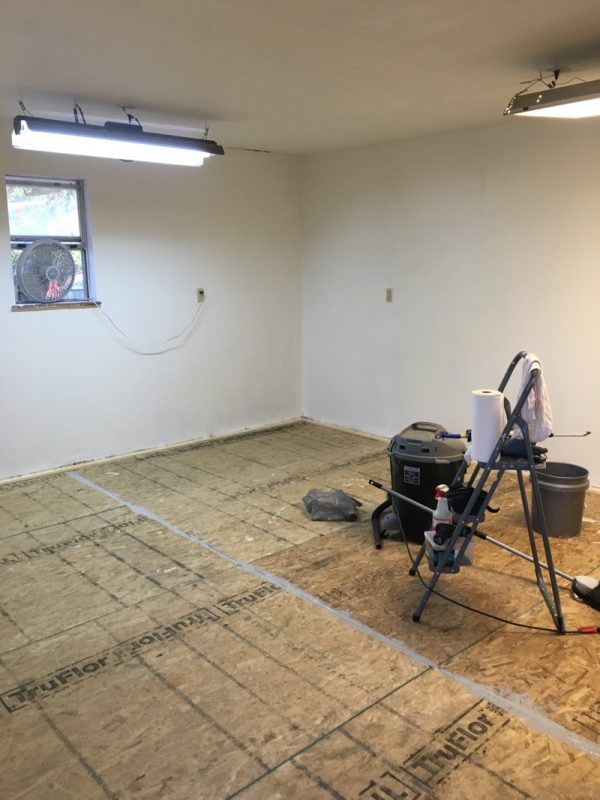 We also decided to paint the flooring. It’ll ensure a more durable, easy-to-clean finish over the years, especially with all of the work that will happen in there, and I think it looks pretty great! We used Valspar porch & floor paint in light gray– the guy I talked to at Lowe’s recommended the oil-based paint because it’s more durable, so that’s what we went with. Oil-based isn’t my favorite paint to work with (it takes forever to dry and it’s hard to clean off of yourself!) but it’s incredibly strong, so it was the perfect route for this room. 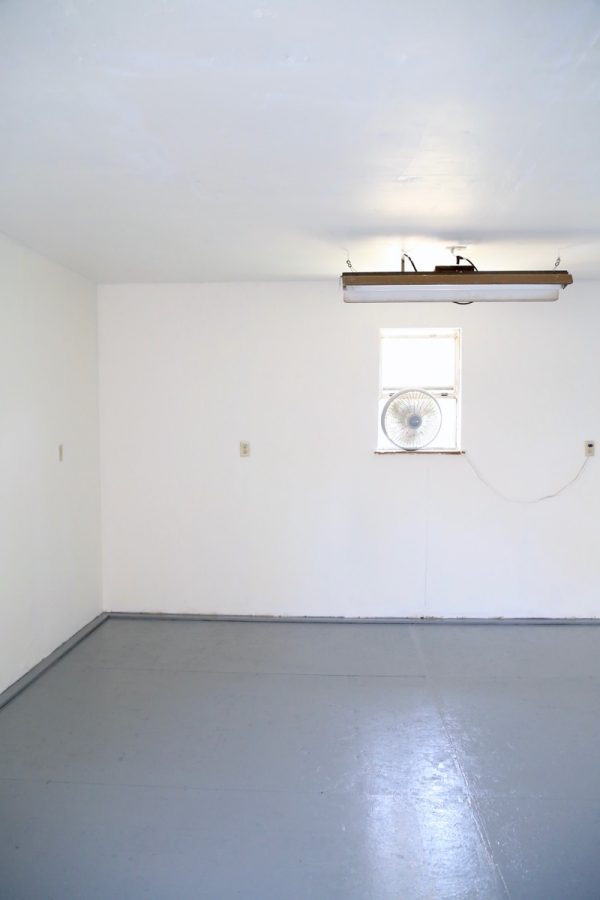 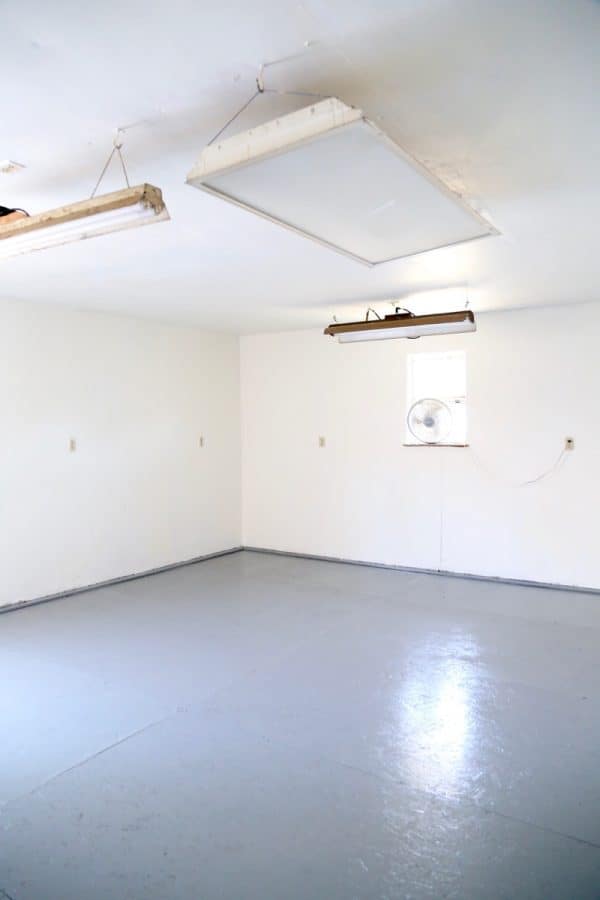 Originally our plan had been to go ahead and tackle a bunch of organization projects in here immediately, but our budget was totally blown on the flooring thanks to all of the unexpected roadblocks so that wasn’t an option. I promise that’s coming, though! Now that we’ve got started, we’re determined to see this thing through!

For now, we got everything as organized as we possibly could and put it back in the workshop in an orderly manner. The plans on the horizon include a new workbench, pegboard storage, and lots of open space so we can actually get some work done in there!

You know I’ll be updating you as we go along, but for now does anyone have any genius tips for affordable ways to keep a workshop organized and functional?