I often get questions about baby sleep and how to ensure you’re getting the most sleep possible when you have a young baby. Back when Jackson was an infant, I wrote two posts about sleep training (see the post on nighttime sleep here, and the post on naps here) and to this day they’re two of the most visited posts on my site.

I think it’s safe to say we all take sleep very seriously!

So, I figured with Grant it only made sense to share a bit about his sleep too, since sleeping is clearly a crowd favorite.

I don’t blame you. It’s my favorite, too.

Grant is a great sleeper (most of the time), and at 15 weeks, he has just started sleeping about 12 hours a night. Naps are still a total mess most days, but with Jackson we didn’t get those under control until he was 5 months old, so I’m not terribly worried. I’d say that, while your baby’s personality will have a lot to do with how they sleep, there are definitely some steps you can take to make things a little easier on yourself.

Sleep training shouldn’t formally start until a baby is about five or six months old, but there are plenty of things you can do in the early months to lay the groundwork for great sleep later on. Today, we’re going to take a look at all of the tips and tricks I have in my arsenal for baby sleep in the first three months. The “fourth trimester” can be a really difficult time for many parents thanks to the sleep deprivation, but with some effort and lots of patience, it doesn’t have to be all bad!

Before we dive in, I want to share a few of the products we use and love for baby sleep. I’m not an advocate of spending tons of money on fancy baby sleep apparatuses – you can only use them for a few months, and in the end you aren’t really creating good habits with them. Instead, I have a few simple tried and true favorites that help lay a foundation for great sleep later on! 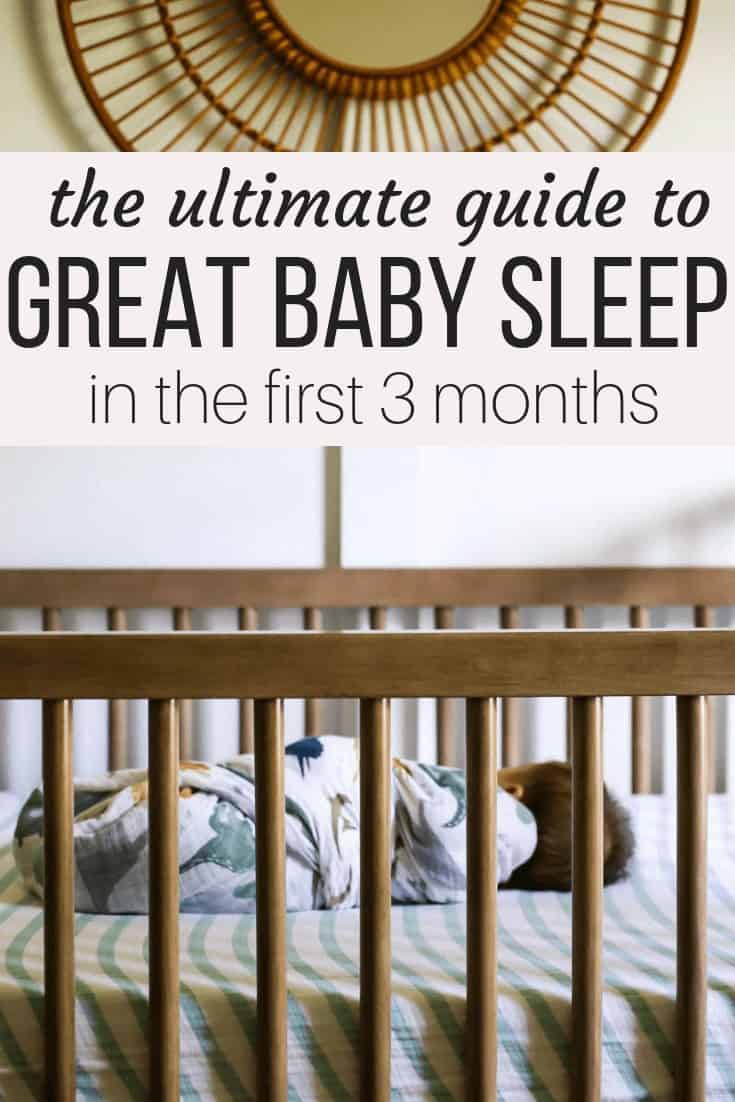 Okay, let’s do this! Remember that while all of these tips worked well for us, your mileage may vary. Babies who have colic, other health issues, or just aren’t great sleepers may not see the same results. But, we have two kids and have great results with these techniques with both of them, so I think it’s safe to say they work! 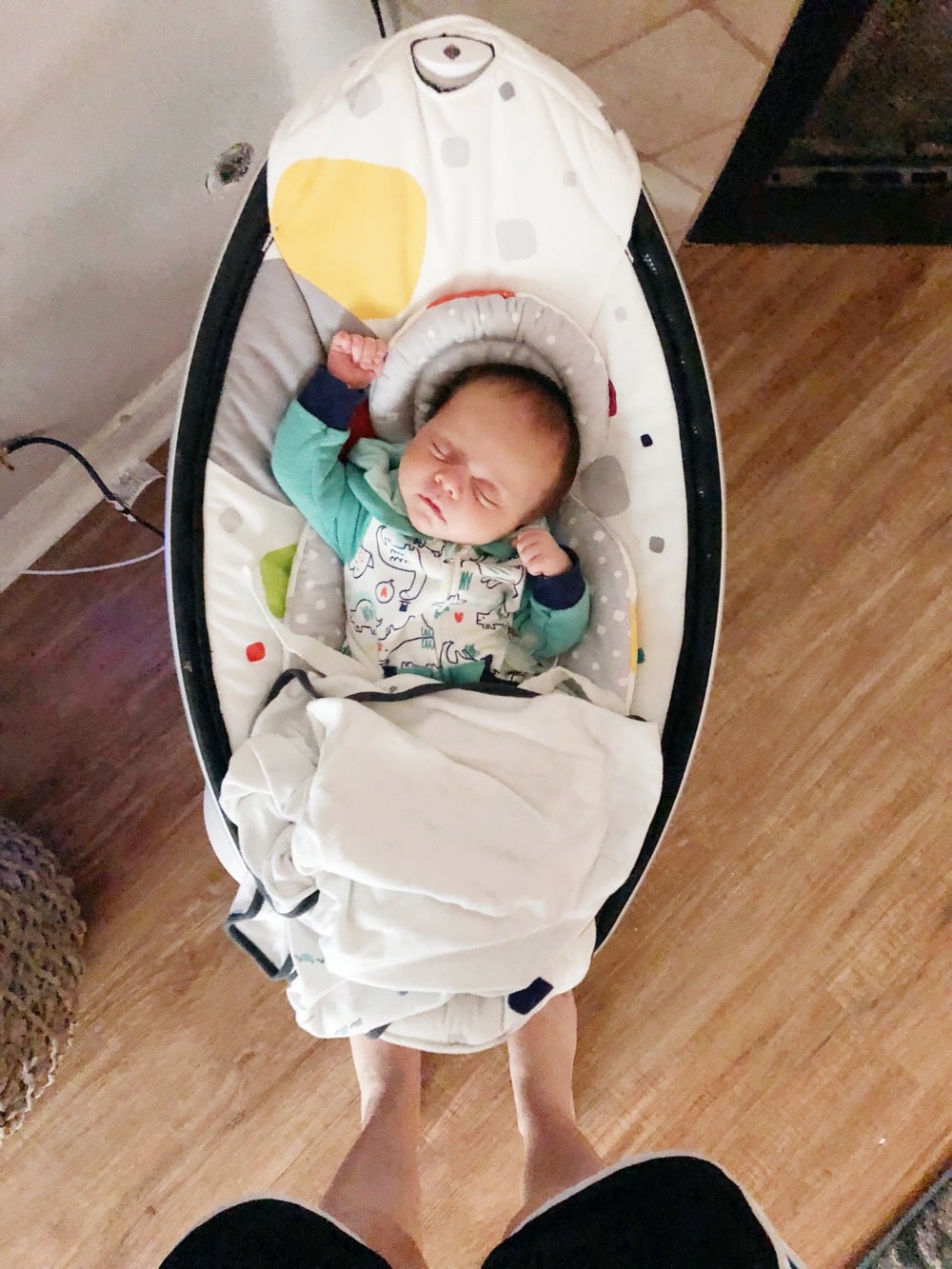 The first month is all about survival mode when it comes to baby sleep. Squeeze it in when and where you can, and don’t stress about creating habits at this point. Grant slept in a bassinet in our room for nighttime sleep, and for daytime sleep we were all about the cuddles. Naps were either on our chests or in the baby carrier. Even though you really can’t create any bad habits at this point, there are a few things you can do to encourage your baby to learn the difference between nighttime and daytime and to lay the groundwork for great sleep in month two.

Here are a few tips: 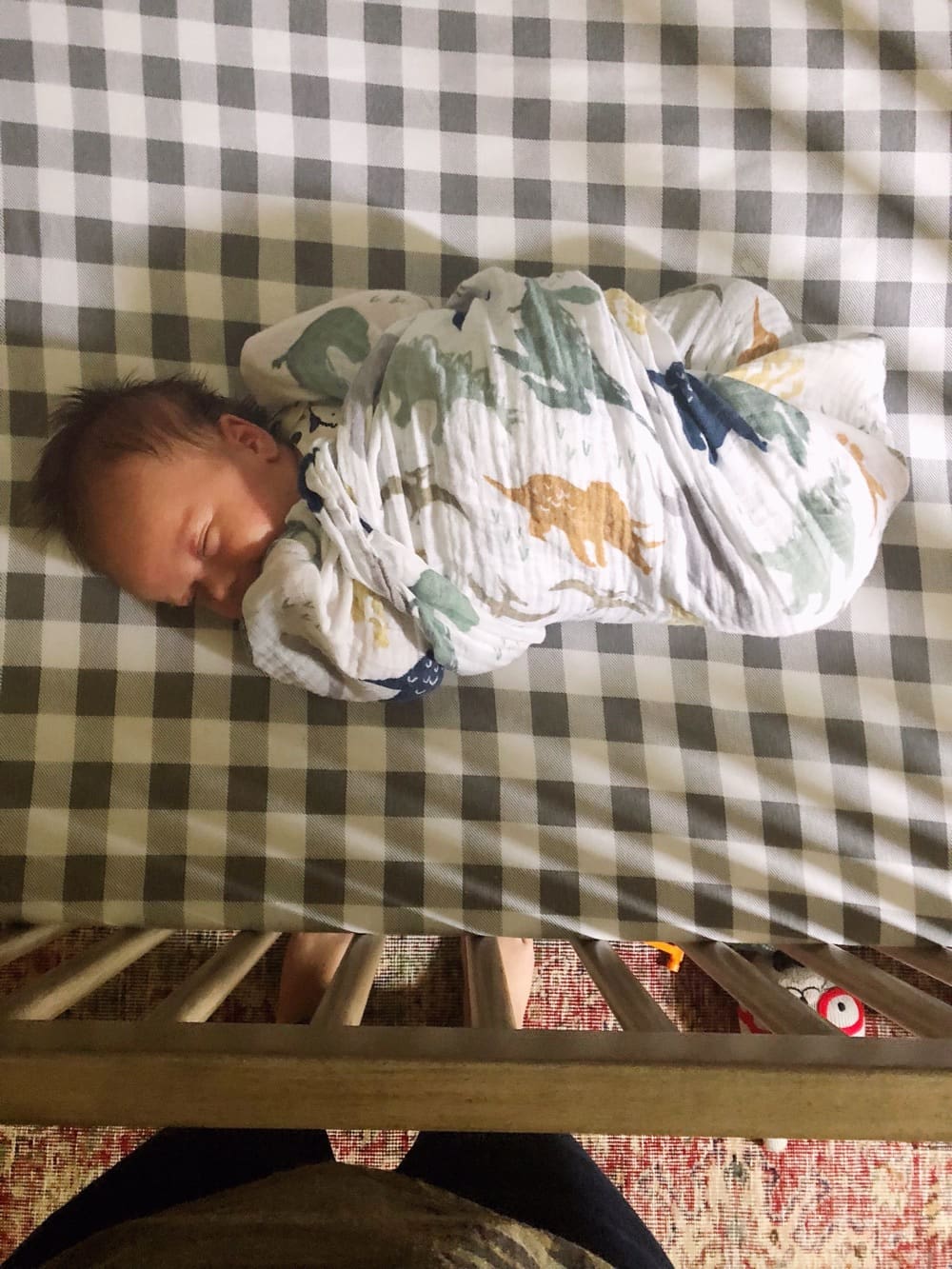 Here’s a look at what we did in the second month:

Here’s where our schedule started to solidify a bit more! It was harder to keep a good schedule on Fridays and on the weekends when Jackson wasn’t at school, but on Jackson’s school days we were very consistent. We tried to keep a pretty similar schedule on the non-school days, but sometimes life happens. At two months, babies still sleep for a lot of their day, and awake time is very short! The schedule below is the “perfect day” schedule – often, the afternoon nap just wouldn’t happen in the crib and I’d wear Grant in the wrap while he slept. But, this is what we always worked towards! 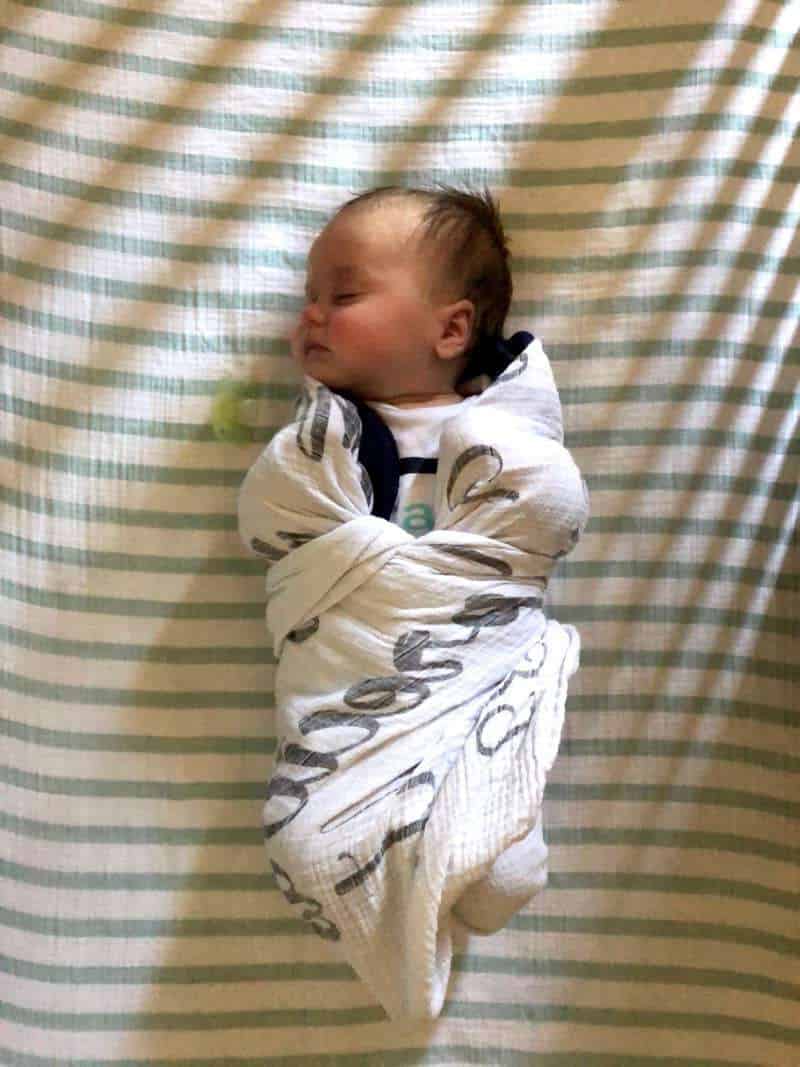 At this point, both you and your baby should be in a pretty good routine and understand each other a little better. You should be able to easily recognize your baby’s sleep cues, and you should have a pretty good idea of how long they can handle being awake before a nap is needed. For us, we noticed a definitive shift in Grant’s sleep during month three – the schedule became more and more important, and he started to want to nap in the crib more often versus napping on us. Of course, at three months he still struggled to stay asleep in the crib during the day. With lots of consistency and patience, though, most days we were able to get the majority of his naps in the crib (though, at this point, baby daytime sleep can still be a bit of a mess as your child figures out a schedule and learns how to self-soothe!).

Here are my tips for month three sleep:

Our schedule in month three looked pretty similar to month two, but it was much more set in stone. This was the time when I began to be able to really predict how each day would go, and Grant settled into taking four solid naps each day. Of course, you should remember that at this age everything still kind of rotates around feeding and wake times rather than the clock. For example, Grant eats every 3-ish hours, and is usually up for 60-90 minutes before needing another nap – so if he sleeps in 30 minutes later than usual in the morning, everything is pushed back a bit!

Note: This is a very rough schedule, and it’s the one we followed at the end of his third month (right as he turned three months old). The schedule shifts a lot during this month, and it wasn’t until right when he turned three months old that we really had a super solid schedule. Also, remember that sometimes the sleep times are longer or shorter – it just depends on his mood! Baby sleep can still be very, very unpredictable at this age!

Newborn sleep is a tricky business, but remember that it’s short-lived! Soon your baby will be sleeping 12 glorious hours a night plus naps and you won’t even know what to do with yourself.

And, honestly? Once those middle-of-the-night nursing sessions are done for good, you’ll probably look back on them wistfully and remember how sweet it is to spend some time cuddling with your baby in the early hours of the morning when it feels like the whole world is asleep.

If you have any more questions about our baby sleep experience, let me know! If there’s enough interest, I’m happy to do an update when Grant gets a little older, too.