We tackled sleep training for our son around 5 months old and had tremendous success, so I’m sharing some of our sleep training tips here to help you get started. If you want to read about how we tackled getting Jackson to sleep through the night, click here for that post. This post is all about nap time!

We recently decided to nap train our son, Jackson, and I’m pretty adamant that it was one of the best decisions we’ve ever made. It’s totally changed the way we do things around here, and we’re all sleeping better as a result. So, let’s talk! 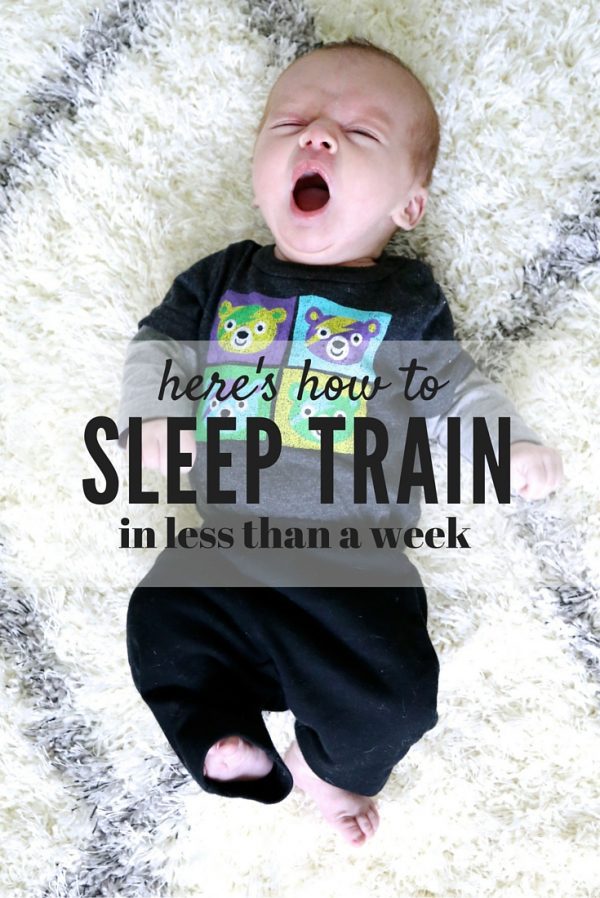 First I want to talk a little about why we chose to nap train, because I think it’s important to carefully consider what you’re doing with naps. Since about 6 weeks, Jackson has (had!) refused to nap in his crib at all. He’d sleep on me or Corey, he’d sleep in the Moby (which, by the way, is the best invention ever), and he’d sleep in a bouncer or swing at daycare (but never at home), he just wouldn’t sleep in the crib. We tried a lot of different things, but when I went back to work at 7 weeks it just wasn’t a priority. I hated being away from him all day long, so when we got home I was happy to let him snuggle up with me. And on the weekends, I felt like I needed to catch up on time spent with him, so it was no problem to spend half my day chained to the couch while he slept.

This worked for us for a couple of months, but towards the end of the school year, I got really tired of it. I loved the cuddles, don’t get me wrong, but it was reaching a point where I had zero time that wasn’t being taken up by Jackson in some way, and Corey couldn’t ever get him to sleep as easily as I could so nap duty generally fell to me. I kept telling Corey we needed to do something about it, and we tried a few times, but he would just scream in the crib and I didn’t have the heart to let him cry (plus he was still so young, he definitely wasn’t ready to cry it out).

Corey and I kept agreeing that we would wait until school got out to tackle the issue, because we were afraid that if we pushed the crib naps he wouldn’t sleep as well, which would affect night time sleep, which would affect our ability to function at work each day. Plus, if I sat down on the couch with him he would almost immediately snuggle up into me and fall asleep, so we didn’t want to mess with such an easy way to get him to nap.

One day, a couple of weeks before school got out, I was frustrated with being stuck on the couch with him, and he was about 4 months old (which some people say is a good time to start sleep training), so we decided to try and let him cry. It was a disaster. We lasted about 30 minutes (with frequent checks) before we decided it just wasn’t for us, ran in, and grabbed him. He immediately fell asleep in my arms, and was clearly upset. We both agreed we were never doing that again.

The weekend after school got out, Jackson’s naps went to hell. He suddenly wouldn’t sleep at all in my arms. I’d settle in on the couch like we had always done, and he would start arching his back and screaming. If I tried to rock him (which he usually loved), he would try to push his body as far away from mine as possible, crying the whole time. The only time he was calm? If I plopped him down in the crib.

The only problem was, he still couldn’t fall asleep very well in the crib. If we stayed in the room with him he was okay, but he just wanted to talk to us and give us smiles. But if we left, he cried. We tried the swing (nope), the bouncer (no way) and the Moby (fell asleep while Corey was walking outside with him, woke up as soon as they walked back in the door). One day that weekend he spent 7 hours with no more than a 15-minute catnap because we just could not figure out what to do.

At this point, we knew we had to revisit sleep training. He was giving us very clear cues that he was ready to nap in the crib, he just needed some help figuring out how to fall asleep. He was also showing us that if we were in the room, he couldn’t sleep because we were too distracting – and he was starting to fuss a bit before falling asleep no matter what, which gave us the idea that maybe he was a tension releaser, not a tension increaser like we originally thought.

So, after lots of thought and talking it over, we decided to re-visit crying it out. We gave ourselves one week and said we would stick to it for that long, but if it wasn’t improving we would ditch it and go for something else. I took notes on my phone and even made a graph (because I’m a data nerd!) of how his naps went over the course of the week, and we were pretty shocked at the results.

Our nap routine is as follows: 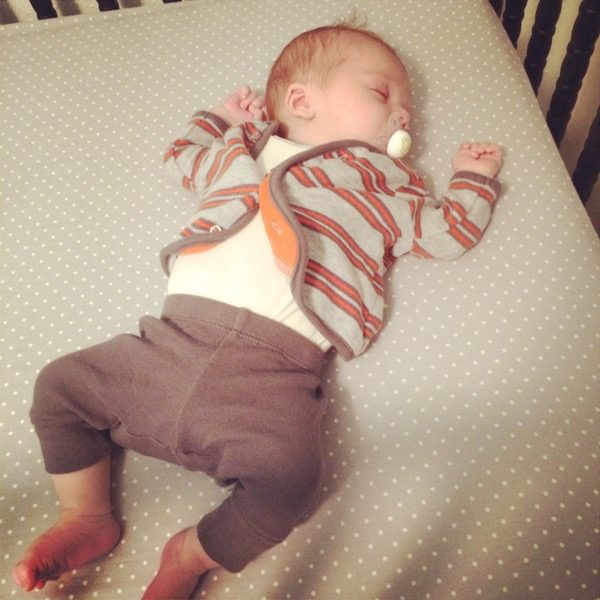 Once I leave, we’re basically doing a modified Ferber-style approach – when (if) he starts crying, I check the time and I go peek in on him after about 5 minutes. I give him his pacifier back if necessary, pat him a few times, and kiss his forehead before leaving again. We’re not super consistent with the check-in times. Sometimes I’ll do a few 5-minute increments before going to 7 minutes, then 10, sometimes if he’s just fussing I go straight to 10-minute increments. It all depends on how hard he’s crying and if I think he’s about to fall asleep, but at this point, he really only fusses if he loses the pacifier in the first few minutes, so I’ll pop it back in and he goes right to sleep.

How did nap training work for us?

Okay, let’s get to the fun part – the data. When we first started nap training I couldn’t get enough information on how this had worked for other people, so I’ll give a rundown of how things went for our first week. We were pretty surprised at how quickly it worked, which to us just confirmed that, as we suspected, Jackson was ready for this!

As of now (a little over two weeks in), he’s crying no more than 5 minutes when I put him down, and the vast majority of the time he doesn’t cry at all.

The interesting part is that the nap length varied quite a bit for the first week, but by the second week (last week) naps were getting consistently longer and longer, and now it’s looking like he’s getting ready to consolidate down into three long naps a day. We’ll see what happens!

But, what was most interesting to me was the night sleep. Right before we started this we were having some really rough nights, so I took notes on how things looked once we were nap training. Here’s how it went down:

Night before we started:

You get the idea – nap training very quickly fixed the issues we were having with night sleep, and things are still going strong. I think he’s in a transitional time with sleep right now because it looks a little different every night, but now he’s going down between 6:30 and 7:00 every night, waking no more than 2 times throughout the night for his pacifier (and going straight back to sleep, so it takes us under a minute to actually deal with), and then getting up around 5, then eating and going straight back to sleep until 7 or so. A few times he’s slept straight through for the whole 12 hours, so I’m hoping that becomes the norm! 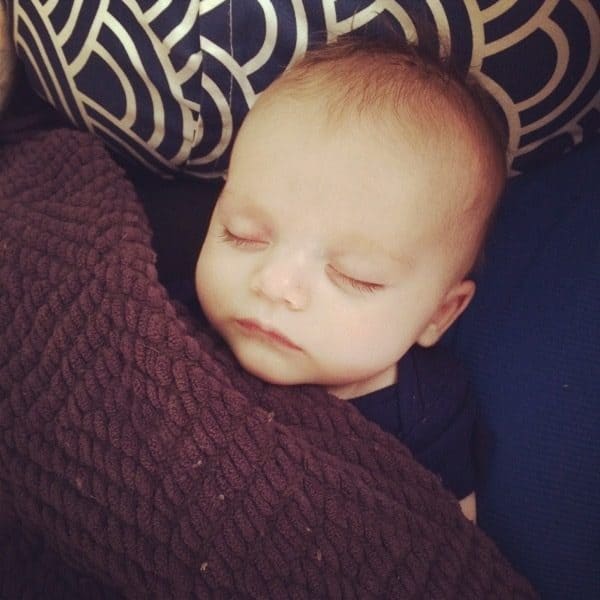 Here are our must-haves when it comes to sleep!

Long story short? We nap trained, it was a fantastic decision, I have my life back, and everyone is happy. Until the next sleep regression hits us, but let’s not think about that yet.

Anyone else want to chat baby sleep? How are things going in your house? If you don’t have a baby and are sleeping all night every night, tell me about that too…I want to live vicariously through you!