When you’ve got a small space for your baby, nursery organization is key. Here are my best tips for keeping your nursery and all things baby organized. 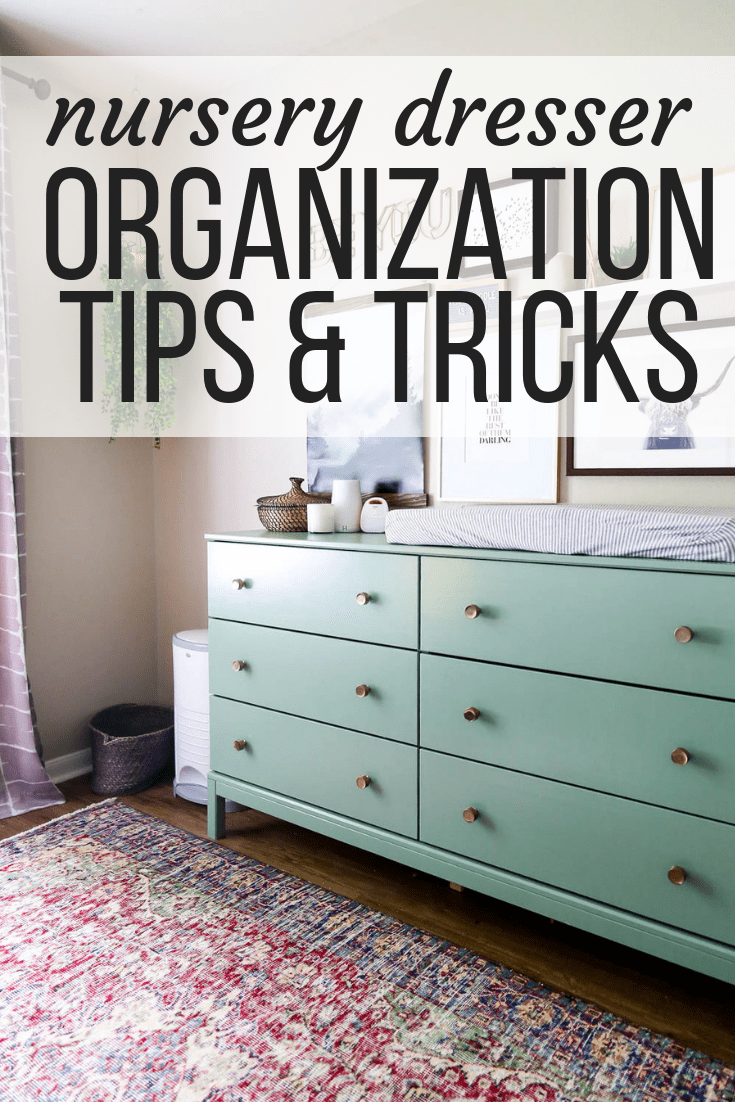 One thing that living in a small house has taught me over the last year (has it really been almost a year?) is that organization is vital.

I cannot emphasize this enough – our family has a lot of stuff, no matter how hard we try to keep our belongings to a minimum, and the only way we can survive living in a 1,100 square foot house is by making sure every inch of it is as organized as possible.

Grant’s nursery is, honestly, probably the most organized room in our entire house – and there’s a reason for that. Babies are exhausting, and they need a lot of stuff. Often at inconvenient times, like 2:30 in the morning. And I don’t know about you, but when I’m dealing with a diaper explosion in the wee hours of the morning and I need to locate a new diaper, wipes, fresh pajamas, and a new swaddle for my kid, I want to be able to grab everything I need on autopilot. Because I’m sure I don’t have to tell you that my brain isn’t exactly functioning at full capacity when it’s the middle of the night, I’m dealing with a screaming baby, and I’m running on a grand total of approximately zero hours of sleep.

But, keeping the nursery organized is a tiny little step that makes the whole newborn thing just a little bit easier. And I’ll take every single win I can when it comes to making my life easier right now, you know what I mean?! 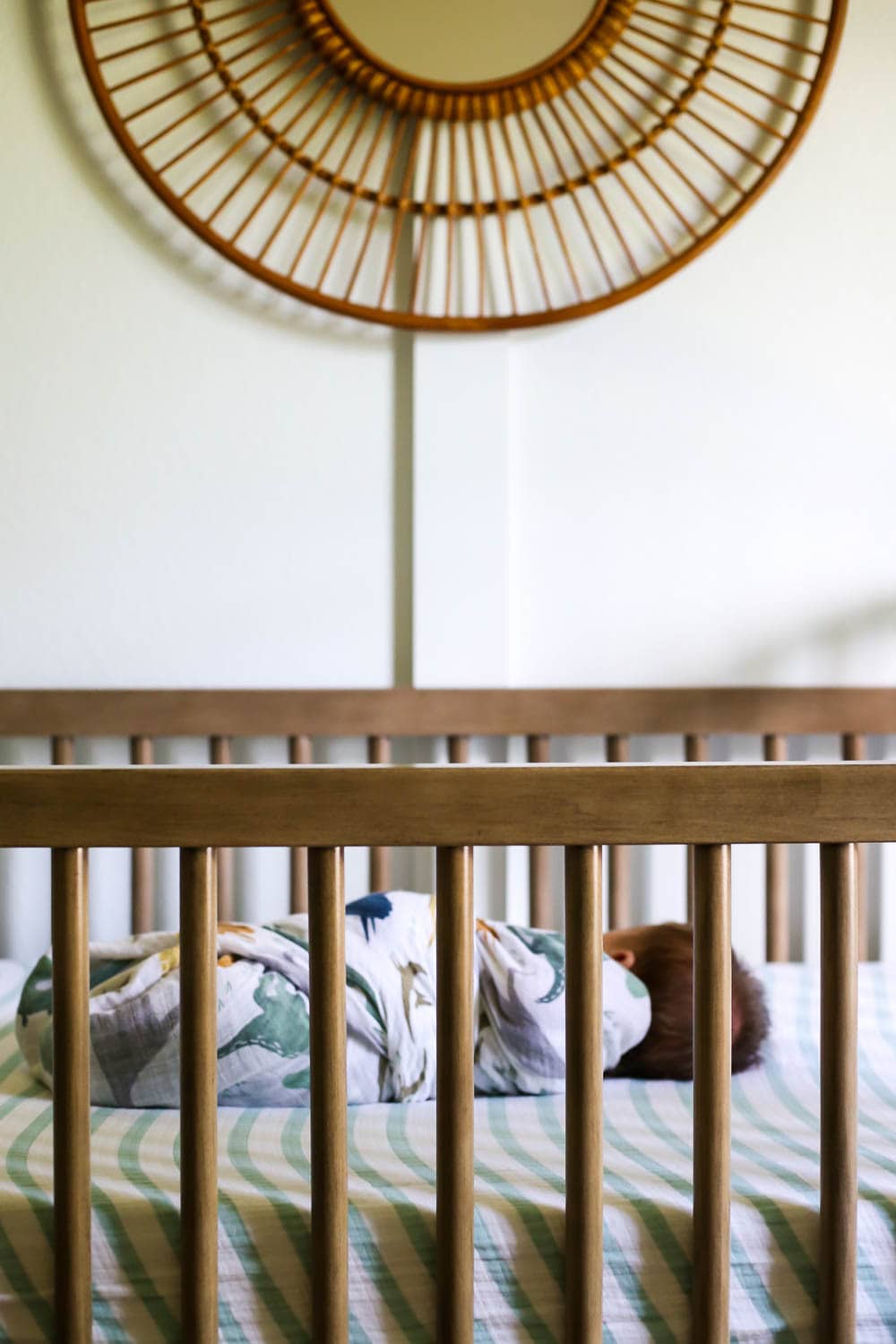 So, for all of you other sleep-deprived (or soon-to-be-sleep-deprived) mamas out there, I wanted to share a peek inside all of the drawers and behind the closet doors in the nursery so you can see exactly how I’ve organized everything. My tips may or may not work for your exact setup, but when I was planning the nursery I was soaking up every single blog post I could find about nursery organization to make sure I didn’t miss anything that might help! So, here’s my addition to your nesting-induced frenzied research.

First, a few general tips. I might not be the most seasoned parent out there (though now that I have two kids I think I definitely can call myself experienced!), but I’ve designed and organized two different nurseries and neither of them was larger than 10X10 – it’s a manageable size but it definitely requires some serious creativity to organize such a small nursery!

Okay. Now that you’ve got a few general tips, let’s dive into how I actually organize our nursery. 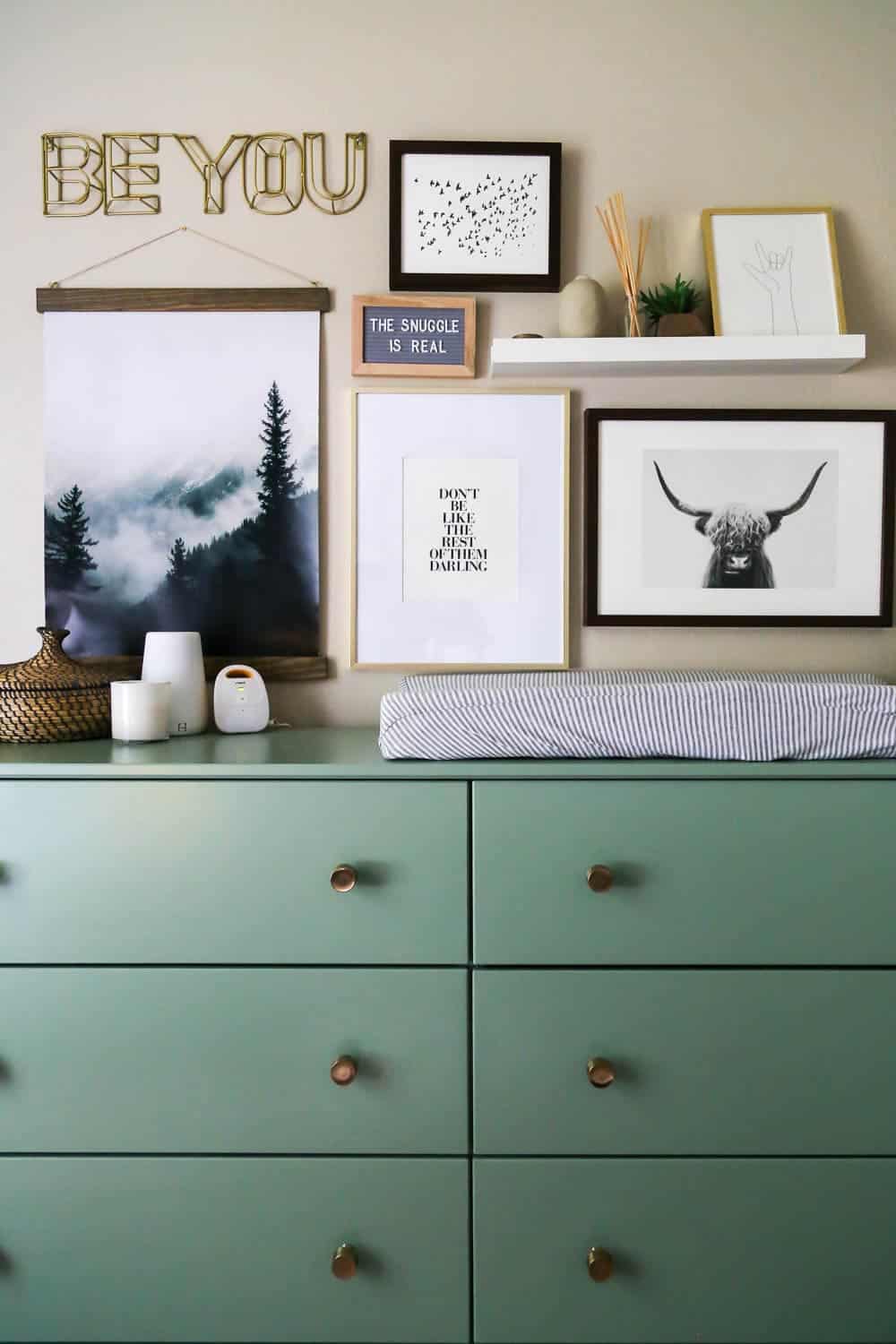 Here’s a peek inside Grant’s dresser drawers. Remember, things are constantly shifting and changing, so I’ll be sure to note where things are different. 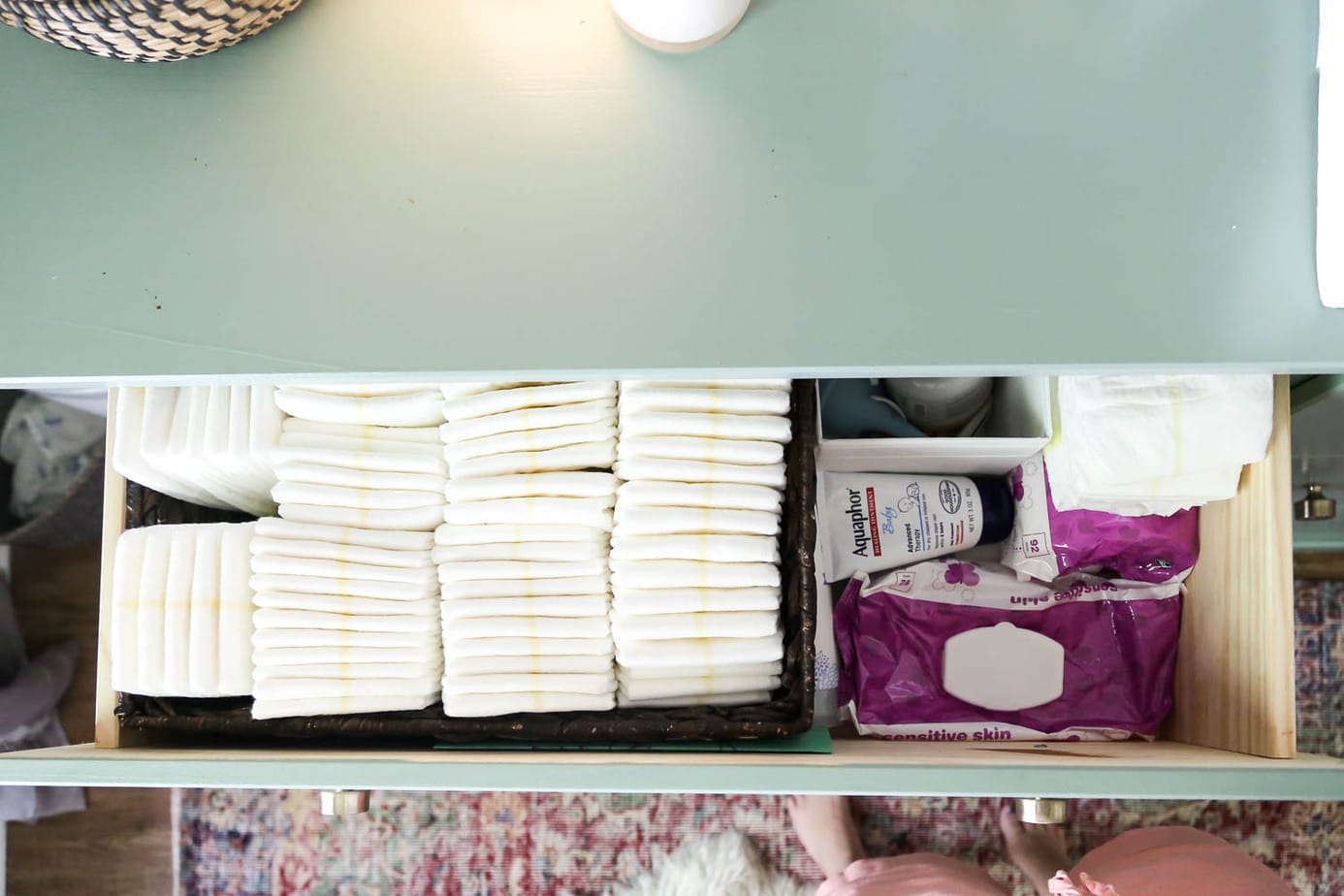 The top left drawer is where we keep all of our diaper supplies. I have a small basket in the drawer that holds his current size of diapers, and I just fill it up from our stash as needed. We also store a few packs of wipes in here, along with lotion, diaper cream, and other baby grooming supplies (in the small IKEA storage box you see in the back). This is (obviously) the most-used drawer in the dresser and it’s vital that it stays organized at all times. 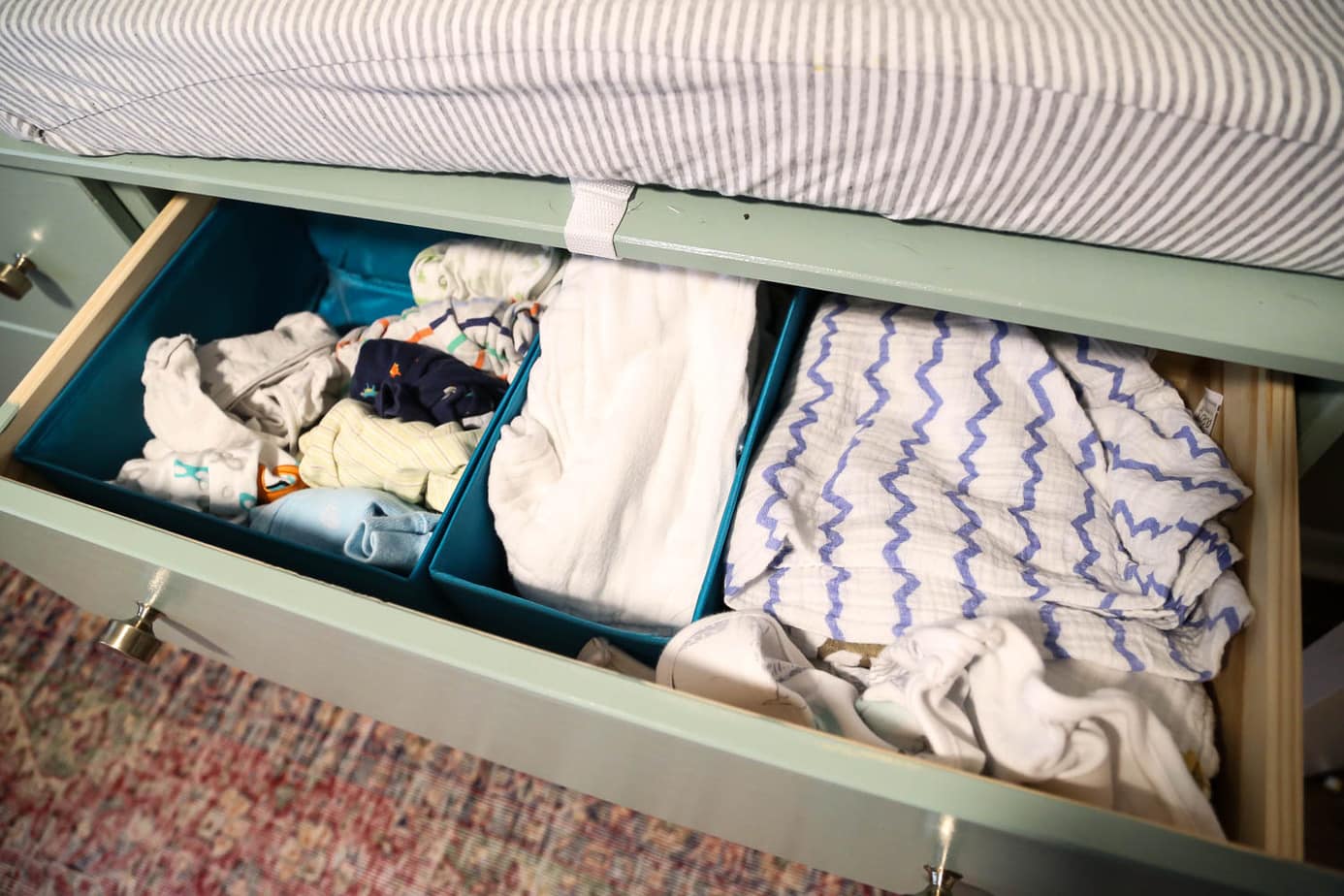 The top right drawer is for pajamas, swaddles, and burp cloths. We like to use Gerber brand cloth diapers as burp cloths (they’re super absorbent and just the right size!), so I’ve got a bunch of them in a basket, another basket for pajamas, and then we keep his swaddle blankets folded up on the other side. We use these blankets for swaddles (but I really want to try this one). We also have a few of these velcro swaddles because I’m not as great at swaddling as Corey is, and Grant often escapes my swaddles. So, if I get frustrated in the middle of the night I can switch over to these and he’s less likely to break free (which means more sleep for everyone). 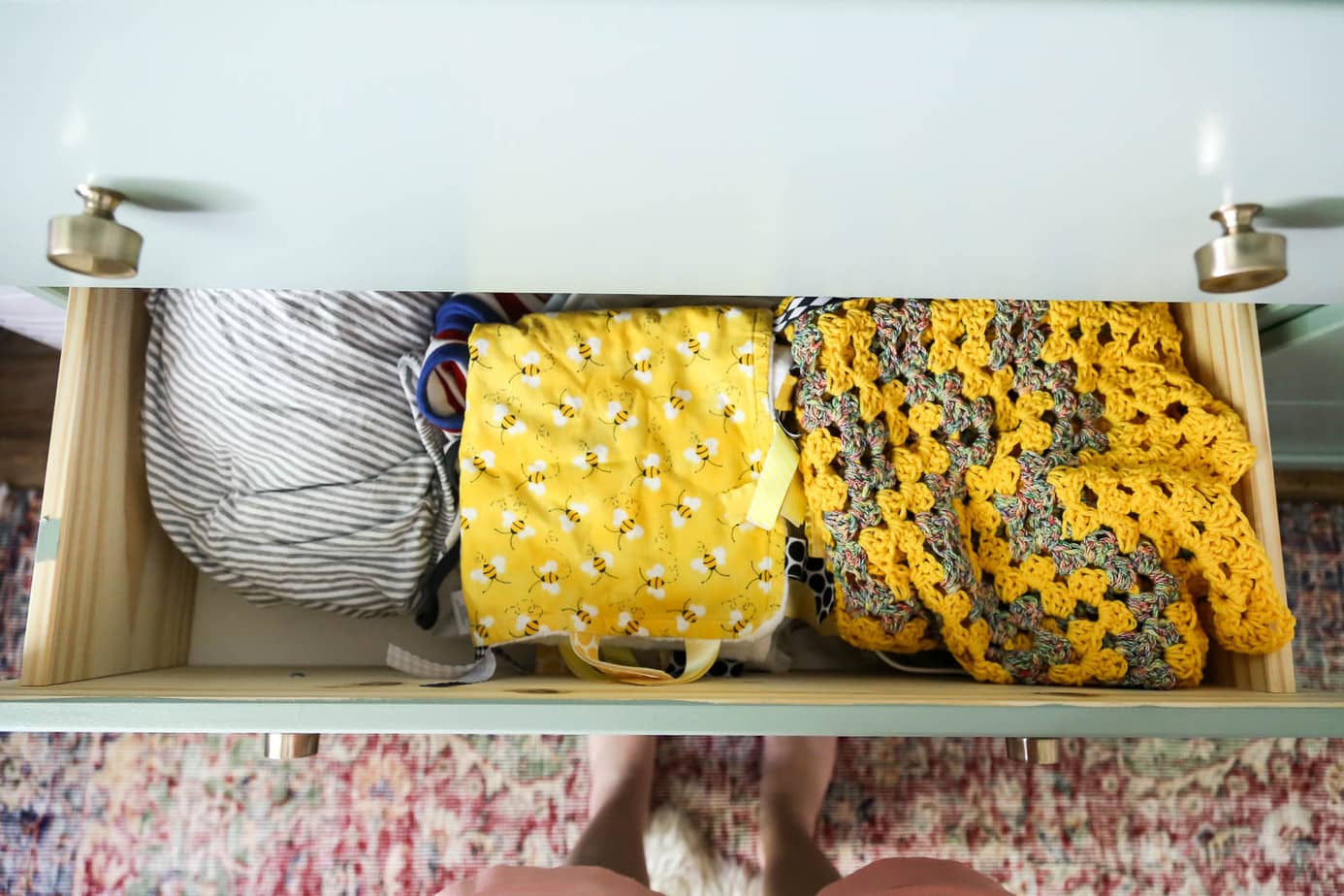 This is where we keep extra linens for his bed and the changing table, along with all of his non-swaddle blankets. Honestly, we tend to use the swaddles more than anything in this drawer (they’re just so soft!), but these are a great backup when all of the swaddles are covered in spit up or when we need something a little heftier. Also, extra crib sheets and changing pad covers are essential as we all know. Essential. 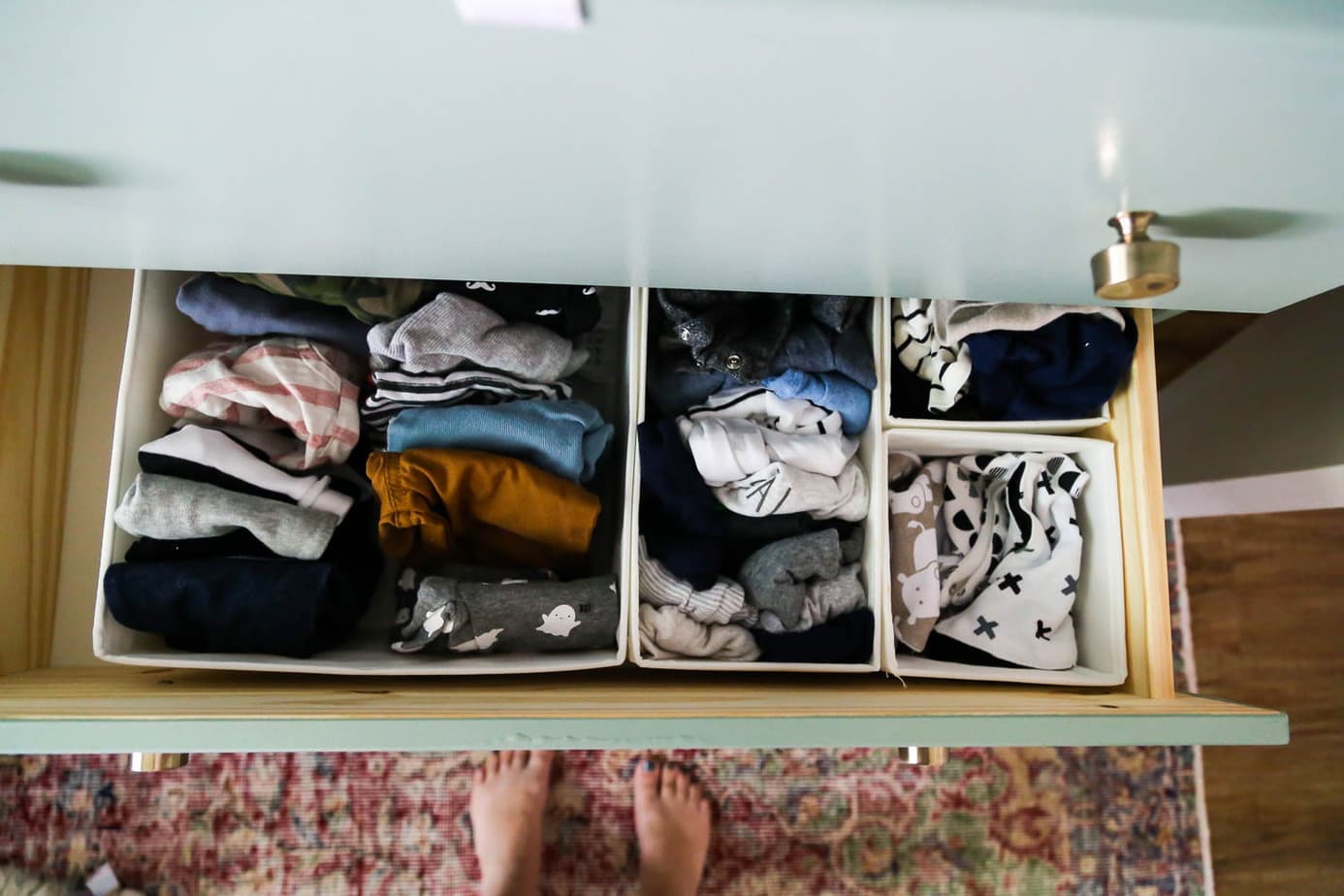 This is the clothing drawer – and the first drawer where there has been a pretty significant change since he was born. When Grant was still in newborn clothing, I kept all of his clothes in this drawer (because, remember, newborn clothes are way too small to hang up!). I used one larger storage box for onesies, a medium-sized one for pants, and then two small boxes for drool bibs and hats. Now that he’s in 0-3 clothing, this drawer had to shift a bit – I keep his pants in the larger basket, and I’ve moved his shoes and socks to this drawer as well (though, this photo was taken when he was still wearing some newborn clothing, so the medium-sized basket holds newborn pants and a few larger onesies). 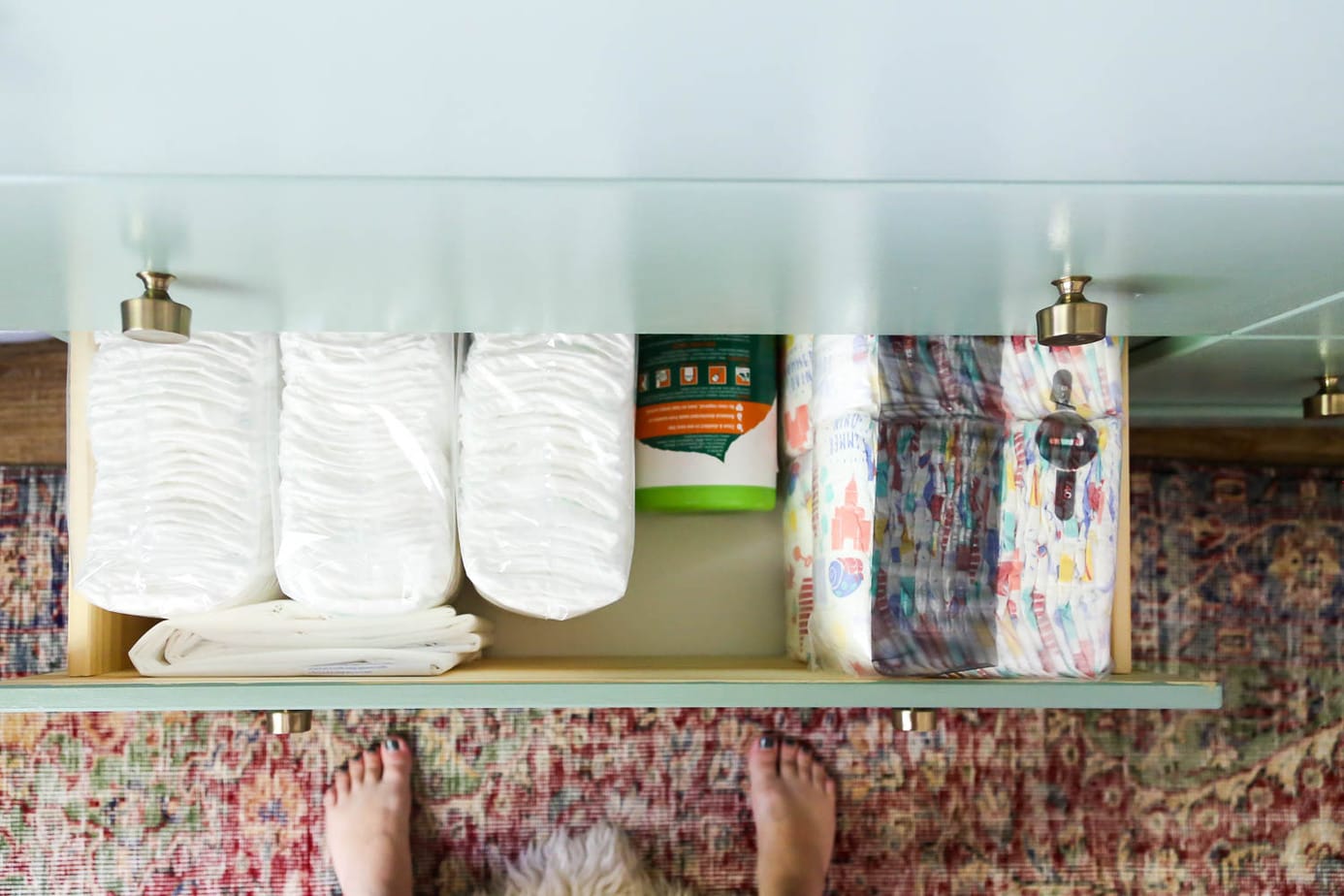 Now we get to the diaper stash. We didn’t really have much of a diaper stash with Jackson, so this is new to us, but my friends threw me a diaper shower before Grant was born and we’ve got quite a collection! This drawer holds all of our size 1 diapers – and once we go through these, I will probably continue to use this drawer for extra diapers that don’t fit in the diaper drawer (since that basket doesn’t hold a full box of diapers). 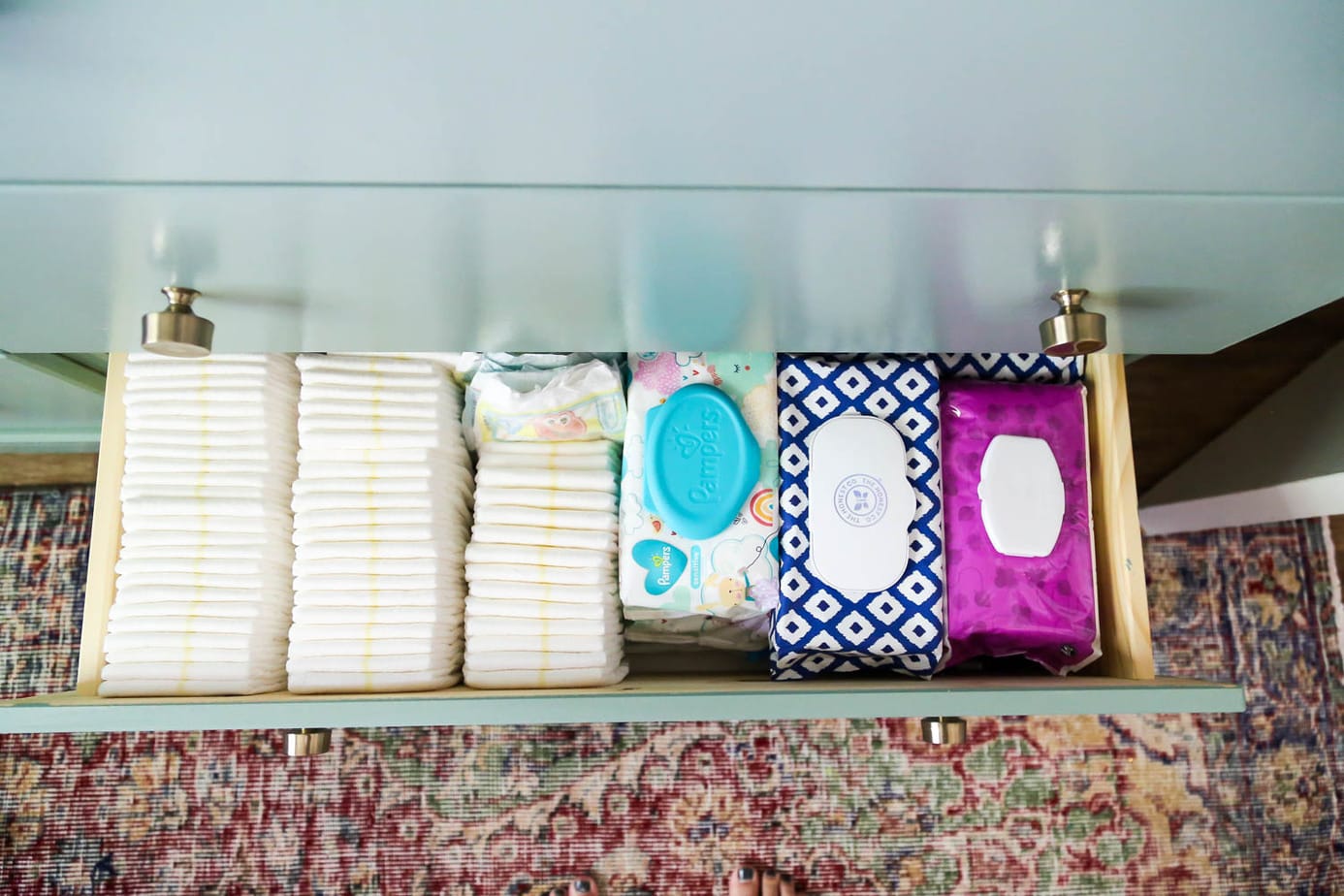 The last drawer in the dresser holds a bit more of our diaper stash, along with all of our wipes. Again, this stuff is from my diaper shower and we’ll probably go through it relatively quickly (in fact, we’ve gone through a good chunk of it since this photo was taken!). Once this stash is gone, I’ll probably use this drawer for baby toys – I’ve got a small basket in the closet right now, but I know it won’t contain the toys for long, since they seem to accumulate at a pretty alarming rate.

Annnnd we’ve got one more thing to talk about on the topic of nursery organization – the nursery closet! 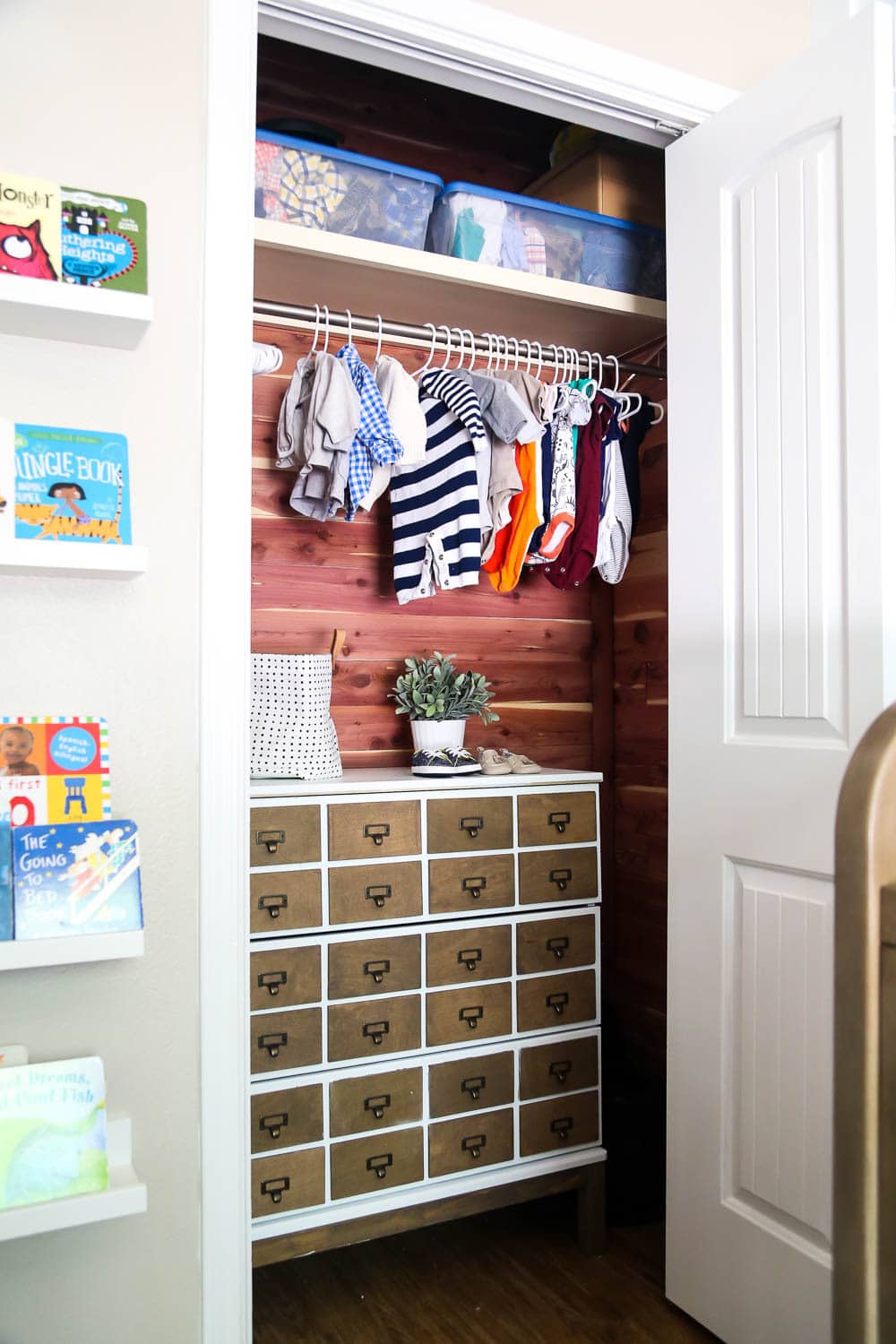 The closet is where I store the bulk of Grant’s clothes (obviously), including hand-me-downs from Jackson. The great thing about having two boys is that we get to re-use all of Jackson’s old clothing – the not-so-great part is that they’re 4 years apart which means we’ve got a lot of clothes to store! We don’t have a great place to store them other than the closet, so that’s where most of them are at (I have two boxes stored in the garage for now, but once Grant starts growing into some of what’s in the closet and I begin clearing things out, those will move into the closet).

I didn’t photograph these drawers because they’re much less organized than the other dresser, but here’s a rundown of what they contain:

The top shelf of the closet holds larger clothing (up through 18 months, I believe, then the larger stuff is in the garage for now), and then we’ve got a few random things elsewhere in the space. I keep his baby bath in the side of the closet when we’re not actively using it, and I also store my breast pump and his toys in here.

I think the closet will probably shift and change the most as he gets older – eventually, we’ll need to store even more toys and once he starts going through more of the clothes we’ll have less of a dire need for clothing storage. That’s exactly why we chose to just put a dresser in here rather than building a ton of built-in storage – we don’t know what our needs will be in a year or two, and we wanted to keep things open and flexible. Who knows – maybe he’ll be into giant toys like his big brother and we’ll need to build him some custom shelving too. 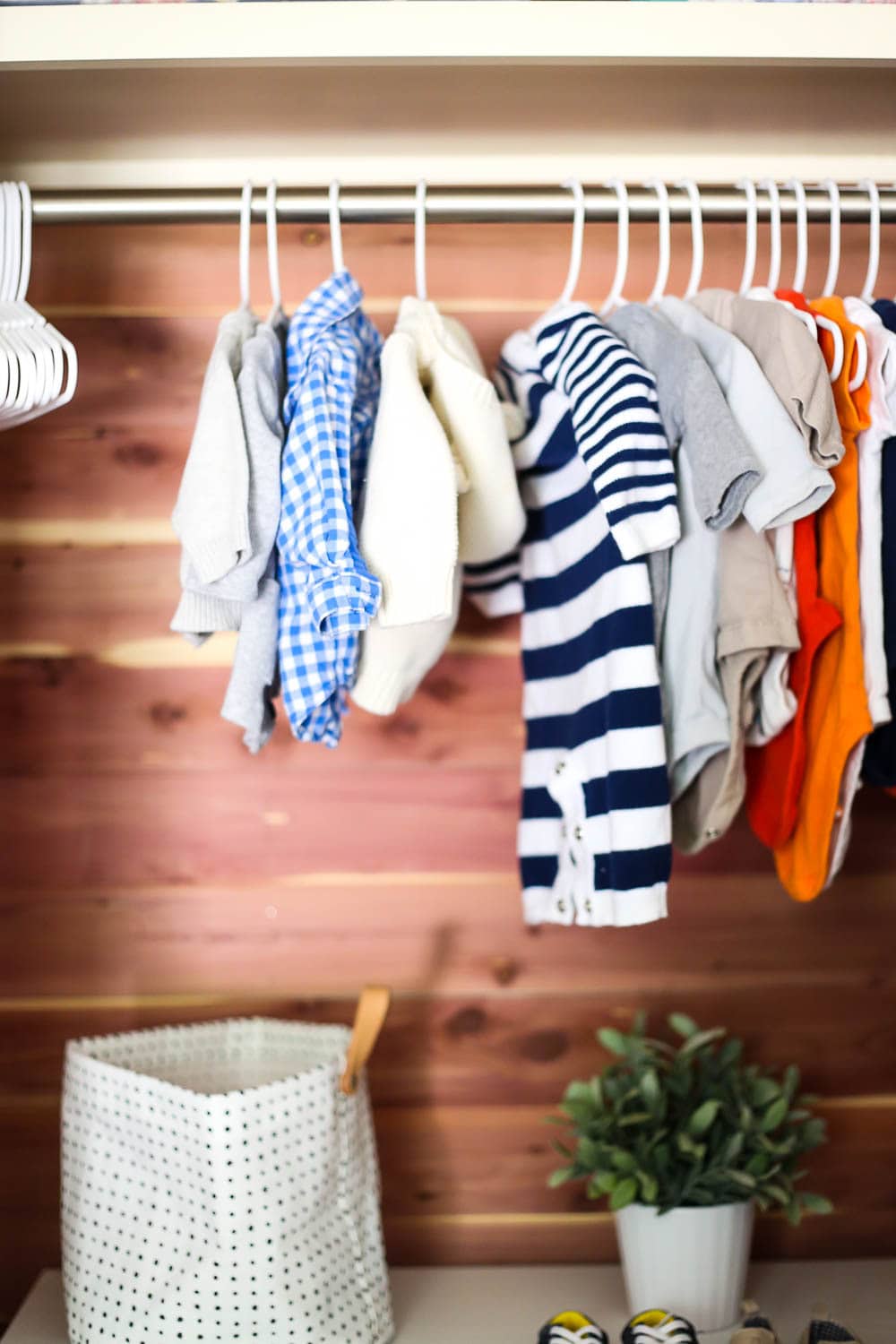 Hopefully that answers all of your questions about how we’re approaching nursery organization this time around. We’ve been much more intentional about it than we were with Jackson since we know what to expect a bit more, and so far it’s working well for us.

If you want to see more info about anything in the nursery, here are some related posts: